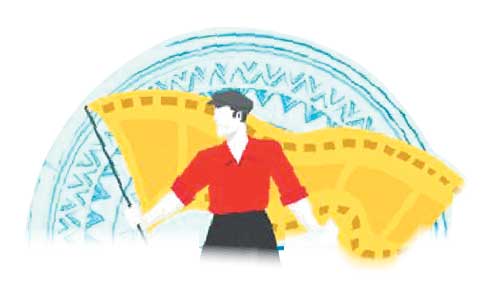 SMALL acts of kindness and heroism are often overlooked, with some of these stories known only to one person or local community. Those stories can now be told in film through Kidlat Tahimik’s Unsung Sariling Bayani (USB) Short Film Competition.

The USB Short Film Competition was launched by the Film Development Council of the Philippines (FDCP) in partnership with the National Quincentennial Committee (NQC), with the support of The Bureau of Learner Support Services — Youth Formation Division of the Department of Education.

Kidlat Tahimik, a National Artist for Film and Broadcast Arts, hopes the competition will balance the influence of foreign comic book superheroes on the Filipino youth’s mindset with stories of our Filipino real-life heroes. The film competition’s theme takes its inspiration from the 500th anniversary of the Victory at Mactan which was marked earlier this month.

Prior to earning the National Artist title, Kidlat Tahimik had always had the advocacy to produce more local stories.

“Bringing it this year is a good catalyser. Why not also use it as a good time to tell stories based on the theme of heroism by looking into our local neighborhood?,” he said in a video during an online press conference on April 27 over Zoom.

“We want to make the art of filmmaking accessible to them. Through this competition, we can champion its importance,” she said.

COMPETITION MECHANICS
The competition is open to stories depicting the life, times, and achievements of documented and verifiable unsung local heroes. The entries must be five to eight minutes long, including the credits.

“Because of the instant or user-friendliness ng camera, it will encourage a lot of young people to get directly into the story… it lessens the technical hurdle [also]. Talagang nade-democratize ang filmmaking, and it will bring out our USBs much easier,” the National Artist said of the accessibility to smartphone cameras which may be used for filming the entries.

A total of 30 finalists will be selected, with equal representation from the National Capital Region, Luzon, Visayas, Mindanao, and Bangsamoro Autonomous Region in Muslim Mindanao.

The finalists will receive cash prizes and free access to educational events to aid in their filmmaking process. After the competition, USB winners and finalists will get the chance to attend more free training sessions and workshops to be conducted by the FDCP.

The FDCP Channel will host the USB Online Film Festival from Nov. 11 to 17 and will stream the awards ceremony on Nov. 14. Aside from the festival proper, USB will hold the FDCP Film School Basic Workshops on Filmmaking as well as the “Storming with Kidlat: Usapang Bayani Forum” wherein participants can consult with the National Artist.

For more information and to download the application form, interested parties can visit www.fdcp.ph/sariling-bayani and for inquiries, they can send an e-mail to Mark John Pamintuan at sarilingbayani.fdcp@gmail.com with the subject heading “Query: USB 2021.” — Michelle Anne P. Soliman