THE UNEMPLOYMENT RATE rose to 8.9% in September, as bad weather left nearly 900,000 without work in the farm sector and strict lockdowns claimed over 340,000 factory jobs, the Philippine Statistics Authority (PSA) reported on Thursday.

Based on the preliminary report of the September round of the labor force survey (LFS), the jobless rate increased to 8.9%, compared with the 8.1% in August. This was the highest this year, matching the revised 8.9% jobless rate in February.

This translated to 4.25 million unemployed Filipinos in September, up from 3.88 million in August. 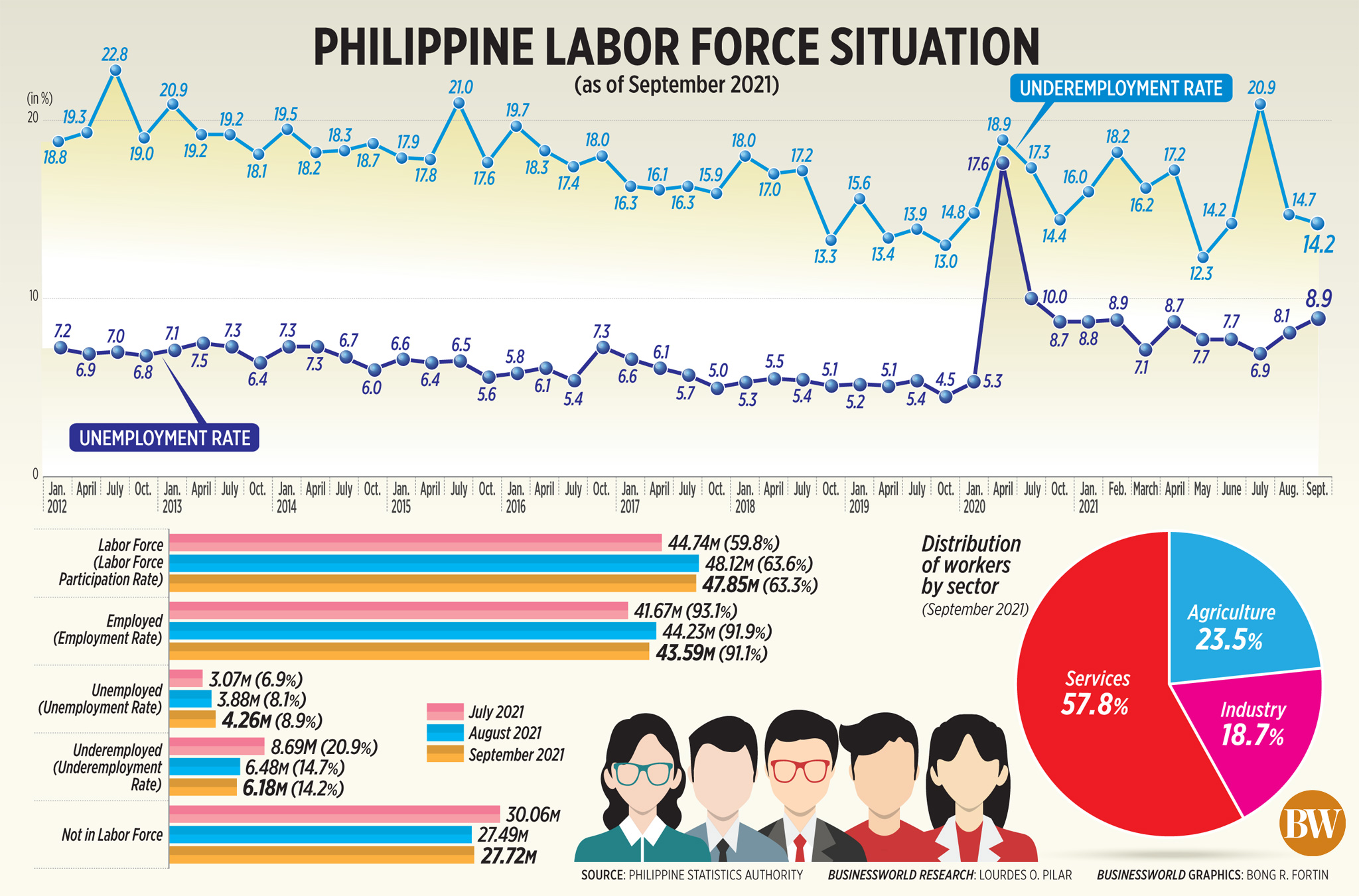 At an online press conference on Thursday, National Statistician and PSA chief Dennis S. Mapa said 862,000 jobs in agriculture and forestry were lost in September due to several storms and the end of the harvest season.

The manufacturing sector also lost 343,000 jobs, as Metro Manila remained under the second-strictest lockdown until Sept. 15.

“These results were expected as many parts of the country remained under stringent and blanket quarantines for most of the survey period,” Socioeconomic Planning Secretary Karl Kendrick T. Chua said in a statement.

“Overall, the economy has generated 1.1 million employment above the pre-pandemic level. This signals the Philippines’ continuing recovery.”

Employment rose by 414,000 in the services sector in September, thanks to wholesale and retail trade which accounted for 353,000 jobs.

Overall, the quality of jobs slightly improved as the underemployment rate went down to 14.2% in September from 14.7% in August — the second lowest this year after the 12.3% in May. This represents those in the labor force who are already working but are looking for more work or looking to work for longer hours.

The underemployment rate represented 6.18 million, down from 6.48 million in August.

The month’s labor force participation rate (LFPR) dipped to 63.3% in September, from 63.6% in August.

The size of the working-age population was approximately 47.85 million in September, slightly lower than the 48.12 million in the previous month.

OUTLOOK
Mr. Chua expressed confidence the labor market would show improvements in October, since it would reflect the full impact of the granular lockdowns in the Philippine capital.

“We look forward to the expansion of the alert level and granular lockdown system to the whole country to recover more jobs and livelihoods,” he said in a statement.

However, the lackluster labor market may have weighed on the economy’s growth in the third quarter.

Mr. Mapa said further easing of mobility curbs and a pickup in the pace of vaccinations will help drive consumption.

“However, until households are secure in their ability to access income and rebuild their savings, we may have to be content with only modest gains in consumption and in turn, overall economic growth. Where consumption goes, the Philippine economy will likely follow,” he added.

In a Viber message, Rizal Commercial Banking Corp. Chief Economist Michael L. Ricafort said the recent typhoons in October could lead to another temporary reduction in agricultural jobs until the next planting season.

Despite the higher unemployment rate, Mr. Ricafort said markets may “look beyond that and well into the Christmas holiday season and also the preparations for the May 2022 elections.”

He said there will be more job opportunities as the national elections approach as the government ramps up infrastructure spending. — B.A.D.Añago