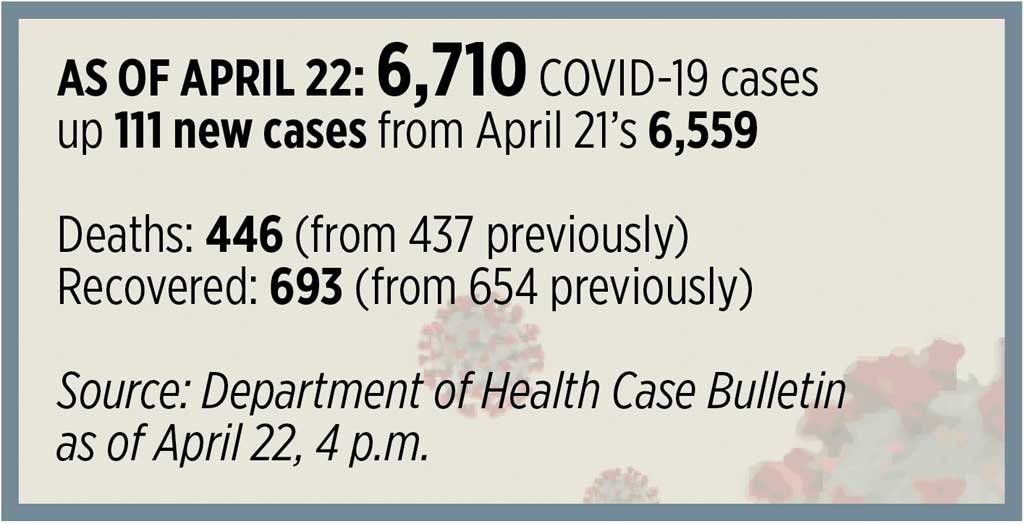 THE DEPARTMENT of Transportation (DoTr) on Wednesday said it was awaiting the decision of the Inter-Agency Task Force for the Management of Emerging Infectious Diseases (IATF-EID) to allow buses and trains to operate partially in Metro Manila. “Naumpisahan nang pag-usapan sa IATF ‘yan. Noong Lunes nagbigay ng statement ang bagong kalihim ng NEDA (National Economic and Development Authority), kung magbabalik-operation dapat hindi full capacity kundi 30% lang (The IATF has started addressing the matter. Last Monday, the new acting secretary of NEDA made a statement that the capacity should be limited to just 30%),” Transportation Secretary Arthur P. Tugade said in a briefing. The partial operability is for the continued enforcement of physical distancing protocol to avoid the spread of the coronavirus disease 2019, he added. Mr. Tugade also said they are exploring the possibility of resuming inter-island ferry operations. The Management Association of the Philippines has proposed to the DoTr that a “demand-driven” transport system be implemented in the National Capital Region to allow workers to “gradually” return to work and avoid business closures and layoffs. — Arjay L. Balinbin

PERSONS exempted from border restrictions in Cebu will be reduced, the provincial government announced on Wednesday as the number of coronavirus disease 2019 (COVID-19) patients continues to increase in the independent cities of Cebu, Lapu-Lapu, and Mandaue. The Department of Health regional office in Central Visayas, where there are now 203 cases, reported 12 new cases on April 21 with seven in Cebu City, three in Mandaue, and two in Lapu-Lapu. Cebu, the business center, has the highest total cases in the region at 173. “Since it would seem that Cebu City continues to increase its numbers in the positive cases… I find it more prudent that aside from a general classification or a general sector (that are) exempted, we will now have to go down to specifics,” Gov. Gwendolyn F. Garcia said in a meeting with government line agencies, banks, telecommunication companies, utility providers, power producers, petroleum suppliers, and money remittance centers. These sectors will be submitting their list of exempted workers, which will be assessed for reduction by the provincial government. The provincial government, with its headquarters in Cebu City, will also be trimming its skeleton workforce. Members of the diplomatic corps and consulates, which are mostly in Cebu City, will no longer be exempted. “We will have to implement even stricter controls now. That is why we will go through each and every exemption and we would need your help in identifying because the province will now issue a pass,” she said. The enhanced community quarantine measures in Cebu province are on an open-ended implementation.

THE DEPARTMENT of Agriculture-Zamboanga Peninsula’s (DA-9) diagnostic laboratory for animal diseases has been reconfigured as a testing laboratory for the coronavirus disease 2019 (COVID-19) and is now accredited by the Department of Health (DoH). “We express our support in this endeavor knowing that we have the facility and the equipment to possibly qualify to test COVID-19. Utilizing it is in our utmost agenda right now apart from ensuring the continuous food supply in the region to help in this COVID-19 crisis,” DA9 Regional Executive Director Rad Donn L. Cedeño said in a statement on Tuesday. Mr. Cedeño signed a memorandum of agreement on April 21 with DoH Regional Director Emilia P. Monicimpo for the use of the facility with management under the Zamboanga City Medical Center, a designated COVID-19 referral hospital. DoH-9 Infectious Disease Cluster Head Maryrose B. Rendon said the facility will serve not just the Zamboanga Peninsula Region but also neighboring localities, including the island provinces under the Bangsamoro Region. “We will also be accepting samples from the region’s neighboring provinces such as Basilan, Sulu and Tawi-Tawi,” Ms. Rendon said. The DA laboratory, located in Zamboanga City, was established in 2008 originally for Avian flu detection and it acquired a new RT-PCR machine in 2017. As of April 21, there were 10 confirmed COVID-19 cases in the region, with six in Zamboanga City and four in Zamboanga del Sur. — Marifi S. Jara