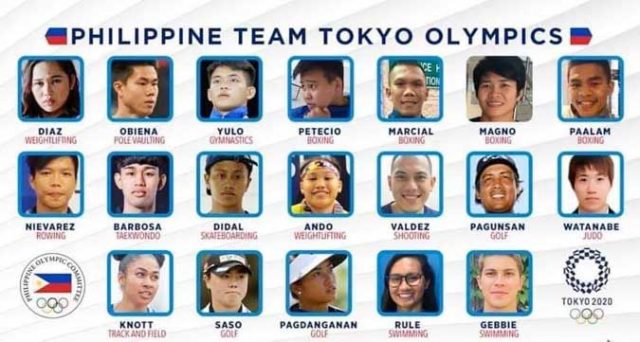 TEAM Philippines begins its Tokyo Olympics campaign on Friday and is out to give the country its first-ever gold medal in the quadrennial Games.

The contingent is bannered by 19 athletes who have gone through a lot amid the pandemic and stayed resilient to realize their Olympic dreams.

Leading the team is weightlifter Hidilyn Diaz, 30, who is making her fourth Olympic appearance after competing in the 2008, 2012 and 2016 editions.

The Rio Games silver medallist admits Tokyo is different from the previous ones she saw action in but the goal is still the same for her — bring pride and honor to the country.

Joining Ms. Diaz are first-time Olympians, who despite making their debuts have made their names on the world stage.

They are competing under the collective push of “We’ll win the gold as one,” as the Philippine Olympic Committee describes the country’s campaign.

STRONGEST DELEGATION
For Philippine Sports Commission (PSC) Chairman William Ramirez, the national squad for the Tokyo Games is the “most prepared and strongest delegation” to date for the country given the steady support the athletes have gotten from both the government and private sector for their preparation.

“I think this is the most prepared and strongest delegation to the Olympics and expectations are high,” Mr. Ramirez said.

As per data provided by the PSC, the agency has released some P2 billion since 2017 for the national team, including for international exposure and training.

The sports agency also approved the budget for the country’s campaign in the Olympics amounting to P46.2 million.

It covers the international airfare, hotel and accommodation and allowances of athletes and officials as well as the coronavirus disease 2019 (COVID-19) testing prior to departure, hotel quarantine expenses and insurance for COVID-19 treatment, travel and repatriation of the entire Philippine delegation.

Meanwhile, companies and groups like the MVP Sports Foundation, Smart Communications, Inc., PLDT and International Container Terminal Services, Inc., are among the steady supporters of the athletes in their Olympic push.

“We, too, have athletes who are capable of winning. They are up there in the rankings in their respective fields. And when you’re at that level anything can happen,” he said.

As an added motivation, medal winners stand to gain a windfall for their efforts.

The same entities and individuals combined have pledged to give P17 million for silver and P7 million for bronze.

For Ms. Diaz, the goal for them is clear, but said it is not going to be easy.

“The ultimate goal for every athlete in the Olympics is to win the gold, but it is not going to be given that easy. It’s a battle among the best of the best in the world. But we’re Filipinos, we’ll go there to fight.”

Football for Humanity continues to be resilient despite the challenges