The Presidential and local elections next week generate not only political heat and drama but also climate and energy drama from some sectors that are warning of “power outages during elections amid coal plant shutdowns.”

Blackouts during elections because of coal-plant shutdowns — this is nice scare mongering to attract public attention. This is part of the overall plan to endlessly demonize coal power plants (which contributed 57% of total power generation in the Philippines in 2020) so that the agenda of pushing intermittent renewables plus gas will be hastened.

Last Friday, April 29, I attended the media briefing of the Independent Electricity Market Operator of the Philippines (IEMOP) and among the topics discussed was the power supply-demand projection for the second and third quarters of 2022, more specifically on election week.

The market operator listed the scheduled (maintenance) shutdowns until September, and made four supply-demand projections under four assumptions. For purposes of brevity, I will show only the most pessimistic assumption or scenario: Typical monthly offers with no additional capacities, and 1,000 MW in unplanned outage. The result for next week is a comfortable margin of 2,381 MW, minus the reserve requirement 1,722 MW and still having a net margin of 659 MW (Table 1).

So there. The assumptions are tilted towards the pessimistic scenario to widen the buffer for reserves. And still there are no blackouts foreseen. The public should be wary of scare mongering to further demonize coal, invite blackout economics, and push climate and business agendas.

INTERCONNECTIONS
Related to stabilizing power supply in the country, the Philippine Independent Power Producers Association, Inc. (PIPPA) was reported in some news outlets as urging the National Grid Corp. of the Philippines (NGCP) to hasten the greater interconnection of power supply and demand areas via providing more sufficient transmission lines and assets.

PIPPA said there are 1,000+ MW of stranded capacity in Bataan and Quezon due to transmission line limitations; another 1,000+ MW of power surplus in Mindanao that cannot be exported to the Visayas and Luzon; and hundreds of MW of mostly renewables stranded capacity in Cebu, Negros, and Panay as the inter-island transmission lines are not fully operational or remain not expanded. Good reminders, PIPPA.

NUCLEAR POWER
Last Saturday, April 30, I gave a talk — “If Leni wins, or if BBM wins, how will their policies affect our lives and businesses?” — for personnel and officers of China Bank Savings (CBS). I thanked Jo Fernandez for the invitation. My presentation was mostly quantitative, which complemented the bank’s prior session on non-partisan voter education, on what to expect and do during election day itself.

While my talk was mostly about economics, I devoted two slides comparing the energy policies of Vice-President Leni Robredo, Bongbong Marcos, Jr. (BBM), and Isko Moreno. All of them are in favor of more renewables, and while Robredo and Moreno are either non-supportive of or oppose nuclear power, Marcos is explicitly supportive of developing nuclear power.

In a previous column, I noted that the BBM-Sara team is engaged in deception and dishonesty in promoting the “golden age” of Ferdinand Marcos’ Martial Law years and the “good economic management” of the current administration (see https://www.bworldonline.com/opinion/2022/03/21/437319/a-campaign-of-disinformation/, March 21). But I must give credit to BBM for supporting nuclear power development in the country.

Nuclear power has the highest energy density of all energy sources, hundreds or thousand times higher than fossil fuels coal-gas-oil, and much higher than geothermal and hydro, more so intermittent renewables solar-wind.

I showed a table on comparative nuclear power generation in my talk at CBS. I expanded it here in Table 2 to show their share to total generation. France, Belgium, Sweden, and Taiwan were the most nuclear-intensive users in the 1980s. France was 77% reliant on nuclear power in 2000 and 67% in 2020. France is the biggest electricity exporter in the European Union and seems to have no recorded nuclear accident, which is the main concern of many anti-nuke groups. 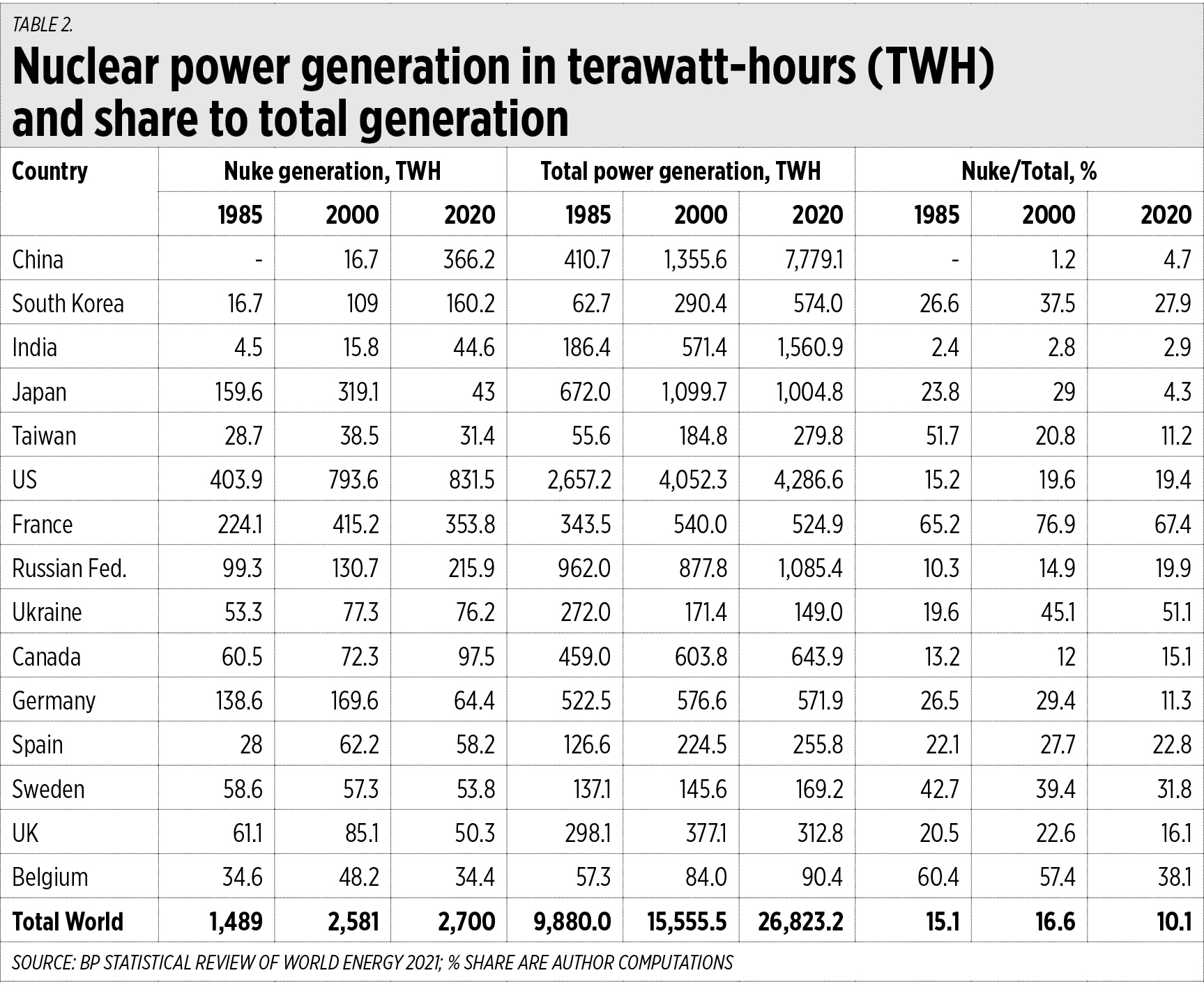 The next administration should seriously consider developing nuclear power, at least small modular reactors (SMRs) that can be put up and dispatched in big island-provinces like Bohol, Mindoro, Masbate, and Palawan.

And back to coal. The United Kingdom and Germany were 60% coal power-reliant until 1985. By 2020, it was down to 24% in Germany and only 2% in the UK. Big and poor countries China and India reach up to 78% coal use and this is one of the major contributors to their having lifted hundreds of millions of their people from poverty — by having cheap, stable, dispatchable energy for businesses and households. 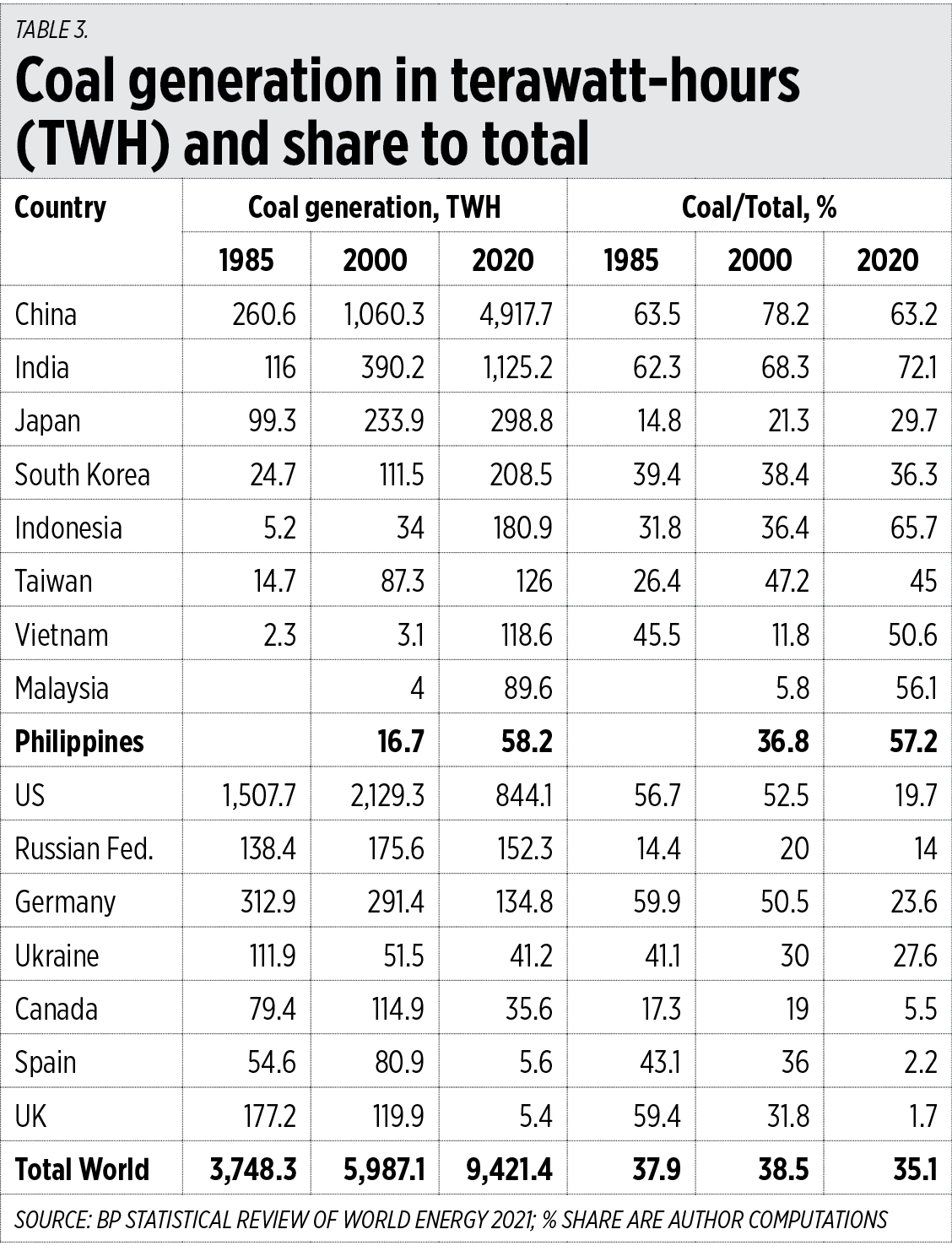 There is no “man-made” climate crisis that necessitates demonizing and abandoning fossil fuels. There is only natural or “nature-made” climate change, a warming-cooling cycle that characterized our planet’s climate since 4.6 billion years ago. Thus, the government should not distort our power supply-demand dynamics via more politics and energy rationing. Government should not impose more carbon taxes or oil taxes. We should have cheap, competitively priced, stable, and dispatchable on-demand energy.