Most power generation companies (gencos) — those that own big power plants and ensure we have 24/7 electricity except when there are major technical problems or natural calamities — also suffered major declines in revenues and net income in 2020’s lockdown and pandemic.

TOP ENERGY COMPANIES
I checked the BusinessWorld Top 1,000 Corporations report, and saw that the biggest energy companies in the Philippines are Manila Electric Co. (Meralco) with P266 billion gross revenue in 2020 (ranked #1 in the Top 1,000), followed by the National Grid Corp. of the Philippines (NGCP) with P49.25B (ranked #36). But for this piece, I focus on gencos. I will tackle the distribution utilities (DUs) like Meralco, retail electricity suppliers, and NGCP in a future column.

The biggest gencos in the country are owned by San Miguel Corp. (SMC), followed by the Lopez Group/First Gen, then the Aboitiz Group. Some companies here did not have data for 2019 so I just extrapolated the numbers from the percent change in the 2020 data.

One notable trend is the big net income in 2020 of two SMC companies despite a decline in gross revenues and the COVID-19 lockdown. The same for two First Gen companies. The Ayala power company saw a big net income in 2020. These may be windfall income from high and expensive feed-in tariff (FIT) as these two conglomerates have big wind farms that are FIT-recipients. 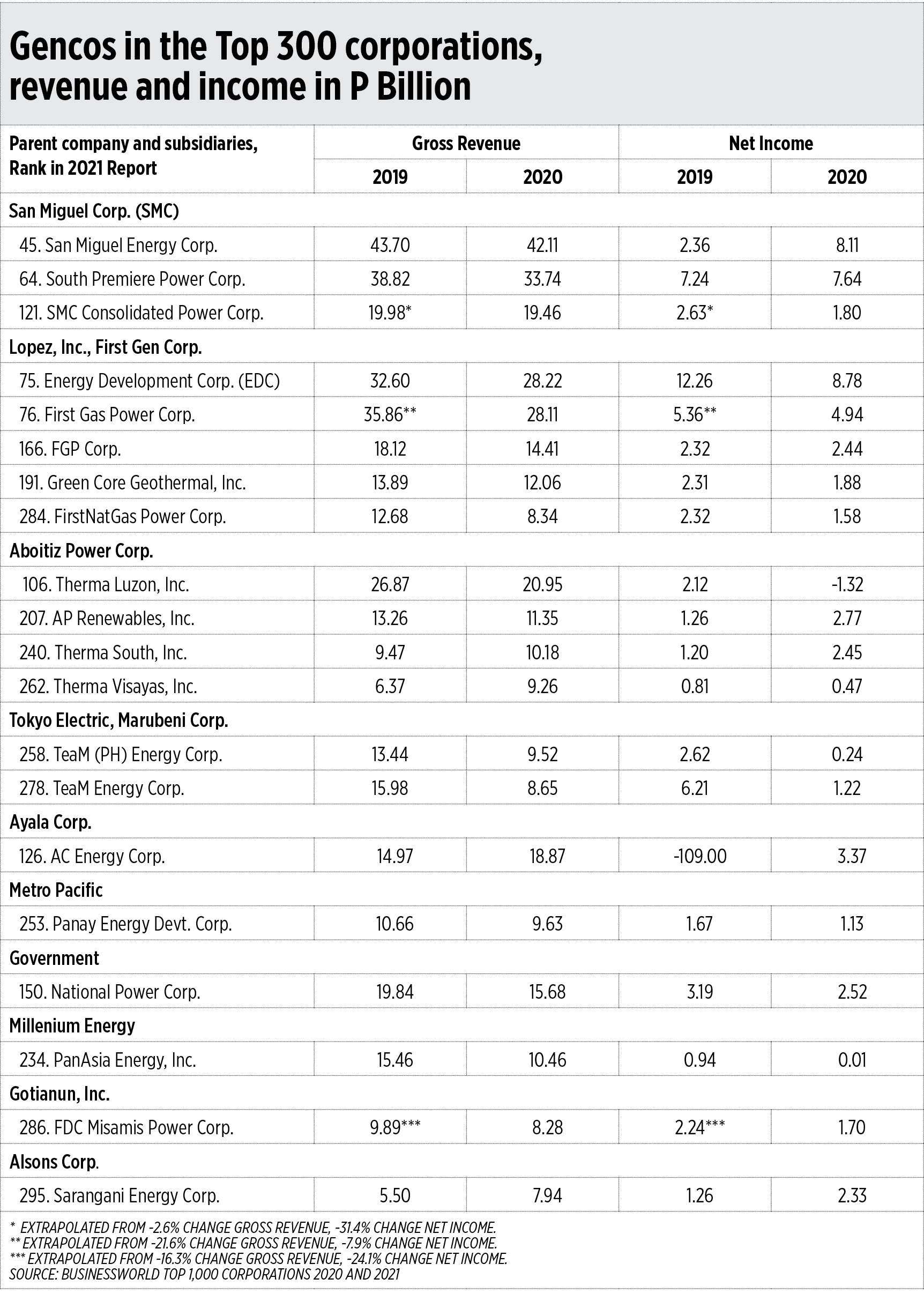 3. “ERC assures power will be sufficient during election” (Jan. 23),

All these reports except #4 are related. In his Opinion piece, Romy observed that, “Indonesia supplies over 95% of the Philippine’s coal imports. Coal-based plants, which comprise 44% of the power sector’s dependable capacity in 2020 and close to 60% of power generation, rely mainly on Indonesian coal… the closest alternative, Australian coal, costs more because of the higher quality, and is not even a perfect substitute, i.e., the plants were not designed to run on it.”

Partly because of this, scenarios of yellow-red alerts during the May election and vote validations are being considered, and this will have some political implications.

This column showed that Indonesia still has a high coal Reserves/Production (R/P) ratio in 2020 of 62 years, meaning that if we assume its coal production (domestic use + exports) will continue yearly, the estimated coal reserves will run out or be depleted in 62 years. For other countries, the coal R/P ratio in 2020 are: Vietnam, 69 years; India, 145 years; Australia, 315 years; and the US, 514 years. See https://www.bworldonline.com/europes-blackout-economics-and-the-philippines-path-to-brownouts/ (Dec. 27, 2021).

VISAYAS BLACKOUT DUE TO TYPHOON AND MERALCO SUPPORT
Report number 4 is related to Typhoon Rai (local name: Odette) which on Dec. 16 last year hit northern Mindanao and many Visayan islands and provinces — southern Leyte, Bohol, Cebu, Negros, even southern Iloilo. The Wholesale Electricity Spot Market (WESM) in the Visayas was suspended for one month due to power oversupply as demand was curtailed by knocked out distribution posts and cables.

While there is an oversupply of power in Cebu, Bohol is power deficit because it relies mainly on geothermal power “imported” from Leyte plus its own diesel gensets run by NPC. Bohol should have its own coal plants like its neighbor Cebu to be more self-reliant in power generation.

PCCI ENERGY POSITION, RECENT ELECTION
Report #5 quotes new Philippine Chamber of Commerce and Industry (PCCI) President George Barcelon as saying that PCCI highlights the need for more transmission lines and the upgrading of existing facilities, adding that “While variable renewable energy resources could be rapidly deployed in certain areas, coal is still critical to fuel the country’s economy because it is the most stable source of energy.” Good observation.

On another note, my friend and fellow BusinessWorld columnist Andrew Masigan, in his Philippine Star column, wrote a scathing attack on the PCCI election held on Dec. 3 where Mr. Barcelon was elected as the organization’s new President for 2022-2023. He wrote, “It’s a shame that such an embarrassing row has besmirched the reputation of the prestigious PCCI. It just proves that the organization needs new blood to re-institute professionalism and greater participation among members.” (“Dirty politics mars the PCCI,” Andrew J. Masigan, Philippine Star, Jan. 19).

I understand the need to have young blood in the PCCI leadership, but whatever reforms in the election procedures and other rules should have been discussed, agreed on, and instituted early in the two-year term (2020-2021) of the past President and not rushed at the last few months of his term. So the result of the election should be respected. When proposed late reforms like banning a past President from running again for the same position are not agreed on early on, then the ban should not apply.

PCCI is the biggest business organization in the country. Its leadership position on energy realism and not alarmism is important because its advise to the government has strong weight and value.