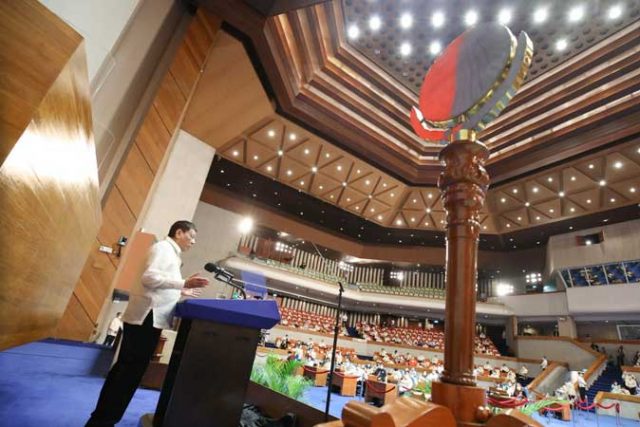 President Rodrigo Duterte has delivered his last State of the Nation Address (SONA). Lasting for almost three hours, the national chief executive presented his administration’s accomplishments and his calibrated prognosis of the current state of the country, its economy, and its people.

He discussed the administration’s performance for the past five years that expectedly legitimizes its actions and policies. The speech interspersed issues and achievements covering: free tertiary education, the universal healthcare, the war against illegal drugs and criminality, the Marawi victory, the Organic Law for the Bangsamoro Autonomous Region in Muslim Mindanao, infrastructure achievements and digital connectivity, ease of doing business, freedom of information, anti-corruption, rice tariffication, the welfare of the OFWs, the Balangiga Bells, and maritime commons in the West Philippine Sea.

The president also highlighted populist acts such as tax reforms, the importance of MSMEs, the Malasakit Centers, the social amelioration program, Bayanihan I and II, and the health system. He also underlined the importance of vaccination as the most effective solution to the pandemic crisis.

Also noteworthy is the presidential recognition of the crucial role of the private sector and LGUs in the COVID-19 response, tracing, treatment, and vaccination roll-out.

Before ending his address, the President expressed the legislative priorities for his final year, which included the creation of the following: the unified system of separation, retirement, and pension for the military and uniformed personnel; a national economic recovery task force; an OFW center; a center for disease prevention and virology; and a center for disaster resilience. Further, he also asked Congress to pass the E-Governance Act, a law to provide free legal assistance to enlisted personnel, and the amendments to the Foreign Service Act, Public Service Act, and amendments to the Retail Trade Liberalization Act of 2000.

Another key aspect in the address pertains to foreign policy. While maintaining his stand for an “independent” policy, the President emphasized the need to “work with all nations” and “seek partnerships that work.” He also expressed gratitude to the ASEAN for supporting his government and stated that “the Philippines will continue to be a responsible member of the international community.”

Though skeptical about the worthiness of the Arbitral Ruling of 2016 about the dispute in the West Philippine Sea (WPS), he stated that “the Arbitral Ruling is now part of international law.” But the source of his contention or dilemma is rooted on the implementation or realization of this ruling.

This last SONA of President Duterte can simply be analyzed using a two-dimensional lens — what was discussed and what was not discussed. This probing technique directly exposes the gap or shortcomings and even the failures in terms of government performance for the entirety of its term.

Nonetheless, the SONA was quite disconnected from the economic hardships that the Filipinos are experiencing on the ground.

Based on the recent face-to-face interviews, Pulse Asia’s June 2021 Ulat ng Bayan national survey revealed that the 2021 SONA acquired an awareness rating of 69% only, comparably lower than the 2019 survey of 75%, and even much lower than 2018, which was 83%.

As for the people’s expectation, the “Most liked issue to be discussed by President Duterte in his coming SONA” according to the respondents pertain primarily to three gut issues, i.e., “creation of jobs or livelihood” (38%), “improving the national economy” (35%), and “controlling inflation” (33%). This is followed by: “plans to expedite COVID 19 vaccination” (31%), “increasing pay of workers” (26%), and “improving educational system” (26%).

Across economic classes, “the creation of jobs or livelihoods” is the astounding priority, registering at 49% for ABC, 37% for D, and 35% for those belonging to class E.

By and large, the survey implies the breadth and depth of issues that the administration should be responsive to and accountable for — recovery of jobs and livelihoods and to alleviate the economic hardships that the whole nation has to suffer and endure.

To a certain extent, the President delved into the pressing issues and concerns of the population. However, his long ramblings about the drug war, the communist insurgency, and the two water concessionaires could have been more constructive if he gave the people more clarity on his administration’s direction towards economic rebound. He should have allotted more time to comprehensively discuss strategic policies for post-pandemic recovery.

Glazed with emotional expression, his immutable narratives on the drug problem and the West Philippine Sea issue persisted. The human rights controversy over his war on illegal drugs was insistently rationalized by his illustration of the murdered civilians and law enforcement officers by the hands of drug-driven criminals. His narrative on the West Philippine Sea started positively with a few lines asserting the arbitral decision and the rule of international law but was negated by his defeatist narrative and one-dimensional view of the futility of going to war with China. He deliberately ignored the emerging inter-continental alliance to stand up against Beijing’s destabilizing aggression and settled on maintaining the status quo of defeatist appeasement.

In its entirety, the SONA simply revolved around the President’s remaining political agenda. While we should all agree with his last call, that is, “Together, let us rise as a nation,” the cornerstone of rising up from this pandemic should have been laid down throughout his address. Rising up as a nation entails inclusive and responsive governance anchored on an all-sector participation led by the inspiring and unifying spirit of an enlightened leadership. Something we were hoping for.

Victor Andres “Dindo” C. Manhit is the President of the Stratbase ADR Institute.

PBA crafts protocols as it looks to squeeze in some activities