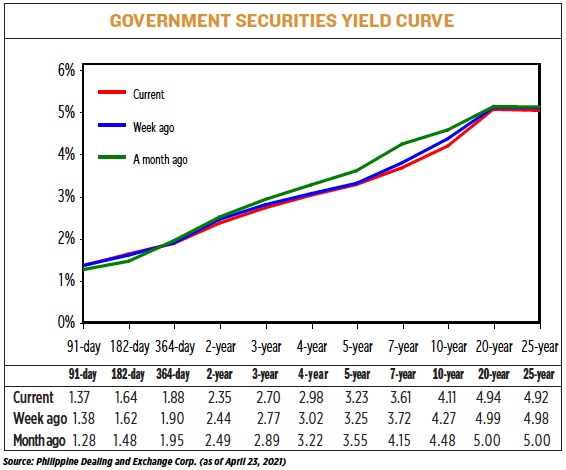 GS yields, which move opposite to prices, went down by an average of 5.46 basis points (bps) week on week, based on the PHP Bloomberg Valuation Service Reference Rates as of April 23 published on the Philippine Dealing System’s website.

“Strong market liquidity continued to take center stage, with GS benefitting from it given the dearth of investment outlets amid the current risk aversion,” he said.

“However, lack of further catalyst led to profit taking and as the market assesses BTr’s borrowing plan in the coming months,” the trader said.

The Treasury borrowed P35 billion as planned via its offering of fresh seven-year T-bonds on Tuesday. The papers fetched a coupon rate of 3.625%.

Investors swamped the auction, with tenders reaching P90.386 billion, prompting the BTr to open the tap facility to raise another P25 billion as it took advantage of the low rate quoted for the tenor.

Meanwhile, the government will report first- quarter gross domestic product (GDP) data on May 11. Strict lockdowns implemented to contain the spread of the coronavirus caused the Philippine economy to shrink by 9.6% last year, the steepest fall since the 1940s.

Both analysts expect yield movements this week to be influenced by the Bangko Sentral ng Pilipinas’ April inflation forecast and the Treasury’s May borrowing schedule.

“These are awaited leads and are expected to provide guidance on the direction of the yield curve. Until then, yields may continue to consolidate,” Mr. Palma said.

“Yields will continue to trade sideways as we wait for CPI (consumer price index), BTr’s May borrowing schedule and updated quarantine status for the month of May,” the bond trader said.

The government is looking to borrow P3 trillion this year from local and foreign sources to help plug a budget deficit seen to hit 8.9% of GDP. — Lourdes O. Pilar

Yields on gov’t debt drop on steady May inflation

Yields on gov’t debt go up