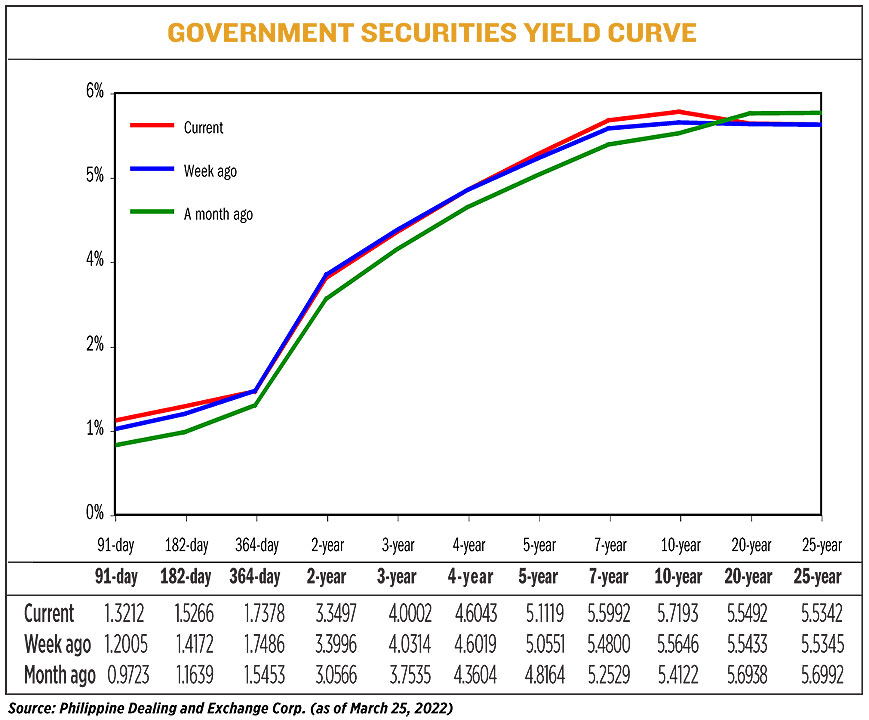 Bond yields, which move opposite to prices, rose by 4.34 basis points (bps) on average week on week, based on PHP Bloomberg Valuation Service Reference Rates as of March 25 published on the Philippine Dealing System’s website.

A bond trader noted that yields on tenors of four years and longer went up following the hawkish turn of the Fed, the auction result for the seven-year papers, and the BSP’s higher inflation forecast this year.

“However, further upward move (of yields) on that space on prospect of less supply of belly to long end next month and BSP keeping its policy rate at record low,” the bond trader said in a Viber message.

On Tuesday, the Bureau of the Treasury (BTr) raised P15.69 billion through the reissued seven-year T-bonds which was less than half the programmed P35 billion. The offering, though, attracted P40.59 billion in bids.

These debt papers, with a remaining period of six years and four months, were awarded at an average rate of 5.601%, higher by 91.2 bps from its last offering on Jan.  25.

FAMI added that there was a good demand after the auction.

After starting its tightening cycle in mid-March that saw its near-zero policy rates hiked by 25 bps, Mr. Powell said the US central bank must move “expeditiously” to arrest four-decade high inflation, and signaled a possibility of a 50-bp rate hike as soon as its May 3-4 meeting.

On the local front, the BSP maintained its key rates for the 11th consecutive meeting last week despite climbing inflation expectations as global oil prices continued to rise due to ongoing Russia’s invasion of Ukraine.

The central bank also said that average inflation could breach the 2-4% target range this year at 4.3%, higher than the previous forecast of 3.7% while average inflation is expected to decline and settle at 3.6% in 2023.

For this week, the bond trader expects yields to move sideways with an upward bias amid inflation pressures, especially as the traders expect domestic oil price hikes to resume this week.

“We also look forward to the BTr April borrowing mix to be released mid-week,” the bond trader added.

FAMI also said investors will remain wary of higher inflation in the coming months and the possibility of a hike by the BSP soon.

“The exacerbation over Russia-Ukraine tension will continue to weigh on sentiment and will keep investors from adding risk positions. Yields are still biased to move higher given upcoming 10-year bond auction [this] week and release of BTr’s borrowing plan for April,” FAMI added.

On Tuesday, the Treasury will offer P35 billion in reissued 10-year papers with remaining life of nine years and nine months. — with Reuters

D.M. Wenceslao to spend P12B on Aseana City over next 5 years