NATIONWIDE BULK PRICES of general goods rose to their highest level in more than a decade in February due to higher fuel costs caused by the Russia-Ukraine war, latest preliminary data from the Philippine Statistics Authority (PSA) showed.

This was the highest index reading in more than 10 years or since the 5.8% growth recorded in December 2011. 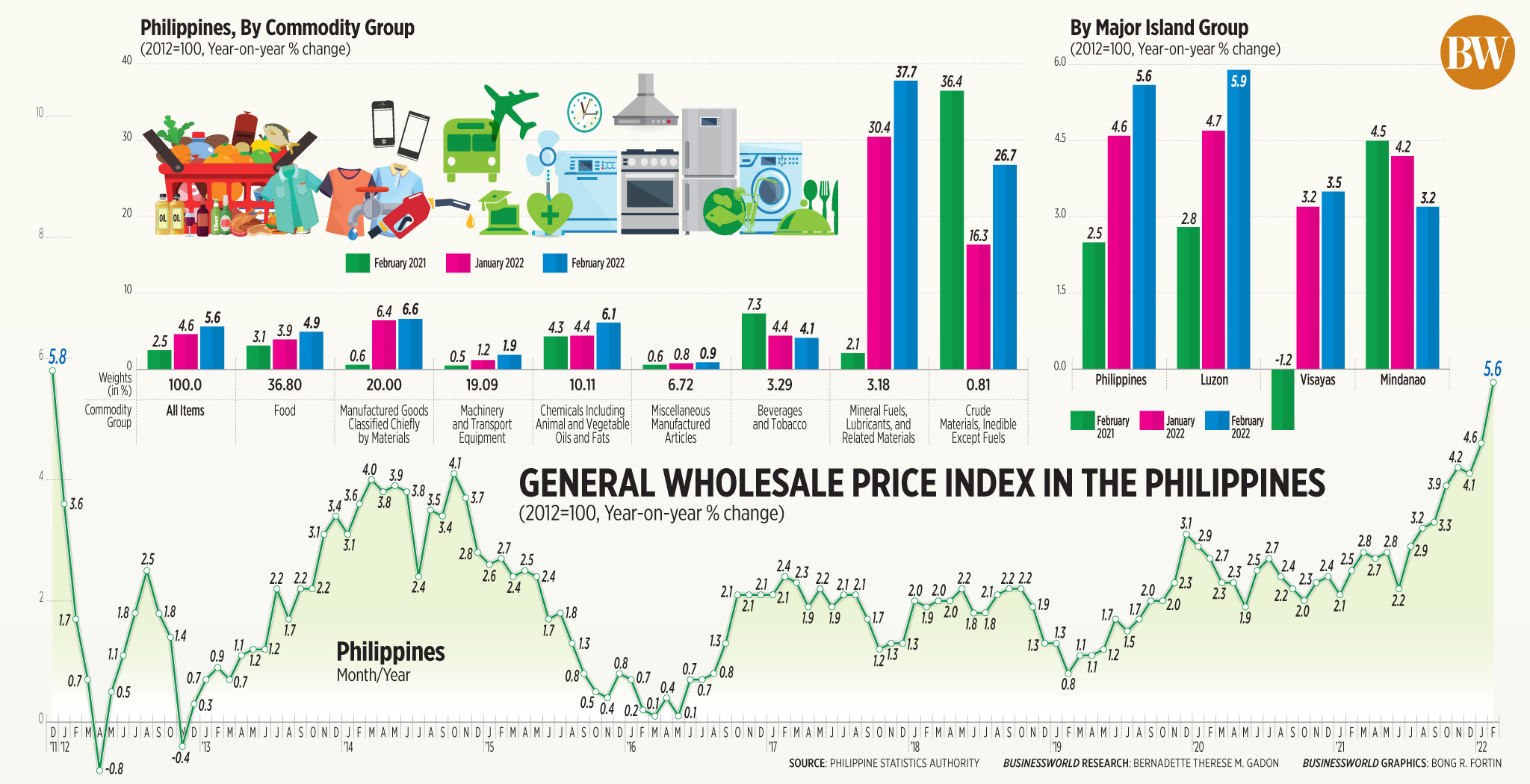 The GWPI is used to monitor the wholesale trade sector and serves as a basis for price adjustments in business contracts and projects.

University of Asia and the Pacific Senior Economist Cid L. Terosa said the surge in bulk prices in February was mainly due to the spike in global oil prices after Russia invaded Ukraine.

“Higher global fuel and commodity prices due to the Russia-Ukraine conflict pushed prices higher. In addition, prices of housing, electricity, and water added upward pressure on prices in February,” he said in an e-mail interview.

Global crude oil prices soared above the $100-per-barrel mark after Russia began its invasion of Ukraine on Feb. 24. Concerns over global supply contributed to the volatility in oil prices since Russia is the world’s second-largest producer of crude oil.

Nearly all eight commodity groups monitored by the agency posted growth on an annual basis in February. Only beverages and tobacco saw slower growth at 4.1% from 7.3% in February 2021, and eased from 4.4% in January.

The heavily weighted food index, which contributed 36.8% in the theoretical wholesale basket of goods, went up by 4.9% year on year in February from 3.9% the previous month.

Manufactured goods classified chiefly by materials likewise increased by 6.6% in February from 6.4% the previous month. This group accounted for a fifth of the wholesale market basket under 2012 prices.

Mineral fuels, lubricants, and related materials surged by 37.7% in February, higher than 30.4% the previous month and 2.1% in February last year. This commodity group accounted for 3.2% of the market basket.

Crude materials, inedible except fuels, which made up 0.8% of the wholesale basket, also jumped by 26.7% from 16.3% in January.

Luzon had the quickest growth in over a decade or since the 6.6% print in December 2011.

The GWPI in the Visayas also inched up to 3.5% from January’s 3.2%. It was a turnaround from the 1.2% contraction recorded in February last year. This matched the print logged in October 2011 and was also the quickest pace in more than 10 years or since the 4.2% growth in September 2011.

For the year, Mr. Terosa expects bulk prices to continue to climb based on the continued rise in commodity prices here and abroad.

“The GWPI will continue to climb in March and even in April, the confluence of global (persistence of the Russia-Ukraine war and the continued rise of global food and commodity prices) and domestic events (domestic transmission of increases in global food and commodity prices as well as brisk election-related activities) will keep prices above levels achieved last year and last February 2022,” Mr. Terosa said.