The bad energy supply situation in Europe, China, and India has worsened as evidenced by continued rise in prices of key energy commodities. This column discussed this topic three weeks ago.*

HUGE SPIKE IN GAS AND COAL PRICES
Over the last three weeks, the price of coal has nearly doubled while EU gas and UK gas prices are three to four times higher than end-2020 levels. The year to date (YTD) or from end-2020 to Sept. 24 then Oct. 15, 2021 percentage increase in prices are shown in Table 1. 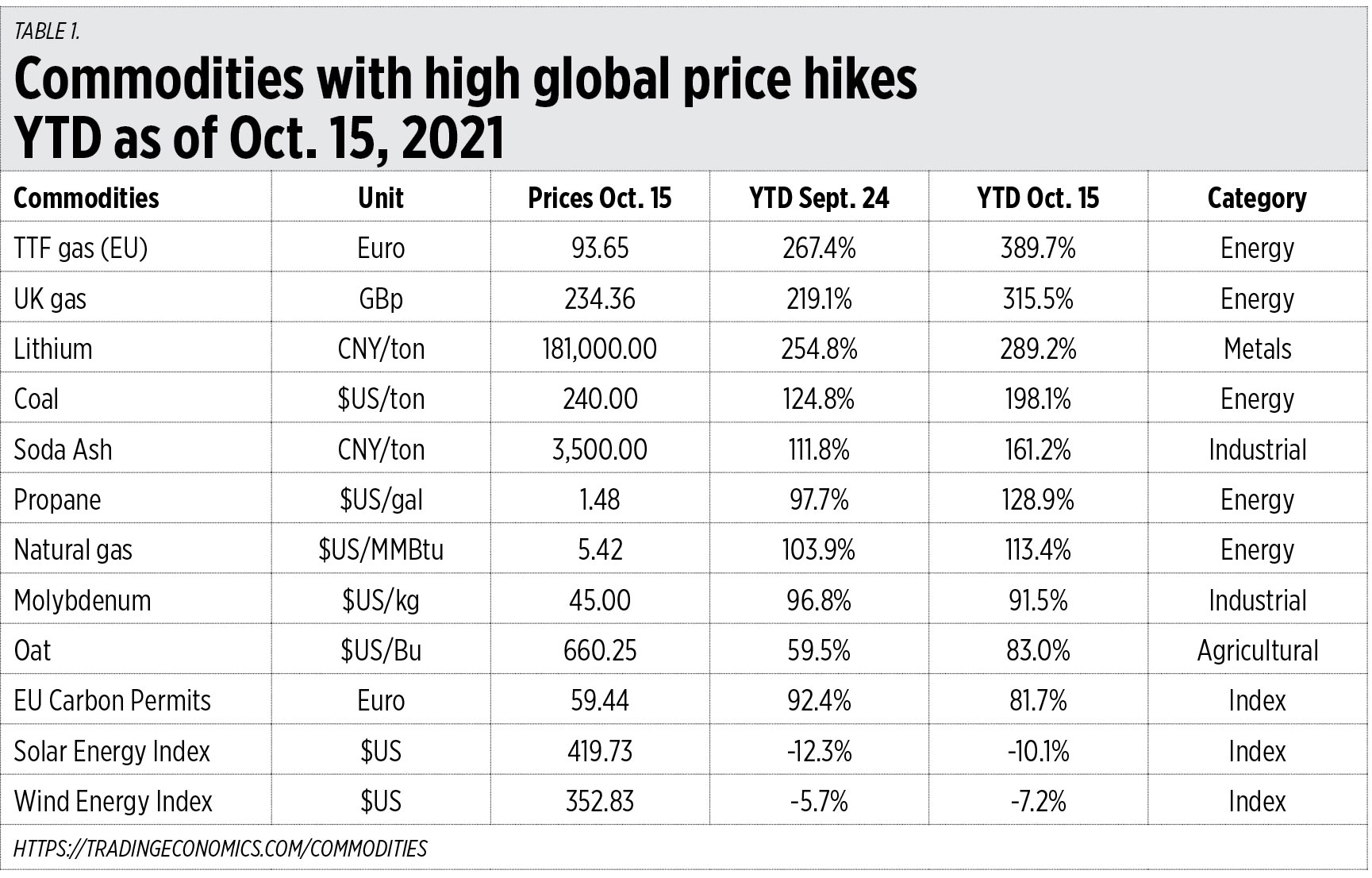 Now more businesses recognize that solar-wind are non-reliable sources as shown by their continued index price contraction. And the EU carbon permits index continued to slide. The non-distortionary price of carbon permit or carbon tax should be zero.

COP26 AND CLIMATE SPENDING
The UN Climate Change Conference known as COP26 will be held from Oct. 31 to Nov. 12 in Glasgow, UK. “The Conversation” has estimated that about 25,000 people from around the world are expected to attend. They will burn lots of fossil fuels in this global travel to demand “net zero” reduction if not the death of fossil fuels for the rest of humanity who are not privileged like them.

While waiting for a portion of that $100 billion a year of climate money from rich countries as agreed upon in COP20 in Paris in 2015, the Philippine government has been doing big climate spending on its own, P184 billion in 2020 and P284 billion in 2022. Many departments and agencies jumped into the climate issue because there is huge funding allocation (see Table 2). 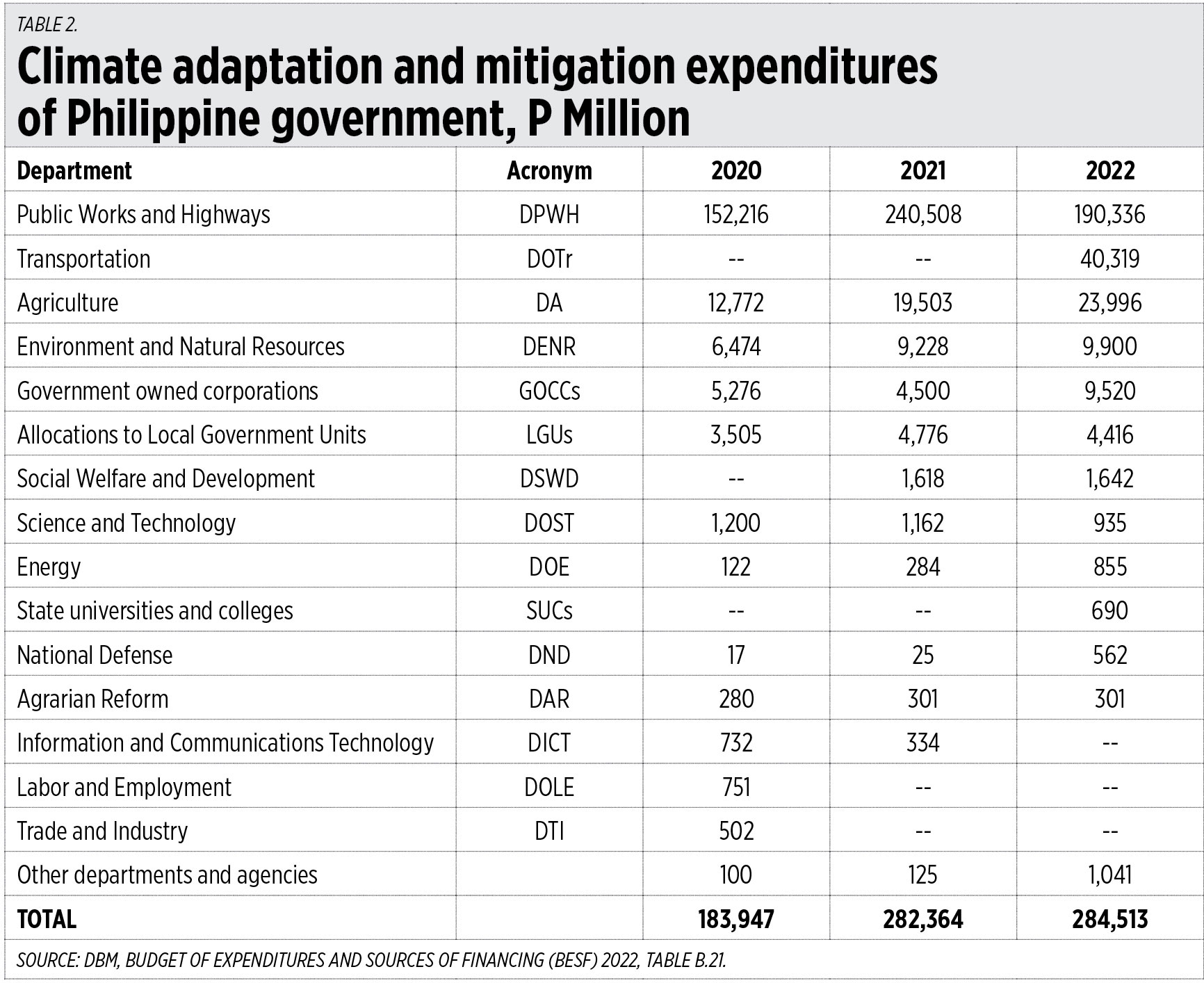 Excluded here are climate spending of many LGUs as they have other sources of revenues aside from the transfers they get from the National Government. Also excluded here is the budget of the Climate Change Commission (CCC) with P118.7 million in 2020, P150.5 million in 2021, and a proposed P145.4 million in 2022.

Hundreds of billions of pesos yearly to fight less rain and more rain, less flood and more flood, less cold and more cold. Whatever the weather and climate, they say it is a scary “climate crisis” and just spend-spend-spend then tax-tax-tax the public.

NGCP AND TRANSMISSION ISSUES
These recent reports in BusinessWorld caught my attention:

Report number 1 is due to higher transmission charge, higher ancillary service (AS) charges by the National Grid Corp. of the Philippines (NGCP). AS are needed most if the grid has plenty of intermittent, unstable, and weather-dependent sources like wind-solar, also ageing conventional sources like old coal, geothermal, and hydro plants.

And this belies the claim by NGOs in report No. 3. They hide the inconvenient truth that wind-solar are intermittent and will require AS 24/7. That solar is out every night, 365 nights a year, and even at day time when it is very cloudy and rainy. Wind is also out when the wind does not blow. This is what happened in Europe since around July this year — they had calm weather, the wind hardly blew, and they have so many wind farms, and the grid was edging towards blackout so they scampered for more gas and coal, even at high, prices to prevent actual blackouts.

Reports No. 2 and 3 are related to climate spending discussed above. And the ADB is bitten by the same NGOs it has accredited as partners because these NGOs will not be satisfied with $31 billion or $100 billion of climate-related lending.

Finally, a good opinion column by Barok Biraogo, “The NGCP controversy should be an election issue” in Manila Standard on Oct. 8. He noted that the only national monopoly in the country “the NGCP made hostages of both the Philippine government and the Filipino people by declaring that there will be no hikes in electricity bills if the NGCP is allowed to violate its franchise and to ignore the EPIRA… the Communist Party of China, which controls the NGCP… has been hiring Chinese nationals for its management posts. This is a violation of the constitutional provisions on alien involvement in public utilities, as well as the Anti-Dummy Law. In short, Congress has valid reasons to cancel the NGCP franchise.”

Capitalism and freedom in Asia