Home Editors' Picks Migration and financial stability: A model on how to get there

In the past weeks, I have attempted to explain and revisit the research on why the poor are poor, why they end up forced to migrate, and the most perplexing of it all: why are they remaining poor despite migrating? I highlighted how the poor often suffer a triple whammy: low incomes, volatility of these incomes, and lack of access to financial products and how migration can address these. Remittances multiply the amount of the income, are largely stable, and can act as proxy financial products like insurance, an education fund, or a housing loan. To answer why they remain poor despite migrating is a bigger question, especially since we have some findings already that the poor are excellent money managers and constantly save.

To answer this question, I interviewed 15 OFWs living in Paris between November 2015 until December 2016 which supplemented my work as an adjunct professor of the Ateneo School of Government where I was teaching financial literacy to OFWs to students whom I also administered surveys. I was also an active participant in the Filipino community: I attended church group meetings, park get-togethers, and family gatherings wherein I had a clear glimpse of the lives of the Filipinos in Paris.

As my interviews progressed, I began to see patterns in responses and interesting questions that led me to a theoretical model. I uncovered two stages in Migrant Finance, namely Stage 1: Achieving Independence, and, Stage 2: Achieving Stability — and nuanced the precipitating conditions, aspects, mechanisms, facilitators, and resulting conditions. Figure 1 illustrates my model. We will get to the Stages in later columns but today I would like to explain the precipitating conditions to Migration: Home Bias and Social Indebtedness. 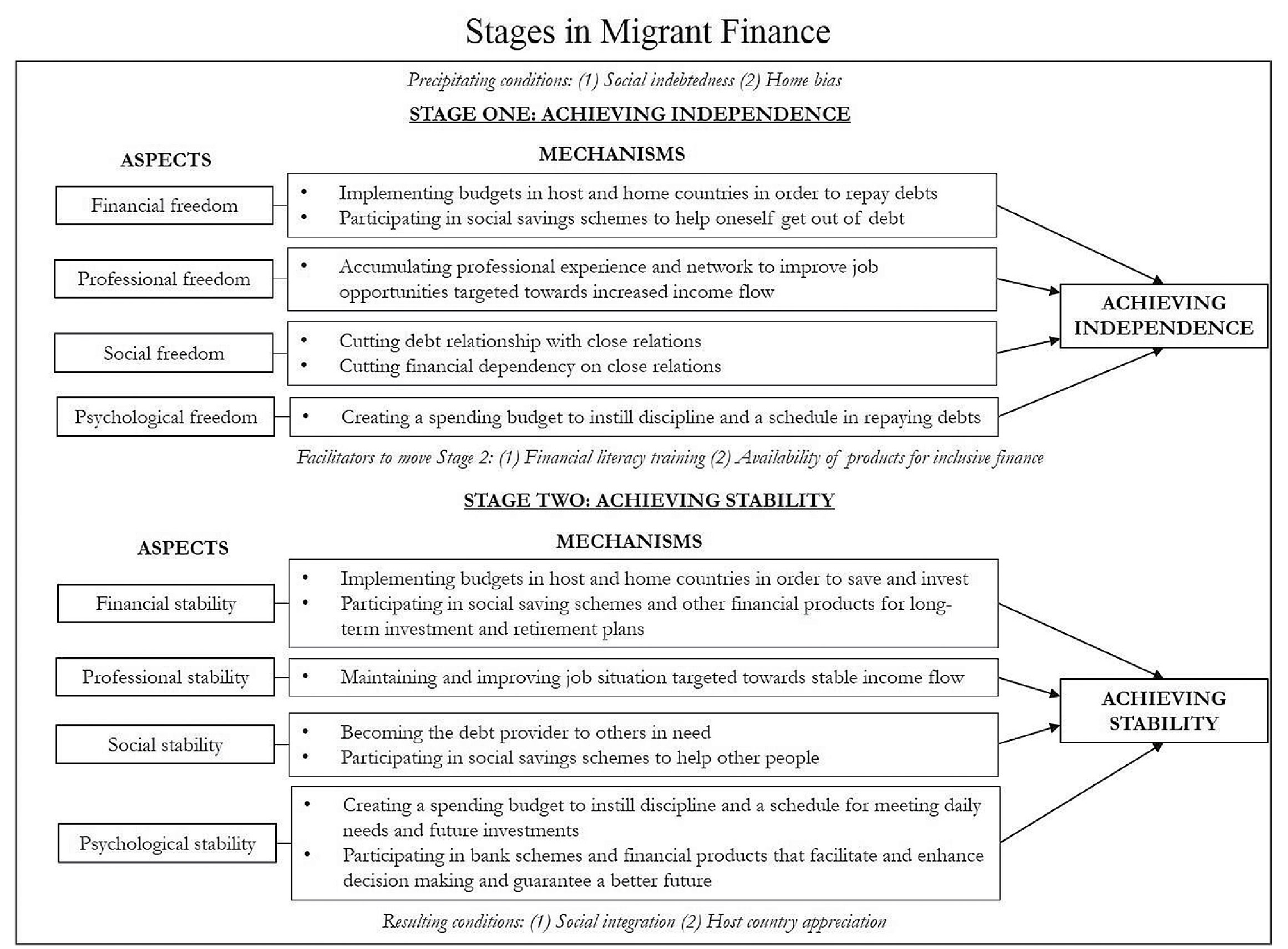 THE GRASS IS ALWAYS GREENER AT HOME
It is easy to believe that migrants have always dreamt of living abroad and that this is generally considered a success, especially for poorer families. I learned very quickly that this is a big misconception. Very few OFWs actually had the “European dream” or had known earlier on that they were going to go abroad. Instead, most went abroad simply because an opportunity arose and because doing so made sense given the overall situation of their lives. Going abroad meant making sacrifices, most importantly, the sacrifice of being far away from loved ones. But this sacrifice comes with the reward of being able to financially provide and improve the lives of these same loved ones. One of the most interesting things I uncovered was that most of them were not only simply happy where they were but also did not dream of a luxurious life but rather of a comfortable life having “just enough.”

“For me, you know, because I wasn’t born that my life was prosperous, do you know what I always pray for? That even if we have just enough, you know, if so blessed, if there could hopefully be a way where we could all be together again with my children, that they could study, that no one would get sick. That’s already fine with me.” (Eduard)

Filipinos have a love for home that was evident in the interviews. Forty-four percent of survey respondents said that they had planned to come home within five to10 years and 41% had planned to come home within one to five years. It is important to understand that migration was primarily a strategy to be able to eventually go home to a better, more stable, and more comfortable life. Further, most migrants did not want their children to have to go through the same thing they did and thus initially planned to keep their children in the Philippines to benefit from remittances until they themselves could return. Many interviewees felt that apart from their financial situations, their personal lives were generally happy. Thus, if they could have found this comfort at home, they would not have opted to migrate. As (Evelyn) points out, “Yes, it was really just an opportunity. That’s it. It was not in my dreams.”

THE INDEBTED ROAD TO MIGRATION
A second commonality of migrants was that they were laden with debt at the onset. The amount of this is staggering. The typical costs of travel — transportation, visa costs, passport fees, and the like are not the fees we are talking about here. Rather, the fees to migrate for a poor household are linked to the fact that the person in question needs to illustrate financial capacity to migrate. Meaning: a poor household can never get a working visa or tourist visa because they would not have the financial capacity to travel and would therefore not be eligible. They thus need to go through the agents who find loopholes in the system and recreate a situation for them on paper that would allow them to present themselves as financially capable. Such services range from opening a bank account with “show money,” registering a dummy enterprise, finding a sponsor abroad to fabricate a close relationship to the migrant, or creating and implementing a travel itinerary to nearby countries in order to accumulate passport stamps. These agency fees can range from P200,000 to P600,000! To pay these exorbitant fees, the migrant gathers all possible sources of funding — from relatives, friends, loan sharks, and the agents themselves. They then spend the first few years of their lives abroad repaying this. Still, instead of feeling cheated, they considered this debt as investment capital. Being indebted was necessary for success. It was the way in which they become motivated to step out of their comfort zones and do the seemingly impossible.

“And my debts, I remembered them. (I thought) ‘Everything I spent for this — how will I be able to pay that in the Philippines, when our (money) is just so much.’ So I said: ‘I need to have guts’.” (Joy)

Unlike a financially stable household, a migrant’s debt is not that of a loan from a bank but is often provided by relatives or close friends, which ends in utang na loob. I found that instead of this being comforting, this to them was the equivalent to being imprisoned — not just financially but, more importantly, professionally, socially, and psychologically. They thus engage in specific mechanisms to free themselves in these four aspects, which comprise the first stage of Migrant Finance: Achieving Independence.

Daniela “Danie” Luz Laurel is a business journalist and anchor-producer of BusinessWorld Live on One News, formerly Bloomberg TV Philippines. Prior to this, she was a permanent professor of Finance at IÉSEG School of Management in Paris and maintains teaching affiliations at IÉSEG and the Ateneo School of Government. She has also worked as an investment banker in The Netherlands. Ms. Laurel holds a Ph.D. in Management Engineering with concentrations in Finance and Accounting from the Politecnico di Milano in Italy and an MBA from the Universidad Carlos III de Madrid.

The Western European microfinance movement: An evolution of purpose

Doing good while doing well: Fact, fiction, or an aspiration?