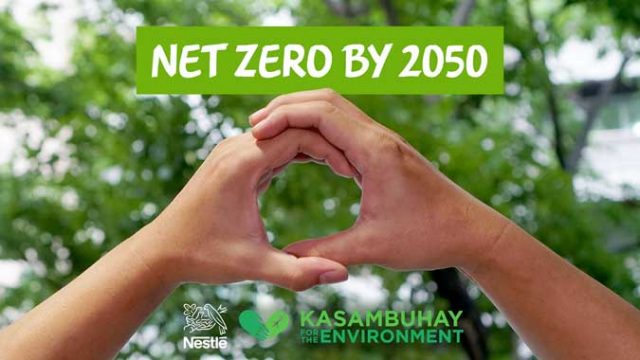 NESTLÉ PHILIPPINES, Inc. on Friday made new commitments to achieve net zero emissions not later than 2050, including reducing virgin plastics consumption by a third and cutting 30% of greenhouse gas (GHG) emissions in local operations by 2025.

“We will cut down virgin plastics consumption by one-third by 2025,” Nestlé Chairman and Chief Executive Officer Kais Marzouki said during the firm’s virtual 2021 Net Zero Fair on Friday. Virgin plastics are resins that are created without any recycled materials.

“We will collect and divert an annual average of 26,000 metric tons of plastic waste away from landfills and oceans…and reduce GHG emissions in our (factory, administrative office and logistics) operations by 30% by 2025,” he added.

These are some of the global food and beverage manufacturer’s new commitments in achieving its net zero emissions goal, as it tackles climate change.

“These commitments aim to support the Philippines’ Nationally Determined Contribution under the Paris Agreement to reduce and avoid carbon emissions by 75% as of 2030,” Nestlé Philippines said in a statement.

Nestlé Head of Corporate Affairs and Communications Arlene Tan-Bantoto said the company is seeking to promote responsible coffee production among its farmers and communities.

“Through the Nescafe Plan, we work hand in hand with farmer groups to empower them and build sustainable communities. We teach them responsible coffee production. We promote regenerative agriculture including reforestation,” she said during the virtual event.

Nestlé Philippines is also tackling the plastic waste crisis by developing technology to make its packaging recyclable or reusable by 2025.

In August 2020, the company became the first multinational fast-moving consumer goods company to attain plastic neutrality in the Philippines.

“This means Nestlé Philippines is collecting and co-processing, and therefore diverting from nature, the equivalent amount of plastic that it generates in its packaging. Since then, it has collected 18,000 metric tons of plastic waste in the last seven months,” it said.

Ms. Bantoto noted Nestlé is working closely with local and foreign suppliers in sourcing raw and packaging materials “with the lowest levels of GHG emissions.”

Department of Environment and Natural Resources Secretary Roy A. Cimatu, who attended the event, said that Nestlé will help the country “attain its goals of building climate change mitigation, adaptation and resilience by accelerating its actions to tackle climate change.”

“We accordingly assure Nestlé of our support as it continues to pioneer science-based environmental initiatives one after another,” he said.

During the Net Zero Fair, Nestlé employees and their families pledged their commitments in a “contract with the planet” in creating a net zero environment by planting trees, properly managing their waste, and making sustainable choices.

“Nestlé Philippines will take a leading role in working towards net zero GHG emissions by integrating sustainable practices in our operations. We will continue to seek out partnerships and collaborate with consumers, the government, industry, NGOs and other stakeholders, as we journey to a net-zero future,” Mr. Marzouki said.

“Tackling climate change cannot wait, and neither can we. And so let us all move forward for the sake of our children and future generations, rising to the challenges that lie ahead, together and united.” — Angelica Y. Yang

NEA loans to power providers hit P455M as of Aug.