Preliminary data from the PSA showed headline inflation at 4.1% in June, slowing from the year-on-year rate of 4.5% in May. However, this was still above the 2.5% recorded in June last year.

The latest headline figure is lower than the 4.3% median in a BusinessWorld poll conducted late last week. Nevertheless, it fell within the 3.9%-4.7% estimate given by the Bangko Sentral ng Pilipinas (BSP) for June. 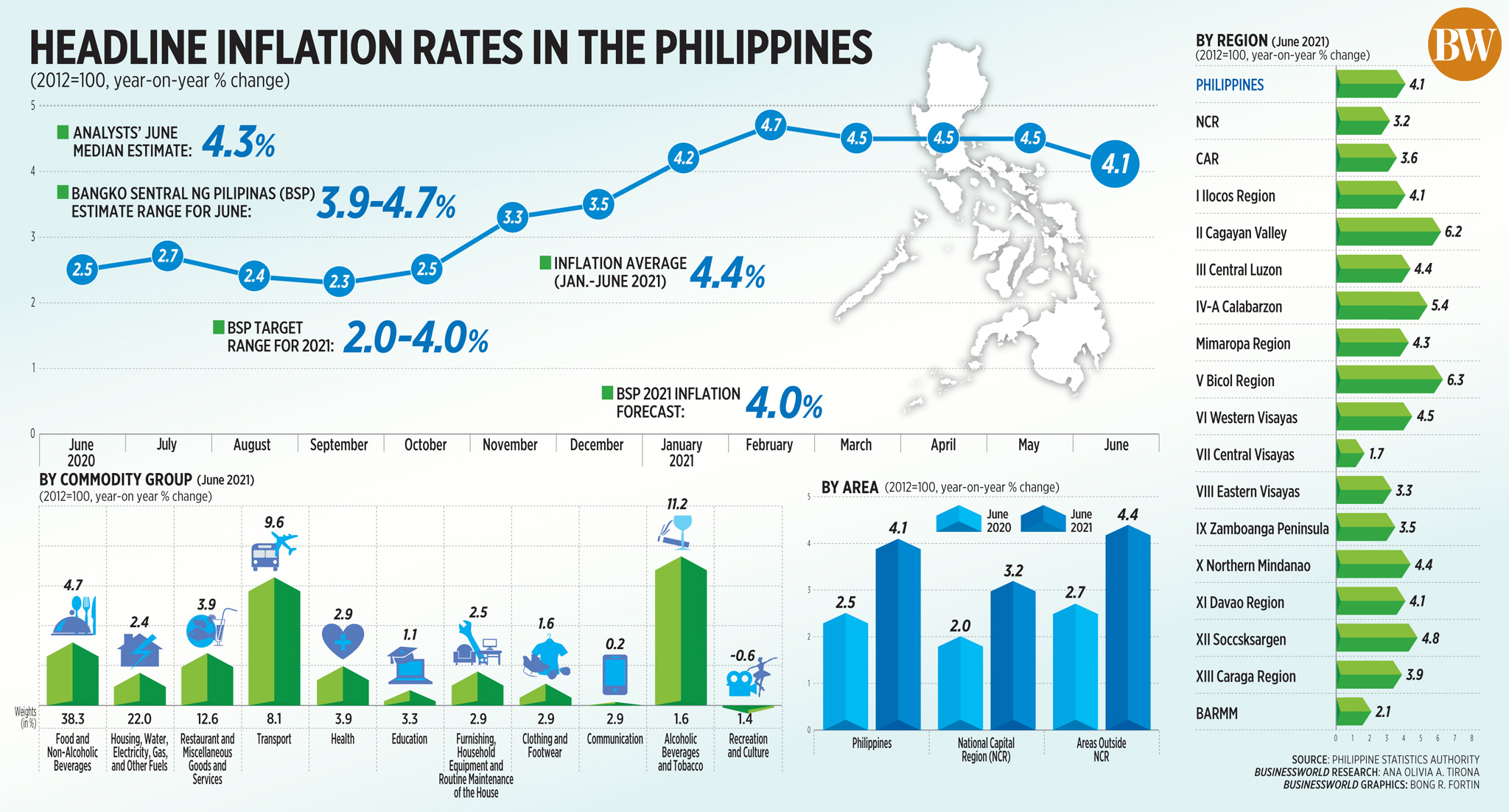 The June print was also the slowest in six months, or since the 3.5% annual rate recorded in December 2020. Prior to the June result, year on year inflation remained unchanged for three straight months at 4.5%.

Year-to-date inflation settled at 4.4%, still above the BSP’s 2%-4% target this year and above the forecast of 4% for the entire year.

The heavily weighted food and non-alcoholic beverages inched up to 4.7% in June from 4.6%.

Similar to the headline inflation result, the inflation rate for the bottom 30% of income households eased to 4.3% in June from 4.5% the previous month. This was still, however, faster than the 3% print in June 2020.

The inflation rate for the bottom 30% takes into account the spending patterns of this income segment. Thus, its consumer price index differs from that of the average household with the former assigning heavier weights on necessities.

In a statement, the National Economic and Development Authority (NEDA) attributed the easing inflation in June to government policies enacted to drive food prices down, particularly that of meat.

Food inflation stood at 4.9%, unchanged from May, but still higher than the 2.7% posted in June last year.

“The declining meat inflation points to the positive effects of Executive Orders (EO) 133 and 134. These are expected to further bring down meat prices during the second half of the year,” Socioeconomic Planning Secretary Karl Kendrick T. Chua was quoted in the NEDA statement as saying.

NEDA also cited other government interventions such as hog repopulation programs, the zoning and vaccine development amid the African Swine Fever (ASF), and the signing of EO 135 which lowered the tariff on rice imports to 35% from 40% for a year.

To recall, Mr. Duterte declared a one-year state of calamity on May 10 due to the ASF outbreak.

NEDA also noted the downtrend in transport inflation, but said the costs of transport services “remain elevated” due to physical distancing measures and the recovery of global oil prices.

“This is expected to partially decrease in the near term with the government’s accelerated vaccination program,” NEDA said.

OUTLOOK
Economists expect inflation to be on the downtrend in the next few months, but flagged risks to the outlook such as elevated global oil prices and the peso’s depreciation that will contribute to inflationary pressures due to the rise in import prices.

Bank of the Philippine Islands Lead Economist Emilio S. Neri, Jr. said their full-year inflation forecast was lowered to 4.3% from 4.5% despite the “upside risks” that may keep inflation above 4% in the coming months.

“Despite the reduction in pork tariffs, the price of pork has not shown a substantial decline. Moreover, oil companies have announced several oil price hikes in recent weeks and could translate to less favorable base effects for transport,” Mr. Neri said in an e-mail.

“Aside from inflation, another factor that could challenge the BSP’s ability to keep interest rates steady is the hawkish tilt of the Federal Reserve. The US central bank recently provided a timeline on when it could possibly hike its interest rates, hinting that it could happen in 2023. This means there is a chance that the Fed could start tapering its bond purchases in 2022,” he added.

Mr. Neri also pointed to the possibility of “monetary adjustments” in the coming months as the peso reached the P49-per-dollar level — its weakest in nearly a year.

Rizal Commercial Banking Corp. Chief Economist Michael L. Ricafort also pointed to the peso as an “offsetting risk factor for inflation” as it “would gradually lead to some pick up in import prices and overall inflation,” he said in a text message.

Nevertheless, Mr. Ricafort expects monetary policy to remain accommodative in terms of keeping the key interest rate at the record low 2% “as long as necessary, with a possible cut in large banks’ reserve requirement ratio from the current 12%…”

“With price pressures fading, we expect inflation to decelerate in the second half of the year as meat prices normalize with authorities allowing higher import volume for the commodity. Meanwhile, base effects tied to social distancing guidelines for transport and other services are also likely to fade in the coming months, offsetting a projected acceleration in utility and fuel costs given the surge in global oil prices,” Mr. Mapa said.

In an e-mail, UnionBank of the Philippines, Inc. Chief Economist Ruben Carlo O. Asuncion said inflation will likely be “slightly over” the BSP’s 2%-4% target range for this year with further easing to occur next year.

“Expect upward pressure on price levels due to oil price increases, but we maintain our view that subdued demand due to limited reopening of the local economy. This may counter the expected rise in fuel prices overall,” he said. — B. T. M. Gadon

Factory output rebounds in April after 13 months of decline – PSA