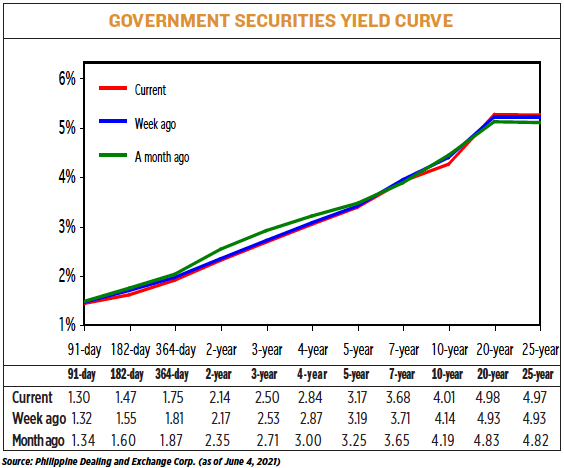 YIELDS ON government securities (GS) mostly declined last week following the release of May inflation data, which showed that the average rise in prices was steady for a third straight month.

Bond yields, which move opposite to prices, edged down by an average of 3.08 basis points (bps) week on week, based on data from the PHP Bloomberg Valuation Service Reference Rates as of June 4 published on the Philippine Dealing System’s website.

“[Last Friday’s] data confirmed that view as CPI (consumer price index) may have seen its peak,” the trader said in a Viber message.

“Yields slightly dropped across the curve with a pickup in activity week-on-week as dealers and investors continued to put their excess liquidity into work and hunted for bargains across the GS curve,” Robinsons Bank Corp. peso sovereign debt trader Kevin S. Palma said in a separate Viber message.

He said this market activity was shown by the robust demand seen at last week’s Treasury bills (T-bills) and 20-year Treasury bond (T-bond) auctions that “somewhat boosted sentiment and catalysts on the direction of yields.”

“Icing on the cake is the local CPI for the month of May, which clocked in as expected at 4.5%,” Mr. Palma added.

Inflation was steady for the third straight month at 4.5% in May, the Philippine Statistics Authority reported on Friday, matching market expectations.

The figure was within the 4-4.8% estimate by the Bangko Sentral ng Pilipinas (BSP) for that month and also matched the median estimate in a BusinessWorld poll.

Year to date, inflation was 4.4%, higher than the 2-4% target of the BSP and its revised forecast of 3.9% for the year. May was the fifth month in a row that inflation went beyond target.

Meanwhile, institutional investors continued to swamp government securities, as seen in the bids for the Bureau of the Treasury’s (BTr) offerings last week.

The BTr raised P21 billion from its offer of T-bills last week, higher than its P15-billion program, after it accepted more non-competitive bids for all the tenors amid a decline in rates.

Total bids for the short-tenored securities stood at P87.173 billion on Monday, making the offering over five times oversubscribed.

On the other hand, the Treasury raised P35 billion as planned via the reissued 25-year T-bonds it auctioned off on Tuesday. The offer was nearly two times oversubscribed as bids reached P61.914 billion. ​

For this week, the trader said the market will likely focus on how fast the country can reopen given the recent uptick in cases.

“External factors will also be a factor as we look at how fast US economy recovers,” the trader said.

Mr. Palma said reinvestment requirements due to the P121.8 billion in retail Treasury bonds maturing on June 13 will drive demand for government securities in both primary and secondary markets this week.

“T-bill auction results should guide direction for short dates, while the seven-year [bond] reissuance auction results and US Treasury yield movements will then dictate the tempo for the belly to the long-end of the curve,” he added.

The government plans to raise P3 trillion this year from onshore and offshore sources to plug a budget deficit expected to hit 8.9% of gross domestic product. — B.T.M. Gadon

Yields on gov’t securities go up on stimulus hopes