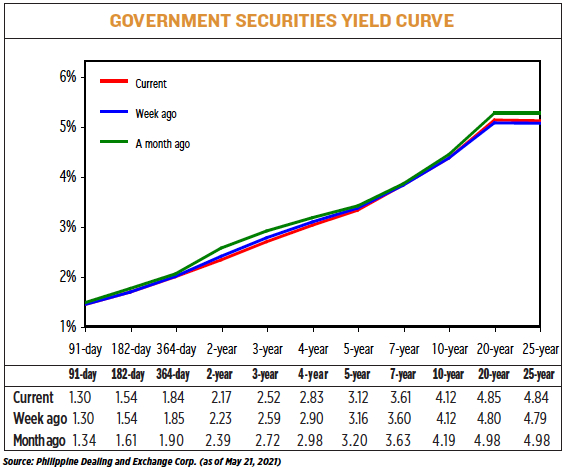 YIELDS on government securities (GS) ended mixed last week after the country’s economic managers trimmed the government’s growth target and following the release of the hawkish minutes of the US Federal Reserve’s April meeting.

GS yields fell by 1.36 basis points (bps) on average week on week, based on the PHP Bloomberg Valuation (BVAL) Service Reference Rates as of May 21 from the Philippine Dealing System’s website.

“However, sentiment was reversed later in the week following the release of April FOMC (Federal Open Market Committee) minutes which hinted hawkish remarks from the Fed,” FAMI said.

For his part, Security Bank Corp. Chief Investment Officer for Trust and Asset Management Group Noel S. Reyes said “listless trading” prevailed last week as the government cut its growth outlook due to recent lockdowns that could fuel higher inflation expectations in the second half of the year.

“This confirmed that the economy has not achieved its desired growth and that monetary stimulus of the BSP (Bangko Sentral ng Pilipinas) needs to be kept longer,” Mr. Reyes said in an e-mail on Friday.

“However, higher inflation expectation in the [second] half of the year runs against this view and resulted in the near static move of the yield curve” he added.

The Development Budget Coordination Committee on Tuesday slashed its economic growth target to 6-7% from the 6.5-7.5% projected in its December meeting as new variants of the coronavirus disease 2019 emerged and stricter lockdowns in Metro Manila and surrounding areas were imposed in the second quarter.

The economy remained in a recession in the first quarter after contracting by 4.2%. This marked the fifth consecutive quarter of GDP decline due to the coronavirus pandemic.

The government has gradually eased the strict lockdown measures reimposed in Metro Manila and its nearby provinces from March to May to curb the virus surge.

Meanwhile, minutes of the April meeting of the US Federal Reserve’s policy-making body FOMC showed a “number” of Fed officials appeared to be open to adjust the pace of asset purchases, Reuters reported.

“A number of participants suggested that if the economy continued to make rapid progress toward the (policy-setting) Committee’s goals, it might be appropriate at some point in upcoming meetings to begin discussing a plan for adjusting the pace of asset purchases,” the minutes said in the most overt reference yet to a possible taper of the Fed’s crisis-fighting bond purchases.

But that view may have suffered a blow this month with the release of data showing job growth was anemic in April. Though inflation ticked higher, also a concern cited in the minutes, the addition of just 266,000 jobs last month provided little further progress towards the Fed’s efforts to nurse the economy back to full employment.

Fed officials have pledged to keep their ultra-loose, crisis-fighting policies in place, betting that the unexpected surge in consumer prices last month stems from temporary forces that will ease on their own, and that the US jobs market needs far more time to get people back to work.

But the minutes of the April 27-28 meeting showed the Fed beginning to wrestle with the emerging difficulties of getting the $20-trillion US economy fully reopened after the disruptions caused by the coronavirus pandemic.

At the belly of the curve, yields on Treasury bonds (T-bonds) mostly fell.

For this week, Security Bank’s Mr. Reyes expects yields to stay within range, with rates of the shorter-dated papers to “drift slightly lower,” amid a lack of leads at home.

For FAMI, bond yields will take their cue from developments in global markets.

“We expect trading volume to be light and for yields to trade sideways with an upward bias [this week]. Longer than [seven-year] tenors will be more susceptible for a correction should US 10-year bond fail to stabilize near 1.65%,” FAMI said. — A.O.A. Tirona with Reuters