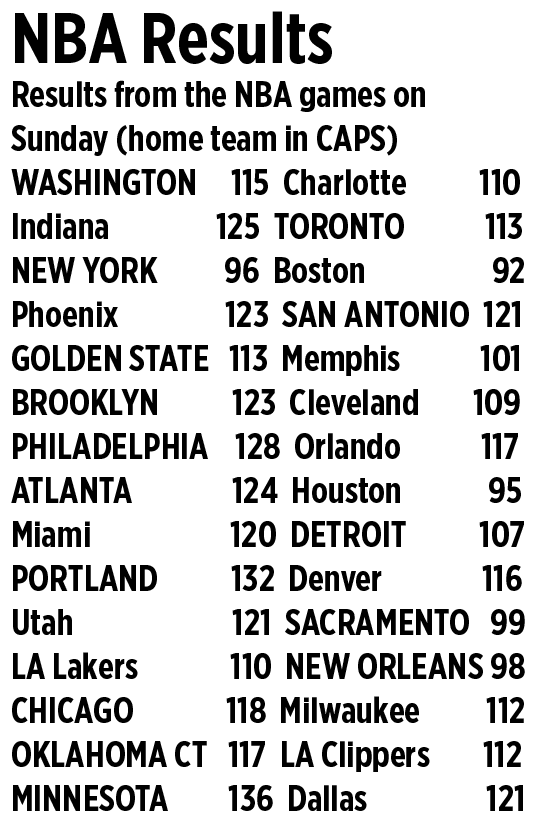 JORDAN Clarkson scored 33 points and made six 3-pointers and Bojan Bogdanović added 18 to lead the Utah Jazz to a 121-99 victory over the Sacramento Kings on Sunday night.

Rudy Gobert added 13 points and 16 rebounds. Mike Conley chipped in 11 points, nine assists, and six rebounds. Utah (52-20) clinched the No. 1 seed in the Western Conference and will have home-court advantage throughout the playoffs after finishing with the league’s best regular-season record.

The Kings (31-41) rested several key players in their final game of the season. De’Aaron Fox, Tyrese Haliburton, Harrison Barnes, Marvin Bagley III and Richaun Holmes were all the sidelines but being short-handed did not faze Sacramento early in the game.

Utah played sloppy to start the first quarter. The Jazz had six turnovers compared to only five baskets in the game’s first nine minutes.

Sacramento took advantage, ripping off an 11-0 run to stake an 11-5 lead. Delon Wright assisted a basket to start the run and capped it off with a 3-pointer. Utah climbed back to within a point on a 3-point play from Clarkson. The Kings answered with a 14-3 run — highlighted by three straight baskets from Davis — to extend their lead to 25-13.

The Kings struggled to keep pace as the second quarter progressed. After Sacramento trimmed Utah’s lead to 50-45 on back-to-back baskets from Wright and Jahmi’us Ramsey, the Jazz closed the half on a 14-4 run to take a 64-49 lead. Conley scored a pair of baskets and assisted another to fuel the run.

Utah put the game out of reach after opening the third quarter with a 20-6 run. Clarkson capped the run with a pair of 3-pointers that gave the Jazz an 84-55 lead.

WARRIORS
Stephen Curry scored a game-high 46 points en route to his second NBA scoring title and Jordan Poole stalled a rally with a late 3-pointer Sunday afternoon as the Golden State Warriors held off the visiting Memphis Grizzlies in San Francisco for a 113-101 win to claim the No. 8 position in this week’s play-in tournament. — Reuters

Emerging-market wobbles to test if Asia really is safer