THE PHILIPPINES improved its ranking in a global index that measures business bribery risks, although its score worsened.

This year’s report showed the Philippines had a “medium” risk level for commercial bribery. Its overall risk score stood at 54, worsening from last year’s 52. 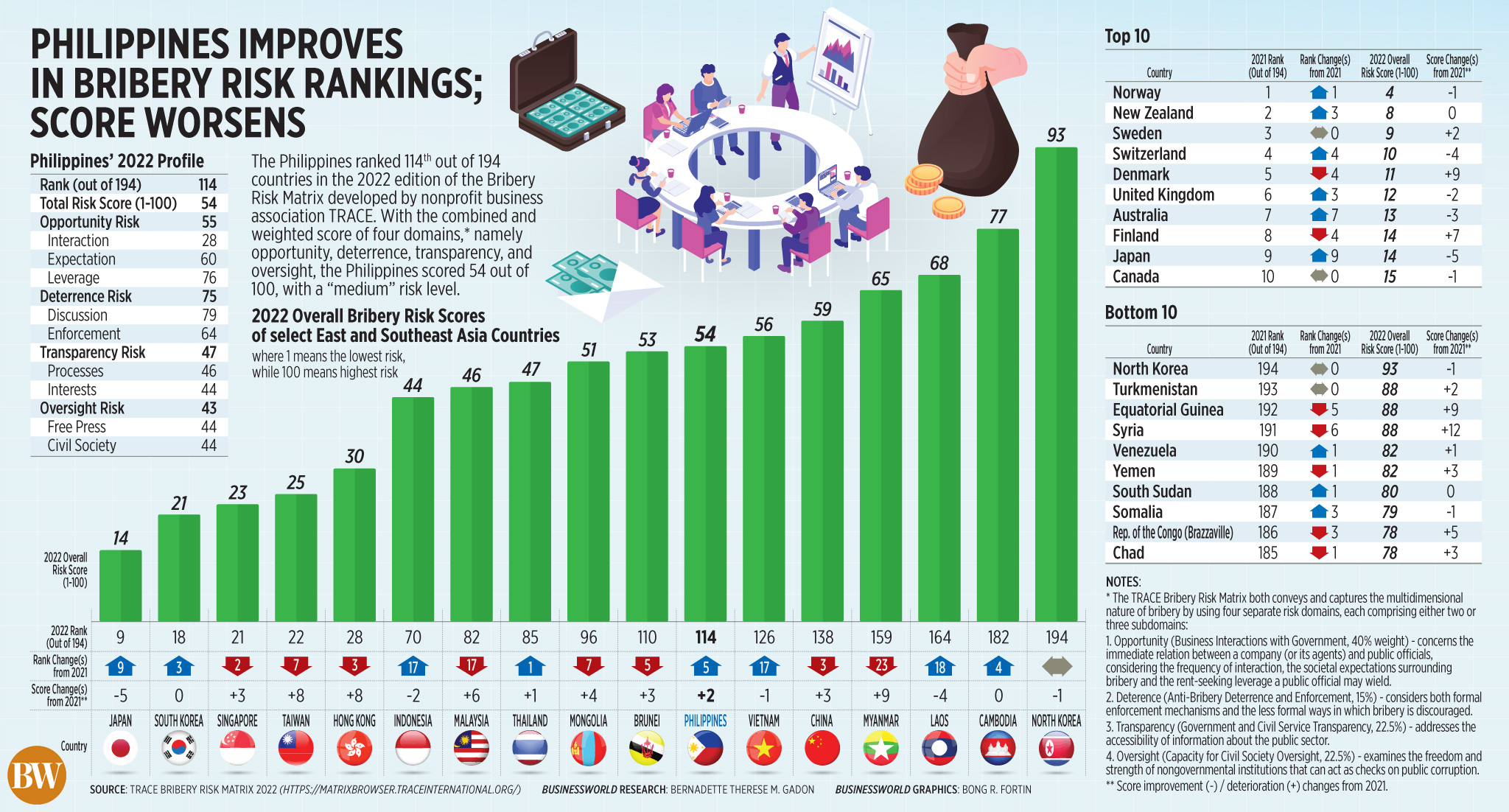 A risk score of 1 indicates the lowest risk, while a score of 100 reflects the highest risk of business bribery. TRACE said in a statement the matrix “addresses the likelihood of encountering bribe demands when doing business in a given jurisdiction.”

In the matrix, the Philippines’ score in government and civil service transparency saw the biggest decline at 47, compared with the previous score of 44.

The country scored 55 in business interactions with the government, down from last year’s 53. Its score in anti-bribery deterrence and enforcement was unchanged at 75, while its score in capacity for civil society oversight declined to 43 from 42.

“Corruption among civil servants seems to be more rampant than ever, and that’s because of the perceived opacity in government operations,” said Zy-za Nadine Suzara, Institute for Leadership, Empowerment, and Democracy (I-LEAD) executive director, in a Messenger chat. “Those are two sides of the same coin.”

“It’s alarming to see that the Philippines fared lower than our ASEAN (Association of Southeast Asian Nations) neighbors in indices such as this that measure corruption and transparency,” Ms. Suzara said.

Mr. Marcos, who took office in July, has promised to make the Philippines an “investment destination,” vowing to further cut red tape and simplify business processes.

Ms. Suzara said the Bribery Risk Matrix’s results may affect foreign investment inflows into the country since investors “tend to favor countries that are perceived as less corrupt.”

Leonardo A. Lanzona, who teaches economics at the Ateneo de Manila University, said the decline in the Philippines’ score in the bribery risk index “cannot be attributed to the pandemic (alone).”

“These practices have proliferated even before the virus. Obviously, the succeeding governments have their work cut out for them,” he said in a Messenger chat. “The fact that the country’s rating is below its ASEAN neighbors makes the Philippines once more the sick man of Asia.”

Mr. Lanzona said the government should make it a priority to address corruption.

Philip Arnold “Randy” P. Tuaño, dean of the Ateneo School of Government, said corruption in the Philippines has worsened “partly due to the fact that the previous administration has made it harder to speak about corruption as there has been a sharp decline in freedom of expression.”

“Resolving these issues of freedom of expression and resolving the procurement issues are steps in addressing the issue of corruption and bribery,” Mr. Tuaño added. “Corruption and bureaucratic inefficiency still rank highly as impediments to increasing investments in the country.”

Civic groups and watchdogs have urged Mr. Marcos to implement a massive campaign against corruption and pursue good governance reforms to boost business confidence and save public funds.

However, the Philippine leader’s allies in Congress have been pushing for the abolition of the Presidential Commission on Good Government, which was created in 1986 to go after the ill-gotten assets of the late dictator Ferdinand E. Marcos, his family, and cronies.

The PCGG is also tasked to investigate graft and corruption cases “as may be assigned by the President” and adopt “institutional safeguards to prevent corruption,” according to the Official Gazette.

“Corruption with bribery also discourages investment and business interaction with the government because it lowers the reputation of government and also creates an additional friction and cost to the undertaking of economic activities,” Renato E. Reside, Jr., an associate professor at the University of the Philippine School of Economics, said in a Messenger chat.

Mr. Reside said “pervasive bribes” may also encourage other undesirable behavior on the part of the private sector. “Checks and balances are necessary to create orderly and credible transactions between business and government.”

“Corruption can draw resources away from more productive economic activities, so the combination of wasted resources possibly going to less productive activities (can) lower growth,” Mr. Reside said. “Money spent on bribes could otherwise be spent on other productive uses.”