RULE OF LAW in the Philippines slightly improved this year, but remained one of the worst in the East Asia and Pacific region, according to a report by the international civil society organization World Justice Project (WJP).

The Philippines was among the few countries to see a rise in their score this year, WJP said in a statement, noting that adherence to the rule of law fell in 61% of countries. 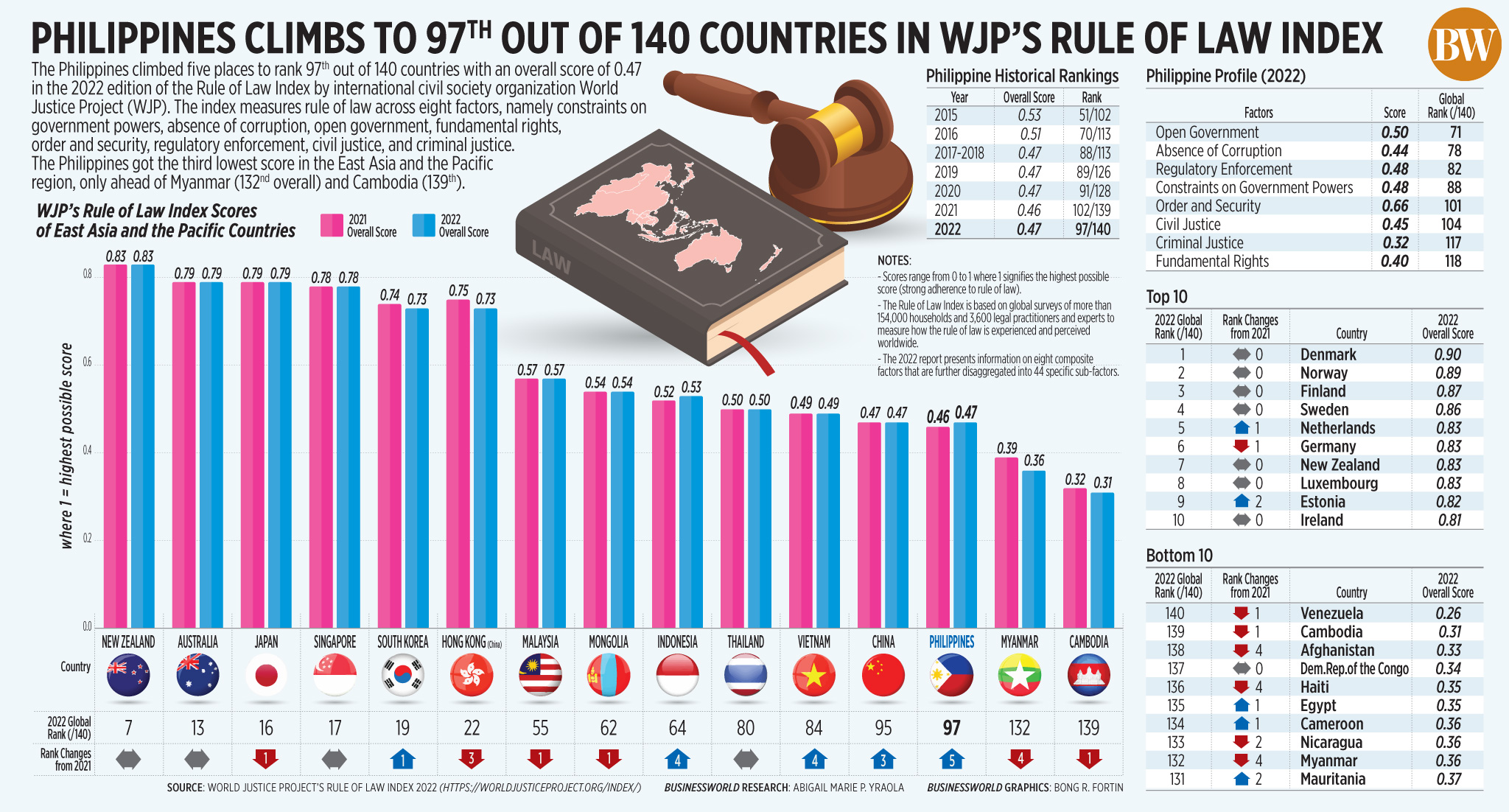 However, the Philippines was one of the worst in the region, ranking 13th out of 15 countries in East Asia and the Pacific, ahead only of Myanmar and Cambodia.

Globally, Denmark, Norway and Finland were the top three performers, while New Zealand, Australia and Japan were best in the region. Venezuela, Afghanistan and Cambodia had the lowest scores.

The Philippines ranked 16th out of 38 lower middle-income countries.

While the world is emerging from the pandemic, “the global rule of law recession continues,” WJP said.

Authoritarian trends even before the pandemic such as weaker checks on executive power and increased attacks against the media significantly led to the erosion of rule of law globally, it said.

But the decline in scores was less extreme than last year, when the pandemic disrupted justice systems and governments “exercised emergency powers that curtailed civic freedoms and bypassed transparency mechanisms,” it said.

The index measured rule of law based on global surveys of more than 154,000 households and 3,600 legal practitioners and experts.

The Philippines scored the lowest in criminal justice and fundamental rights, but had slight improvements.

Its scores in constraints on government powers, absence of corruption, open government and regulatory enforcement were stagnant.

There was a small improvement in order and security, which measures “how well a society ensures the security of persons and property.”

The Philippines, one of the oldest democracies in Asia, was ranked 102nd out of 139 countries in 2021, dropping 51 spots in six years under former President Rodrigo R. Duterte.

“The results of the index only confirm what we have witnessed for the past years under former President Duterte,” Jan Robert R. Go, who teaches politics at the University of the Philippines, said in a Facebook Messenger chat.

The pandemic exacerbated the weak rule of law and justice system in the Philippines, with Mr. Duterte militarizing his response to the virus and “highly centralized control and decision-making of his office,” he added.

“No wonder our country’s ranking dipped and is now among nondemocratic regimes in the lower end,” Mr. Go said.

Arjan P. Aguirre, a political science professor at the Ateneo de Manila University, said the improvement of the Philippines in this year’s index was “merely numerical and nothing substantial.”

“The Duterte government has done many things that undermine rule of law,” Mr. Aguirre said in a Messenger chat, citing attacks on journalists, activists and critics.

Francisco A. Magno, who teaches development studies at De La Salle University, said the improvement in the country’s ranking was likely “due to efforts to slowly demilitarize the pandemic response.”

As Mr. Duterte neared the end of his term, Mr. Magno said he “tended to be more careful in the exercise of executive overreach as it became wary of potential lawsuits with the termination of its immunity protection.”

The index should be taken seriously because it is a reflection of Philippine institutions, “which can affect our economic performance and more importantly the distribution of welfare,” economist Leonardo A. Lanzona said in a Messenger chat.

Mr. Lanzona noted the Philippines ranked 51 in the 2015 Rule of Law Index under then President Benigno S.C. Aquino III, who launched a campaign against corruption, and fell to 70 in 2016 when Mr. Duterte took office.

“The second Marcos government should be serious in strengthening government institutions by making them more open or transparent, punishing erring public officials, and promoting human rights especially of those who dissent and oppose the government,” Mr. Aguirre said, adding that the state should also improve processes in the judicial system and develop “a more effective and independent approach in solving crime.”

Bring your own jar