THE COUNTRY’S TOP 1,000 corporations saw their combined gross revenue decline for the first time in 2020 as the economy grappled with the effects of the coronavirus disease 2019 (COVID-19) pandemic. 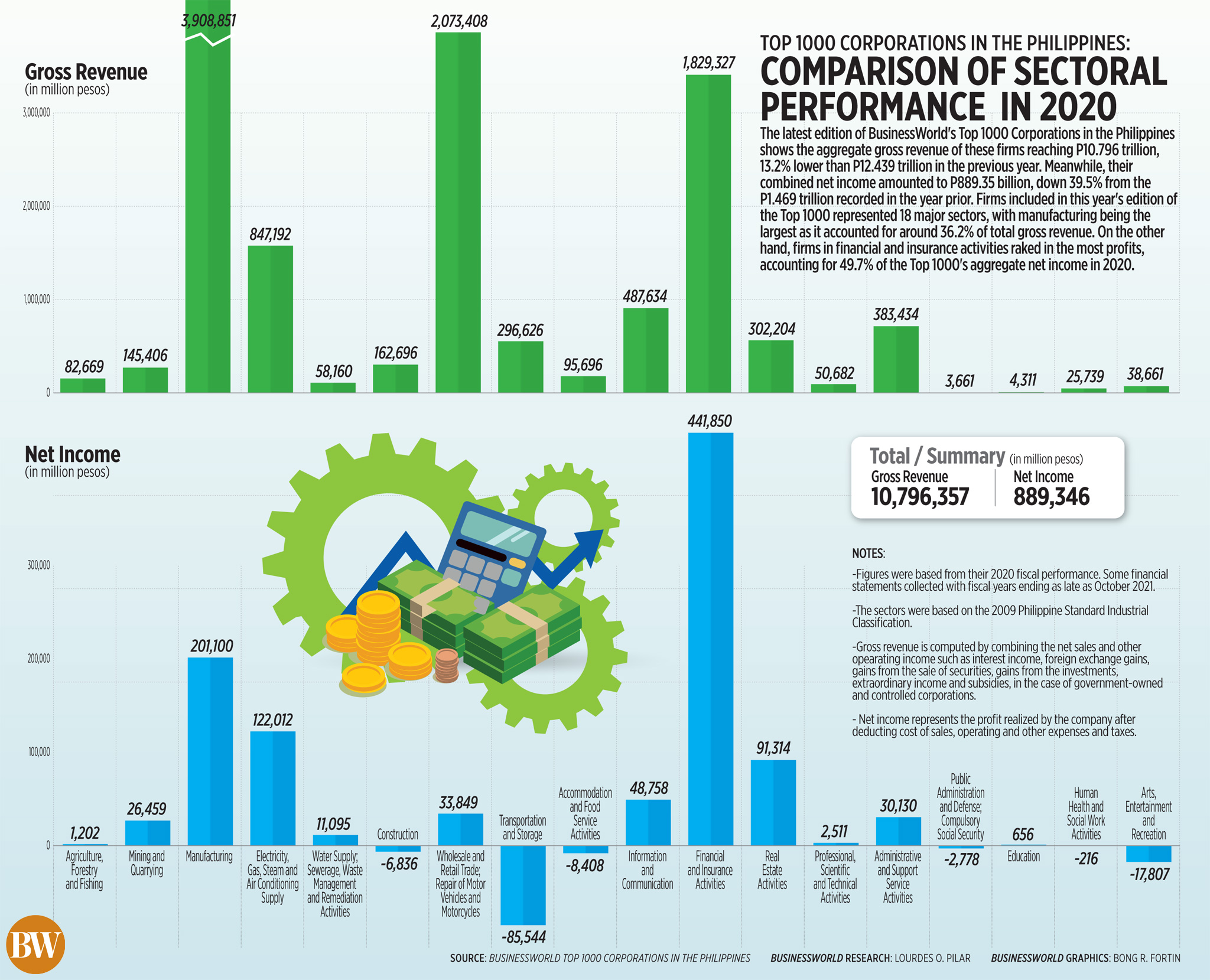 The contraction in gross revenue reflected the decline in economic output amid the onset of the COVID-19 pandemic last year that prompted companies to close shop, suspend operations or operate at below full capacity. The Philippine economy contracted by a record 9.6% in 2020 in real terms (-8.1% in current prices), its worst performance since the 1940s.

The latest edition of the Top 1000 had a gross revenue cutoff of P1.563 billion, 16% lower than the previous edition’s P1.870 billion, considering the financial statements that were collected.

The Top 1000 publication also includes a separate table ranking of these firms that include their respective subsidiaries. This is different from the main top 1,000 list wherein parent-only financial statements are used to account only for parent firms’ equitized earnings of their subsidiaries and associates.

In this year’s top 200 “consolidated” corporations, Top Frontier Investment Holdings, Inc. and subsidiaries topped the list with P774.294 billion in gross revenue in 2020, falling 27.5% from the year prior.

Of the 18 sectors represented by the top 1,000 corporations, 14 saw their combined gross revenue fall with 11 showing double-digit declines. Gross earnings of manufacturers, which made up 36.2% of the 2020 total, slipped by 13.2%. Likewise, those in the wholesale and retail trade (19.2% share) and financial and insurance activities (16.9% share), contracted by 9.8% and 7.0%, respectively.

BusinessWorld Top 1000 Corporations in the Philippines can be purchased at select branches of National Book Store, Powerbooks, Fully Booked, Office Warehouse and Rustan’s Supermarket. These can also be purchased directly through BusinessWorld’s Circulation Department at (+632) 8535-9901 loc. 256-257 or (+63) 917 658 4564. You may also e-mail at circ@bworldonline.com or contact the Research Department at research@bworldonline.com for further inquiries. The portable document format (PDF) version will be available in January 2022.