PHILIPPINE INFLATION eased in September from a near three-year high in the month prior, as the rise in the prices of food and transport slowed, the statistics agency said on Tuesday.

Preliminary data from the Philippine Statistics Authority (PSA) showed the consumer price index at 4.8% in September, slowing from the 32-month high of 4.9% in August. Still, this was above the 2.3% print recorded in September 2020.

Last month’s inflation is below the 5% median in a BusinessWorld poll conducted late last week, and is at the low end of the 4.8%-5.6% estimate given by the Bangko Sentral ng Pilipinas (BSP) for September. 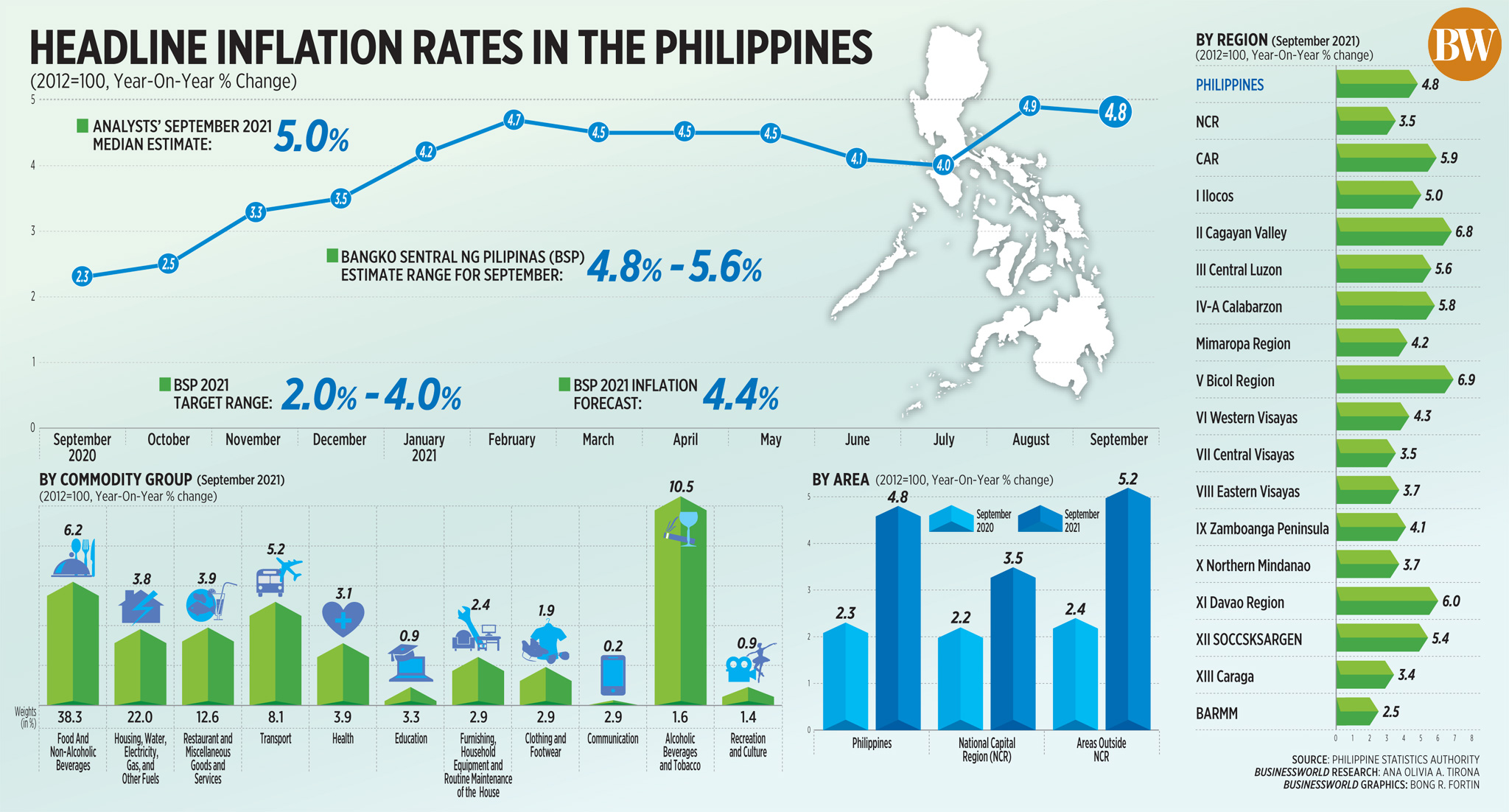 Core inflation, which discounted volatile prices of food and fuel, stood at 3.3% in August — steady from the previous month but slightly faster than last year’s 3.2%. It averaged 3.3% so far this year.

The slower annual increase in the transport index at 5.2%, from 7.2% in the previous month helped pull down inflation, the PSA said. It was also the slowest year-on-year rise in transport prices since the 2.4% in June 2020.

Similarly, the September inflation rate for the bottom 30% of income households also eased to 5% from 5.3% in August. Still, this was faster than the previous year’s 2.8%. From January to September, the bottom 30% inflation averaged 4.9%.

In a note, Nomura Chief ASEAN Economist Euben Paracuelles and analyst Rangga Cipta cited the slowdown in food prices as a factor why September inflation settled below their forecast.

In addition, transport inflation eased to 5.2% year on year from 7.2%, marking its lowest level in a year despite the uptick in crude oil prices. Household utilities inflation, however, rose to 3.8% from 3.1%, consistent with higher electricity generation rates.

In a statement, the National Economic and Development Authority (NEDA) said the decline in September inflation was aided by the government’s policies aimed at bringing down food prices.

NEDA noted zero growth in rice inflation following the implementation of Executive Order (EO) 135 which lowered the tariff on rice imports to 35% from 40% for a year.

“Meanwhile, meat inflation decreased to 15.6% from 16.4%, as pork inflation declined to 36.4% from 39%. Moreover, month-on-month meat inflation continued to decline at 1.6%, suggesting some price stabilization following the implementation of EOs No. 133 and 134,” NEDA said.

The government adopted EOs 133 and 134 in earlier in May to help increase the supply of pork in the country amid its shortage due to the African Swine Fever (ASF). These interventions increased the minimum access volume (MAV) for imported pork, and imposed a temporary reduction of pork tariffs, respectively.

‘REMAIN ELEVATED’
Bangko Sentral ng Pilipinas (BSP) Governor Benjamin E. Diokno in a statement said inflation may “remain elevated in the near term” before returning to within the 2-4% target range by end of the year.

“[T]he recent inflation upticks is expected to be driven largely by supply side factors related to weather disruptions, global oil prospects, and continued impact of the [ASF]. These supply-side shocks are best addressed by timely non-monetary policy interventions that could ease domestic supply constraints,” Mr. Diokno said, adding the return of inflation to the target band is “highly contingent” on the successful implementation of supply-side measures.

Inflation is projected to be close to the midpoint of the target range in 2022 and 2023 with expectations “remaining firmly anchored” to the target, he added.

Meanwhile, Nomura’s Messrs. Paracuelles and Cipta see upside risks to their annual inflation forecast of 4.3% despite the decline in September.

“As we have discussed in previous reports, soaring energy prices should have a significant impact on headline inflation amid limited fiscal subsidies. We estimate that, if crude oil, LNG (liquefied natural gas) and coal prices stay at current levels for the rest of the year, headline inflation would rise to 5.2% in [the fourth quarter], 1.4 percentage points above our current forecasts,” they explained.

In a separate note, ANZ Research economists Sanjay Mathur and Debalika Sarkar said that while latest result marks a “welcome break” from the trend, it is “unlikely to have any bearing on current monetary settings.”

“We… are of the view that reviving growth needs to remain the main policy imperative over the next several quarters,” they said.

In an e-mail, Asian Institute of Management economist John Paolo R. Rivera said the economy may see the combined effects of both “cost-push” and “demand-pull” inflation in the coming months as the holiday season approaches.

“[I]ts preference in the meantime to support recovery means it has limited scope to move on policy in the near-term,” Mr. Roces said.

“Fourth-quarter inflation may remain above-target… in October and November and likely easing into the BSP target range in December,” he added.

The central bank has maintained its key interest rate at a record low for the last seven consecutive policy meetings.

“The BSP stands ready to maintain its accommodative monetary policy stance for as long as necessary to support the economy’s sustained recovery to the extent that the inflation outlook would allow,” Mr. Diokno said. — Abigail Marie P. Yraola with inputs from Beatrice M. Laforga and Luz Wendy T. Noble