THE NATIONAL GOVERNMENT is proposing to allocate P1.18 trillion for infrastructure projects in 2022, as it expects the sector to drive the economic recovery from the coronavirus pandemic.

The Executive branch on Monday submitted the record P5.024-trillion national budget to the House of Representatives and the Senate.

The House is expected to start hearings on Thursday, and is targeting to have the 2022 national expenditure program approved by Sept. 30. 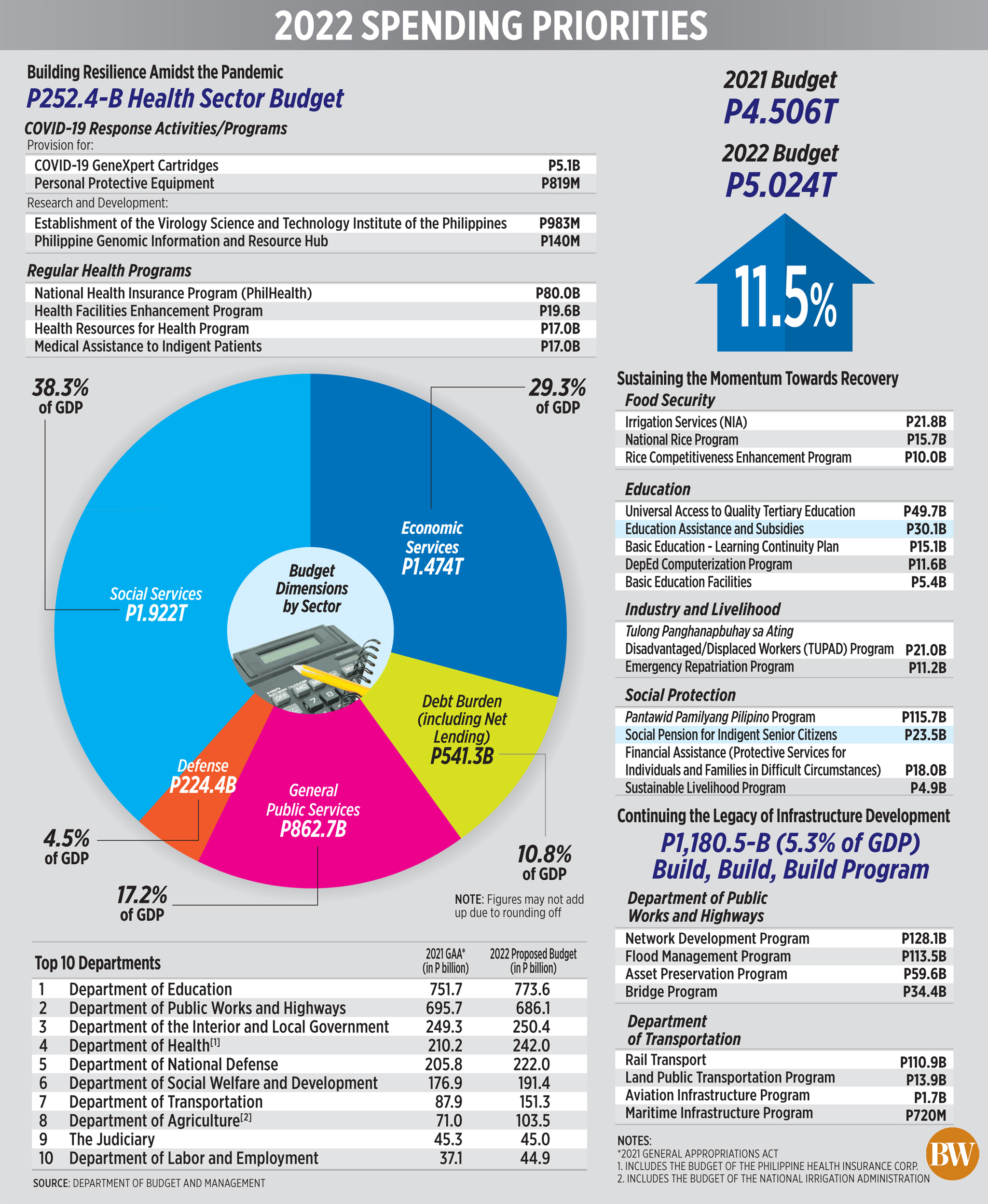 Next year’s national budget is equivalent to 22.8% of the gross domestic product (GDP) and is higher by 11.5% year on year. The government is hoping the economy will recover faster from the pandemic, as it set a GDP growth target of 7-9% next year.

“Even with limited fiscal space… the government continuously strives to stimulate the economy and help restore its momentum through various measures and policies, such as the development of the country’s infrastructure,” Mr. Duterte said.

Under the proposed budget, P1.18 trillion will go to infrastructure, equivalent to 5.3% of GDP. This is 15% higher than the P1.019 trillion allotted in this year’s budget.

However, the amount is slightly lower than the P1.29-trillion infrastructure budget approved by the Development Budget Coordination Committee (DBCC) in July.

Asked why it was reduced, Budget Undersecretary Tina Rose Marie L. Canada said via Viber that it was due to the implementation of the Mandanas ruling next year, adding that local government units (LGUs) will now have to cover the cost of local infrastructure.

Of the infrastructure budget, P686.1 billion will go to the Department of Public Works and Highways (DPWH). The DPWH will spend P128.1 billion for major road projects, P113.5 billion for flood management projects, P59.6 billion for the preventive maintenance of national roads and P34.4 billion for bridges.

The Department of Transportation (DoTr) will receive a total of P151.3 billion. Rail transport projects, such as the North-South Commuter Railway System and Metro Manila Subway Phase 1 will get the lion’s share of this allocation at P110.9 billion.

Mr. Duterte said he has directed DPWH and DoTr to ensure these projects would be implemented with public health and safety measures in place.

“We need growth-affirming projects that link centers of economic activity, open frontier areas to new development, enhance value-chains in the countryside, and improve labor productivity through shorter commutes,” he said in a statement. “For now, my cursory observation is that this is a growth-enabling infrastructure budget.”

The health sector budget is 14% higher than this year’s P221.2 billion allocation.

The government is also setting aside P115.7 billion for the Pantawid Pamilyang Pilipino program that will provide conditional cash aid to the poorest of Filipinos, while P23.5 billion will be used to provide social pension to indigent senior citizens.

For the education sector, P49.7 billion will be earmarked for the implementation of universal access to tertiary education and P30.1 billion for education assistance and subsidies, among others.

MANDANAS RULING
The National Government is targeting to generate revenues worth P3.29 trillion or 14.9% of GDP, while expenditures are also expected to reach P4.96 trillion, equivalent to 22.4% of GDP.  For 2022, the deficit as a share of GDP will fall to 7.5% from this year’s 9.3%.

In terms of expenses, P1.456 trillion or 29% of next year’s budget will go to personnel services, while capital outlays will be allotted P939.8 billion. Maintenance and other operating expenditures will hit P777.9 billion next year, while debt burden stands at P541.3 billion.

The government allocated P1.116 trillion for LGUs, including P959.04 trillion as national tax allotment share consistent with the implementation of the Mandanas ruling. The LGUs share for 2022 is 38% higher than this year.

“Implicit in this ruling is the empowerment of LGUs to undertake full ownership of crucial basic services that have been devolved to them, based on the Local Government Code of 1991 and other pertinent laws,” Mr. Duterte said.

The government is set to devolve more functions under the National Government to LGUs next year to compensate for lost revenue from the increased share of national taxes for local governments.

Mr. Velasco in a separate statement said the House would scrutinize the proposed budget but assured that it would be passed swiftly.

“As the coronavirus pandemic drags on and with no end in sight, it is incumbent upon Congress to swiftly pass a national budget that will not only serve as an instrument for development, but also as a powerful tool to decisively defeat COVID-19 and rebuild people’s lives and livelihoods,” he said. — Russell Louis C. Ku with a report from Beatrice M. Laforga