THE COUNTRY’S agricultural output shrank by an annual 3.3% in the first quarter, as livestock and poultry production contracted, the Philippine Statistics Authority (PSA) reported on Monday.

In a statement, the PSA said the value of production in the agriculture sector at constant 2018 prices dropped by 3.3% in the January to March period, lower than the -1.7% a year ago. However, this was still a slight improvement from the -3.8% posted in the fourth quarter of 2020.

“This was due to the reduction in the livestock and poultry production. On the other hand, crops and fisheries both recorded increases in production,” the PSA said. 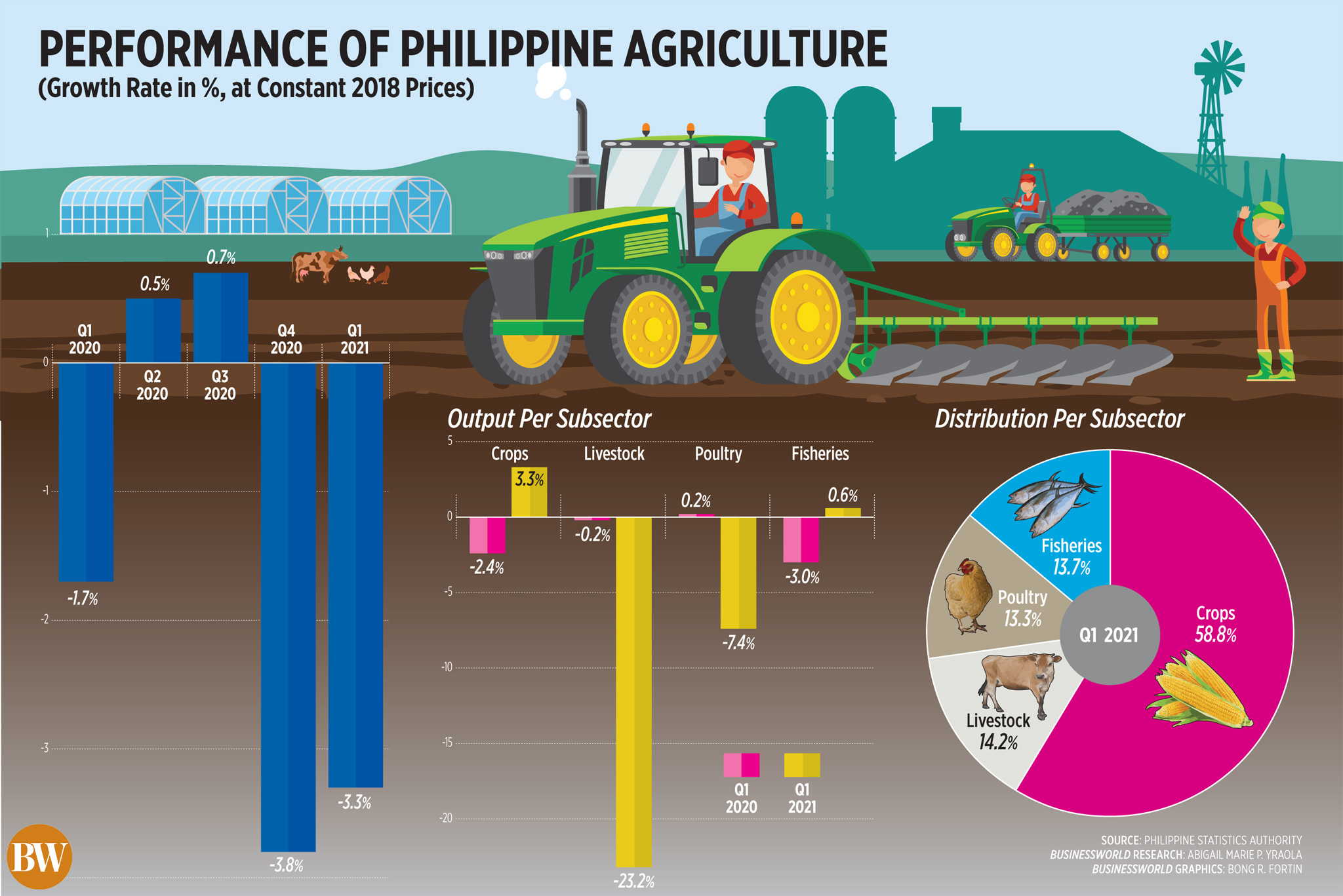 At current prices, the value of agricultural production went up 8.2% to P484.8 billion in the first three months of 2021.

Livestock production, which accounts for 14% of the agriculture sector’s output, slumped by 23.2%.

“We expected the poor performance of the hog industry as our efforts to control ASF and repopulate ASF-free areas are yet to bear fruits,” Agriculture Secretary William D. Dar said in a statement on Monday.

Rolando T. Dy, Center for Food and Agri-Business of the University of Asia and the Pacific (UA&P) executive director, said the livestock subsector, particularly the hog industry, will be able to build up its stocks by 2022.

“It takes time to build up (hog) stocks. Hog raising is different from planting crops,” Mr. Dy said in a mobile phone message.

Poultry output, which accounted for 13.3% of the agriculture sector’s total value of production, dropped by 7.4%. Duck and chicken production declined by 11.6% and 11.2%, respectively.

On the other hand, chicken egg production increased by 3%, while duck eggs rose by 0.7%.

“For demand to improve, coronavirus disease 2019 (COVID-19) must be controlled to avoid having lockdowns,” he added.

Meanwhile, crops output, which made up 59% of the agriculture sector’s total production, jumped 3.3% in the first quarter, driven by higher palay and corn production.

“Crops are expected to increase due to support to rice through the Rice Competitiveness Enhancement Fund (RCEF), and the experienced good weather during the period,” Glenn B. Gregorio, Southeast Asian Regional Center for Graduate Study and Research in Agriculture (SEARCA) Director said in a mobile phone message.

Fisheries output inched up 0.6%, thanks to double-digit growth for mudcrab or alimango (20.2%), skipjack or gulyasan (19%) and slipmouth or sapsap (15.7%). Fisheries made up 13.7% of the agriculture sector’s total value of production.

Asis G. Perez, Tugon Kabuhayan convenor, said in a mobile phone message that the performance of the fisheries subsector reflects the adjustments made by the industry amid the pandemic.

“It is important for the fisheries subsector to increase it productivity to fill the gap in animal protein availability,” Mr. Perez said.

However, he raised his concerns over the presence of Chinese vessels in parts of the West Philippine Sea.

“Based on government estimate, (it is) 1 ton per day. My own estimate is more since their vessels were described as 60 meters. Just to maintain those vessels require a least 5 tons of daily catch. This is why we are concerned,” Mr. Perez said.

The Agriculture department is targeting 2.5% growth for the agriculture sector this year.