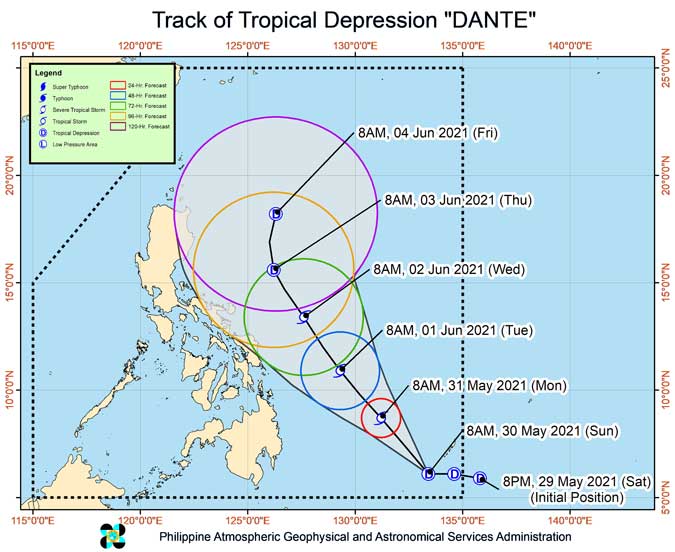 THE FOURTH typhoon to enter the country this year, named Dante, is not likely to hit land but is expected to intensify into a tropical storm category by Monday morning, according to weather bureau PAGASA.

As of Sunday 3 p.m., the tropical depression was located 835 kilometers east of Mindanao in the southern Philippines. It was moving westward over the Philippine Sea with maximum sustained winds of 55 kilometers per hour (km/h) near the center and gustiness of up to 70 km/h.

No typhoon alert level was raised as of Sunday early afternoon, but rains were expected in the Mindanao regions of Northern Mindanao, Davao, Soccsksargen, and Caraga, according to PAGASA Senior Weather Specialist Chris Perez.

“The present track forecast shows that the hoisting of Tropical Cyclone Wind Signal (TCWS) over any land area in the country remains less likely,” PAGASA said.

“However, given the uncertainty in its track forecast, any further westward shift in the track forecast may lead to the hoisting of TCWS over the eastern portion of the country,” the agency said.

Dante is forecasted to be closest to land by Wednesday, June 2, at 365 km east of Virac, Catanduanes in the central-eastern part of the country. — MSJ