MANCHESTER, England — Gabriel Jesus scored a 76th-minute winner as Manchester City beat Paris Saint-Germain (PSG) (2-1) at the Etihad Stadium on Wednesday to take their place in the Champions League knockout stages as Group A winners.

PSG also advanced to the last 16 thanks to Leipzig’s win over Club Brugge, but the loss highlighted their continued problems in finding an effective way to harness their star-studded attack.

For the opening 45 minutes, City dominated playing with their usual invention and verve while PSG’s front three of Lionel Messi, Neymar and Kylian Mbappé too often watched on from afar.

It remains a major question as to whether PSG coach Mauricio Pochettino can build a team capable of winning the Champions League when his side is so lop-sided and with his three big-name forwards reluctant to work back and assist off the ball. 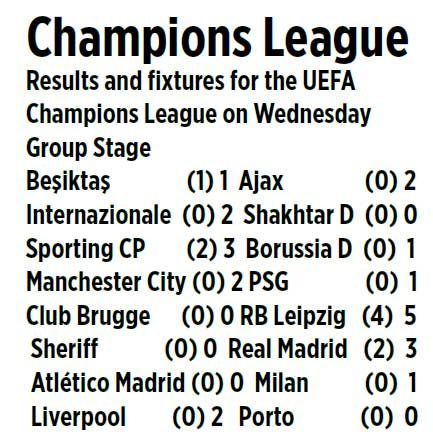 City has no such problems with Pep Guardiola’s well-drilled machine combining the technique and class with a high work ethic.

Iklay Gundogan hit the post in the 32nd minute and Riyad Mahrez twice went close while the most Paris managed before the interval was a breakaway which ended with Mbappé curling a shot over the bar.

Four minutes after the break, however, PSG grabbed the lead, Mbappé drilling the ball home at the back post after Messi’s cross had deflected off Kyle Walker into the French forward’s path.

City drew level when Raheem Sterling poked home after a lovely ball from Rodri had set up Walker for a trademark low cross. — Reuter

Elon Musk and the confessions of an Ayn Rand reader

Economic projections for 2023 and beyond

No. 1 Halep crashes out of US Open first round