Home Editors' Picks Economic projections for 2023 and beyond

The BusinessWorld Economic Forum (BWEF) 2022 today, Nov. 29, has as its theme, “Forecast 2023: Opportunity in Uncertainty.” I want to contribute to the discussion on economic forecast and projections in relation to the recently concluded big annual conference, the UN Framework Convention on Climate Change (UNFCCC) 2022 or 27th Conference of Parties of UNFCCC (COP 27) in Egypt that ended on Nov. 19.

The multilaterals, especially the ADB through its Asian Development Outlook (ADO) September 2022 Update, and the IMF World Economic Outlook (WEO) October 2022 Update, have bad and low projections of only 6.5% Philippines growth this year, even if they knew that growth in quarters 1 and 2 (Q1, Q2) was already at 7.7%. When Q3 growth came out at 7.6%, it showed their projections as having archaic and ugly assumptions because they will now assume that Q4 growth will only be 2.9% — bad and unrealistic. My own projection for Q3, which I wrote in this column on Aug. 15, was 7-7.5% growth, and for Q4 is 7.5-8% growth.

This year will further cement the new trend that South East Asia and South Asia are the fastest growing regions in the world. Malaysia, the Philippines, Vietnam, and India will be the head of the pack (Table 1). 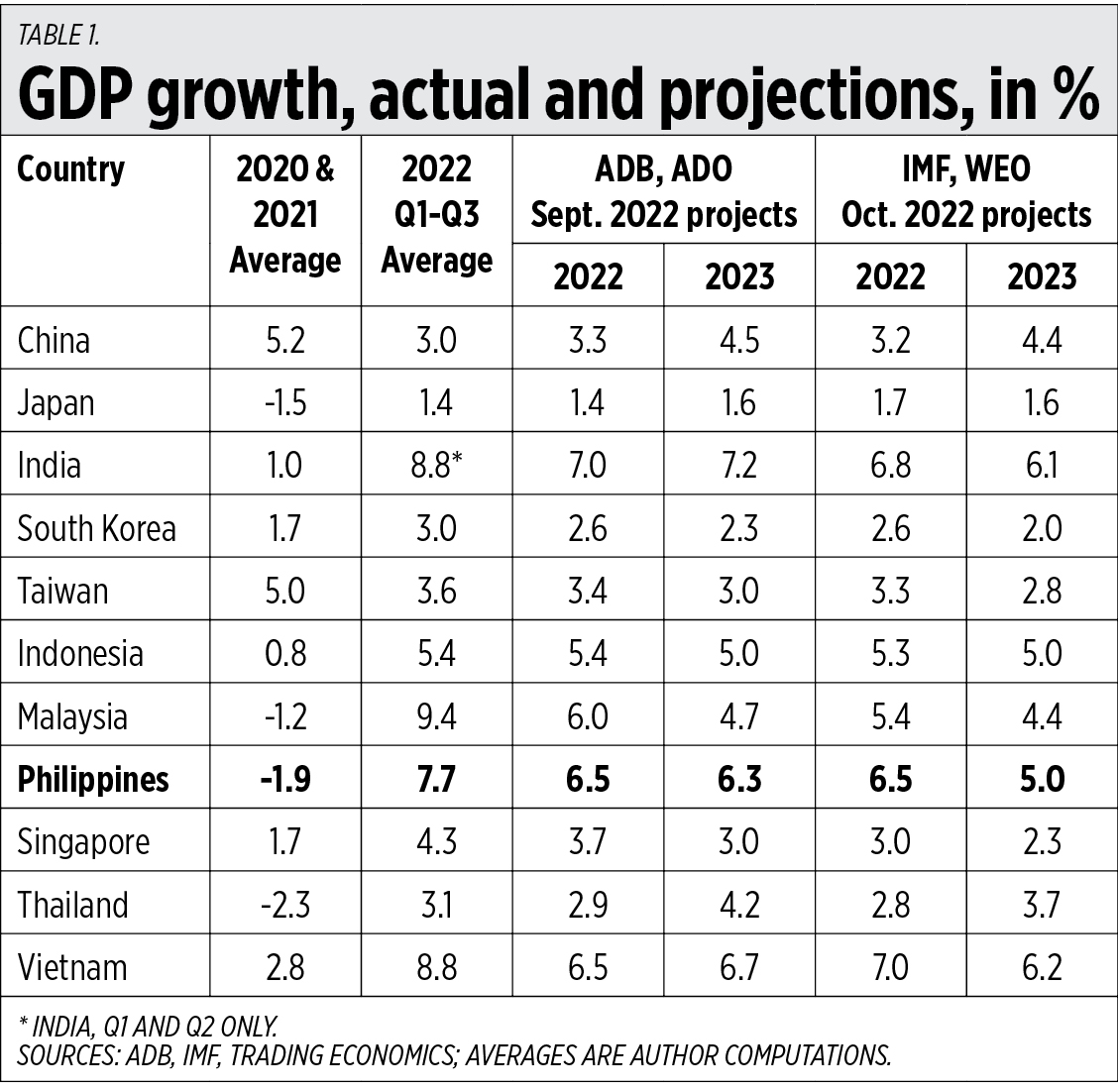 Finance Secretary Benjamin Diokno, as head of the economic team, is doing a good job in assuring the public and investors that important market-oriented reforms like the Public Service Act amendment, and the Foreign Investment and Retail Trade Liberalization Acts are in place, and no tax hikes will be done in major sectors like individual and corporate income, VAT, excise on energy products, even in so-called “sin products.”

These are good moves by Secretary Diokno. With the Philippine inflation rate already at 5.1% from January-October 2022 vs. 2% in 2020, and 3.9% in 2021, any tax hike on major sectors will have inflationary effects, especially if the tax hike is on energy products.

Last week, rumors about Secretary Diokno were published in at least two publications: “Biz Buzz: Cabinet member on way out?” (Philippine Daily Inquirer, Nov. 21) and “Mar, Gibo in play too? Salceda is top pick for DoF as Marcos grows weary of Diokno’s incompetence” (bilyonaryo.com, Nov. 21). A good quote from the President came out in the story “Marcos dismisses as ‘fake news’ report Diokno on way out at DoF” (BusinessWorld, Nov. 22), referring to BizBuzz and Bilyonaryo as dishonest and indulging in irresponsible reporting. The public should mark these two outlets. 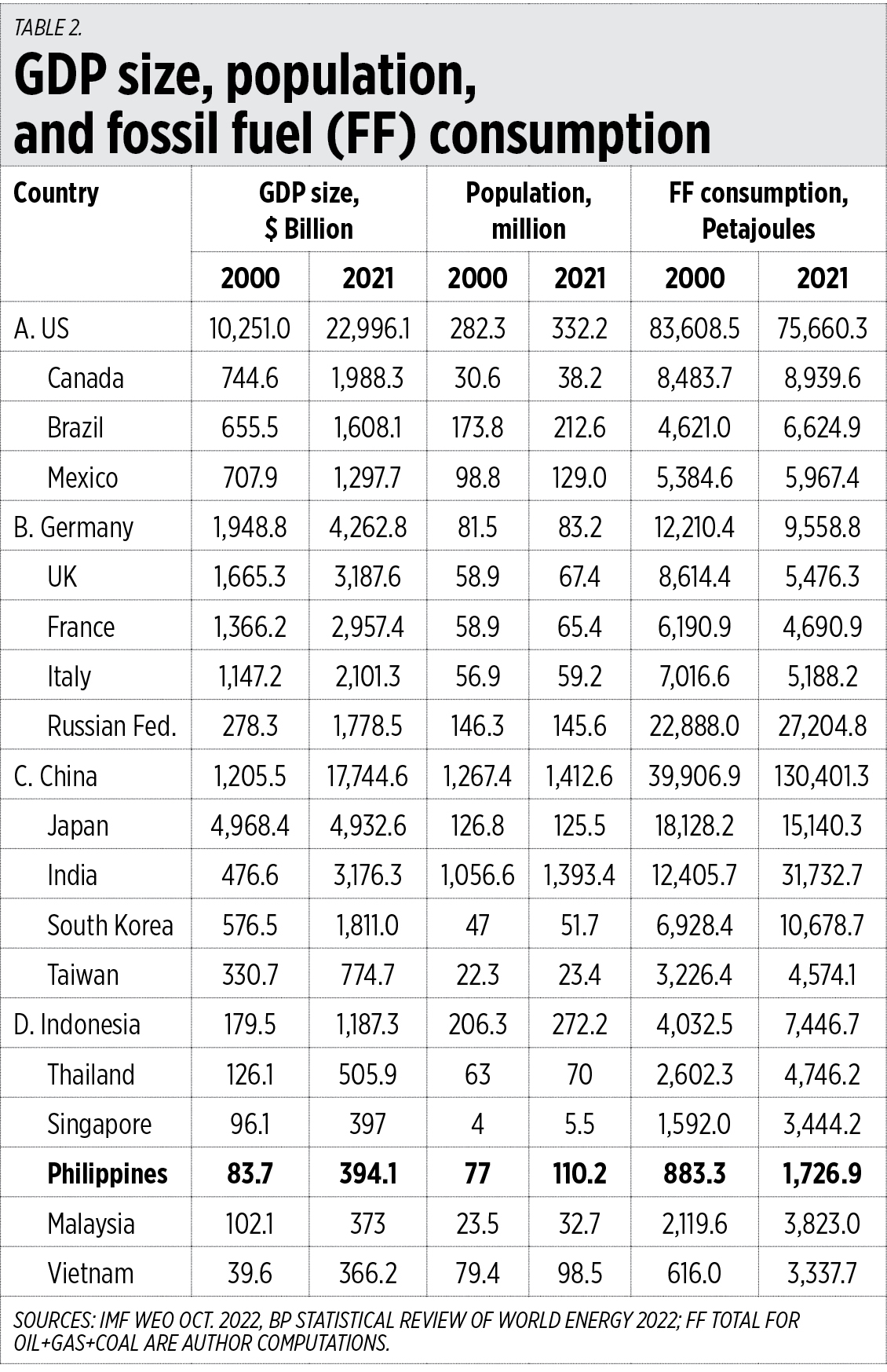 In two tables accompanying this piece, I chose the biggest economies and arranged them in group A for North and South America, group B for Europe, group C for Northeast and South Asia, and group D for the ASEAN-6.

The G7 countries — the US, Canada, Germany, the UK, France, Italy, and Japan — have had high FF consumption historically, which partly explains their high GDP per capita. Russia and Asian countries like South Korea, Taiwan, and Singapore, also have high FF consumption both in total and PJ per million population (Tables 2 and 3).

From 2020 to 2021, there was big decline in FF consumption by G7 countries except Canada and this contributed to their low average growth of 1.7% or lower over the last decade. In contrast, the rest of Asia — especially China, India, and ASEAN-6 — have had rising FF use and this contributed to their high average growth of 2.4-7.4% in the last decade. Their per capita GDP has also expanded significantly.

The long-term economic projections would be a continuation of this trend: low, anemic growth of below 1.7% for G7 and other rich countries, and 2.5% and higher growth for developing countries in Asia. 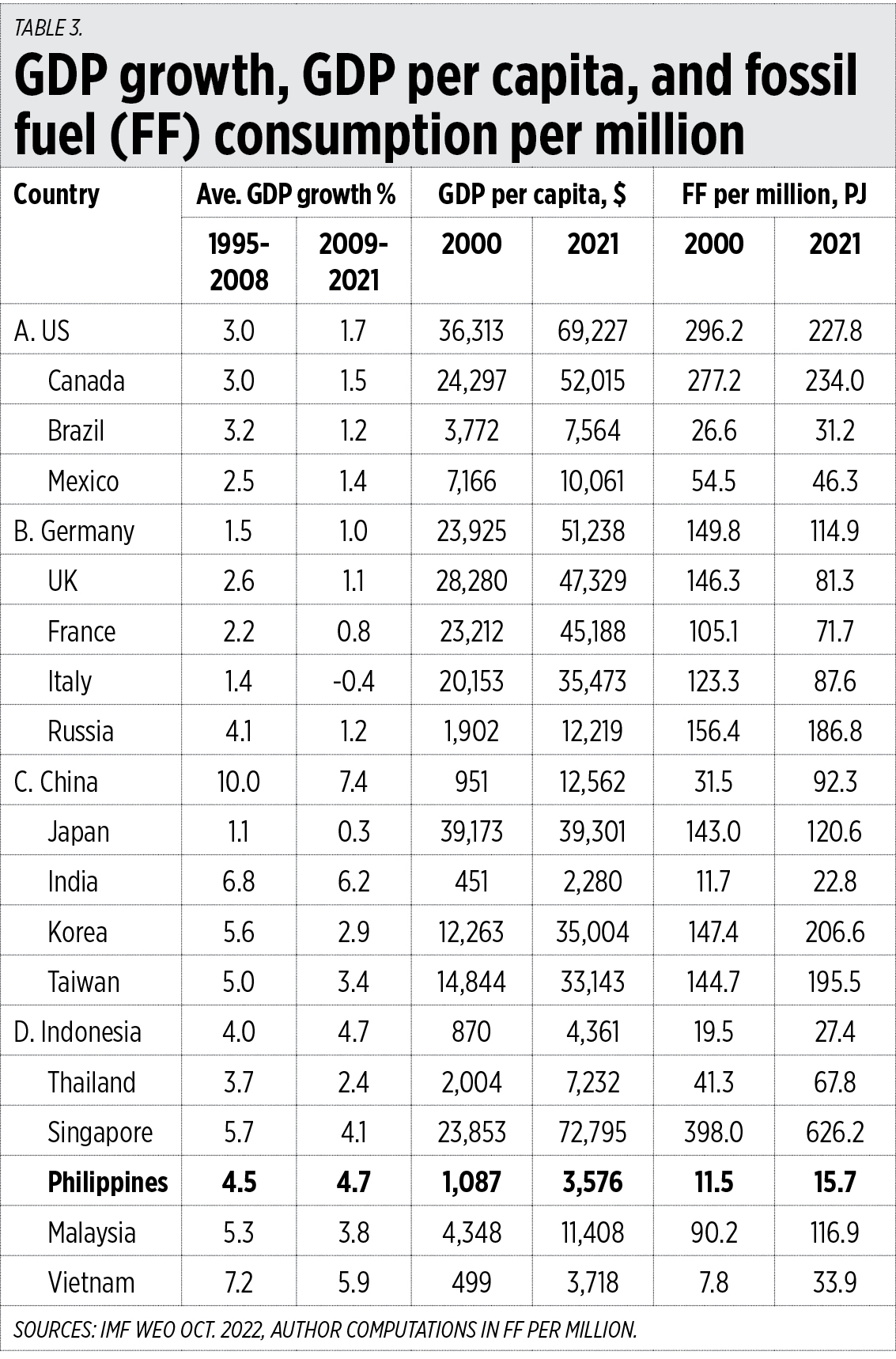 PHILIPPINES ENERGY REFORMS
The Philippines and the rest of developing world should continue their sustained FF use if they wish to have cheap and reliable energy 24/7 that will power their growth and industrialization. The Philippines, in particular, had the lowest FF use in the ASEAN-6 in 2021, only half of Vietnam’s, one-fourth of Thailand’s, one-eighth of Malaysia’s, 1/13th of Taiwan’s and South Korea’s, and 1/40th of Singapore’s.

In the power sector, the Philippines should focus on more FF plants, with 24/7 reliable and dispatchable on-demand power. Big reforms are needed in the distribution sector too as many electric cooperatives in the provinces are so inefficient and wasteful — they charge high prices with frequent power fluctuations and brownouts, and they are protected by politics via the National Electrification Administration (NEA). If they cannot be efficient, their monopoly franchise areas should shrink and efficient corporate distribution utilities like Meralco should take over.

On energy bureaucracy, UP College of Business Administration Professor Emeritus Epictetus Patalinghug, made this observation and I say Amen to it:

“The EPIRA*-led restructuring of the energy sector created a more efficient private run generation sector, but slowly enlarged the energy sector bureaucracy: DoE, Napocor, PSALM, NEA, ERC, WESM, Transco**. The octopus has multiplied post-EPIRA with no evident reduction in the cost of electricity per kilowatt hour. System losses and management inefficiency among electric coops have not disappeared.”