Home Editors' Picks The transportation sector and the motorcycle taxi 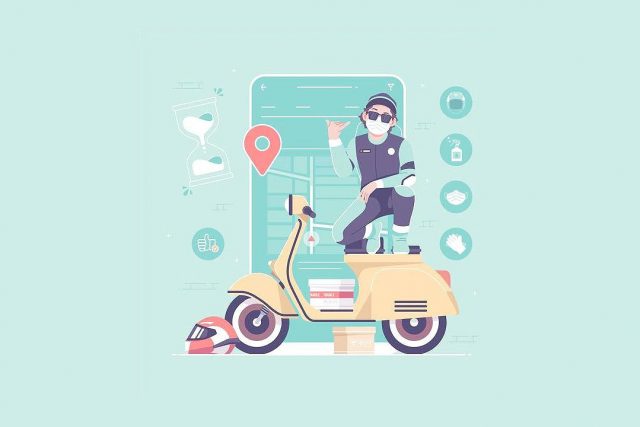 In the first three quarters of 2021, while overall GDP grew 5.1%, the transportation and storage sector grew 6.6% and land transport in particular grew 8.9%, and it comprised 50% of total production of services of the sector (Table 1). 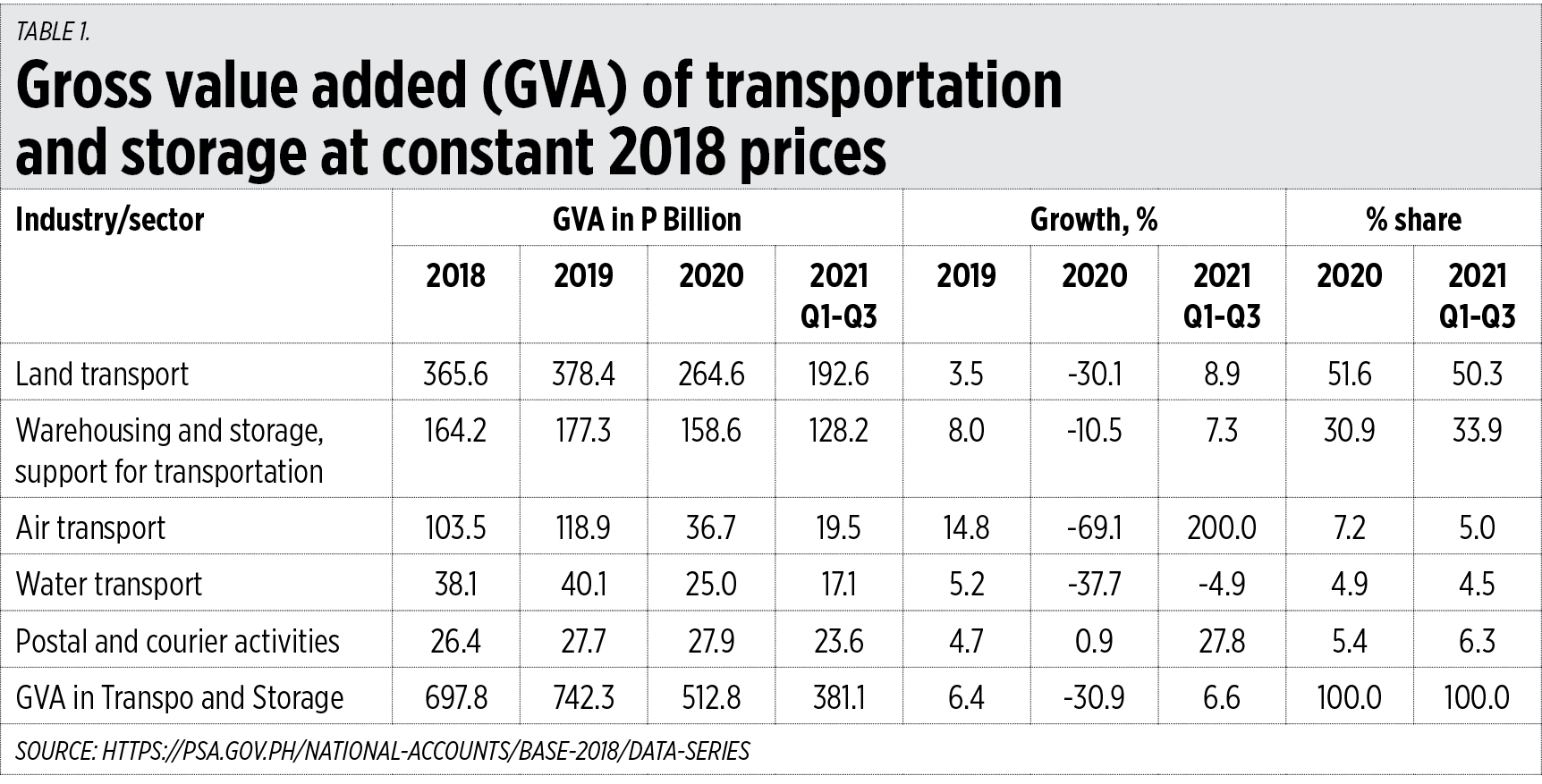 LAND TRANSPORTATION IN TOP 1,000 CORPORATIONS
I checked the performance of land transport companies that belong to the BusinessWorld Top 1,000 corporations, and saw that the numbers are interesting.

First, only one bus company, only one provider of public utility (PU) cars, and two rail companies managed to land in the Top 1,000. And second, trains that move big number of passengers suffered a big decline in gross revenue and net income in 2020. The same could be said of the bus company due to the prolonged lockdown, while the PU car company Grab Philippines managed to grow in net income (Table 2).

This implies that during the pandemic and lockdown, people have avoided mass transportation trains and buses and have used more private vehicles, or have ridden PU cars and motorcycles. The mandatory social distancing and fear of being physically close to strangers in public transport while keeping their cost of mobility low means that demand for private, cheaper transport will stay or increase. Motorcycle taxis would be the fastest and cheapest mode of transportation for poor people who do not have private vehicles, or, even if they can afford to buy a motorcycle, are scared to drive one.

MOTORCYCLE TAXI DUOPOLY
Currently, a motorcycle taxi (MCT) duopoly — comprised of Joyride and Angkas — was appointed and authorized by the government via the MCT Technical Working Group (MCT TWG) composed of the Department of Transportation, the Land Transportation Office, the Land Transportation Franchising and Regulatory Board, the Metropolitan Manila Development Authority, the Philippine National Police, and the Inter-Agency Council for Traffic or I-ACT. There is no law from Congress yet that authorizes MCT so these agencies in the Executive branch arrogated legislative power upon themselves.

Technically there are three players (Joyride, Angkas, and Move It) authorized by the TWG which also excluded a fourth player, Grab, for no clear reason, in the pilot project to study MCT. But Move It is too small so it partnered with Grab which has millions of subscribers, potential drivers, and passengers. Since the TWG has killed the Move It-Grab partnership and Move It is back to being an insignificant player, it is a de facto duopoly.

The supply of MCT is not enough so a fourth black-market MCT — “habal-habal” or unregistered MCT — appeared to fill the supply gap, and there are thousands of them nationwide especially in Davao City and the rest of Mindanao. See these reports in BusinessWorld:

The Move It-Grab partnership was allowed by the TWG to operate on Sept. 23 last year, then disallowed by Oct. 1. Perhaps that one week proved to be too successful and popular with many new drivers and passengers.

By Dec. 10, the TWG officially and permanently terminated the Grab-Move It collaboration. It recognized that the partnership had generated jobs and served the public, but still decided to stop the partnership. The TWG added that new players can come in only if the bill in Congress legalizing MCT becomes a law.

As of November 2020, the duopoly has 10,400 riders (6,400 from Angkas, 4,000 from Joyride) even if the TWG has authorized 46,713 MCT in February 2020. This means tens of thousands of units have been filled up by illegal MCT while the TWG has restricted and continues to restrict new legal MCT players. See this column’s article, https://www.bworldonline.com/tax-pressure-and-motorcycle-taxis/ (Dec. 13, 2021).

HOUSE COMMITTEE REPORT (CR) NO. 1364
On Dec. 6, 2021, the House of Representatives Committee on Transportation reported out CR No. 1364 and filed as House Bill (HB) 10571, “An Act Regulating the Operation of Motorcycles-for-hire,” substituting dozens of earlier bills allowing and regulating MCT. The bill has about 50 legislator-authors and was submitted by Congressman Edgar Mary S. Sarmiento, Chairperson of the House Committee on Transportation.

The new bill has many good provisions. It recognizes Motorcycles-For-Hire as Common Carriers via a transportation network company (TNC) or Online E-Commerce platform provider (OEPP) under Section 5; it sets the Standards and Specifications of Motorcycles (Section 7) and Qualifications of Drivers (Section 10); it allows their franchising and set the franchise requirements (Sections 8 and 9). It also sets Accreditation Requirements of TNCs and OEPPs (Section 11) and so on.

In short, the new HB 10571 sets the formal and permanent recognition of MCTs, regardless of the number of players, in very transparent ways, unlike the non-transparency of the TWG that anointed only a duopoly.

MORE BIG PLAYERS NEEDED
Many agencies in government have the habit of scuttling new and big but transparent players and keep certain sectors of the economy to be served by a few small but bureaucracy-favored players.

• In the Financial Times story “Asia-Pacific High-Growth Companies 2021,” it said many companies from Singapore (Carro, SCI Commerce,…), Indonesia (Kioson, Dana Brata), Malaysia (Carsome, SupplyCart), Thailand (SkillLane) were in the Top 100, there were none from the Philippines.

• In the UN Conference on Trade and Development report “Top 100 non-financial multinational enterprises (MNEs) from developing and transition economies 2019,” several companies from Malaysia (Petronas, Genting) and Singapore (Trafigura, Wilmar) made the list, while there were none from the Philippines.

• The Deloitte report “Technology Fast 500 Asia Pacific 2020 Ranking” was dominated by companies from China, India, Japan, Australia, and South Korea, with eight companies from the ASEAN making it to the list like Malaysia’s ARB Berhad, Indonesia’s PT Tokopedia, Singapore’s Blue Wireless PTE. Not one came from the Philippines.

The TWG can correct these pitfalls by allowing more players while waiting for Congress to pass HB 10571 into a law since there is already a counterpart Senate bill.

Congress should hasten the legislation of MCT, allow more players and more competition. It is campaign season already, the current legislators can expect more votes from tens of thousands of potential new drivers, and perhaps millions of potential passengers if they are given more choices in getting cheap and fast public mobility.

Barty party under way as Ashleigh triumphs in Paris

Some nonprofit hospitals, schools may have to pay 25% income tax, BIR says