December was the fourth consecutive month of higher GIR levels.

BSP said GIR’s month-on-month pickup was due to inflows from BSP’s foreign exchange operations and income from its investments abroad, and the national government’s net foreign currency deposits.

“The end-December 2019 level of the GIR provides an ample external liquidity buffer that is equivalent to 7.7 months’ worth of imports of goods and services and payments of primary income,” the BSP said in a statement.

The reserves are also equivalent to 5.5 times the country’s short-term external debt based on original maturities and 4.3 times based on residual maturity, the central bank added.

“The latest increase in GIR may be attributed to the increase in foreign investment largely due to improved global risk appetite as of December 2019 after the phase one US-China trade deal that led to some gains in financial markets in the US and other countries,” he said in an e-mail.

BoP in the third quarter was in surplus by $778 million, reversing a $1.9 billion deficit a year earlier.

The current account reversed to a surplus of $654 million in the third quarter from the $2.081 billion deficit a year earlier, backed by the lower deficit in the trade in goods account.

ING Bank-NV Manila Senior Economist Nicholas Antonio T. Mapa noted that foreign reserves at the end of the year are “up substantially” from the $82.49 billion at the start of 2019.

“Months of balance of payments surpluses, generated largely by financial account inflows that outpaced the current account deficit, allowed the BSP to rebuild its store of foreign currency,” he said in an e-mail.

The BSP also said gold reserves, which form part of the country’s foreign exchange buffer, were at $8.015 billion at the end of 2019, unchanged from June and down 1.69% from a year earlier.

Meanwhile, gains from the central bank’s investments overseas grew to $75.274 billion, up from the end-November and end-December 2018 levels of $73.295 billion and $66.732 billion, respectively.

Foreign-currency deposits dipped to $2.8 billion at the end of December from $3.18 billion a month earlier. It was higher compared to the $2.649 billion from a year earlier.

Meanwhile, special drawing rights (SDRs) were maintained at $1.173 billion for the second consecutive month. They were down from a year earlier, when SDR amounted to $1.183 billion.

Net international reserves (NIR) — or the difference between the central bank’s GIR and total short-term liabilities — rose to $87.83 billion from the month-earlier $86.21 billion.

“A building up of GIR levels is certainly an advantage for a small, open economy like the Philippines that is very vulnerable to global economic shocks such as oil price shocks,” Mr. Asuncion said.

“However, the continuation of the government’s spending through the recently signed 2020 national budget and the approved validity extension of the 2019 extension may have a downward pressure on GIR levels. The growth of imports through more government expenditures on infrastructure (makes the) central bank… more likely to defend the peso in much of 2020, and GIR may end flat or slightly lower come end-2020.”

“Despite a projected drawdown in GIR for this year, the Philippines will continue to enjoy ample reserves on top of enjoying the security of steady OF (overseas Filipino) remittances coupled with BPO (business process outsourcing) call center receipts to help replenish GIR from time to time,” he said. 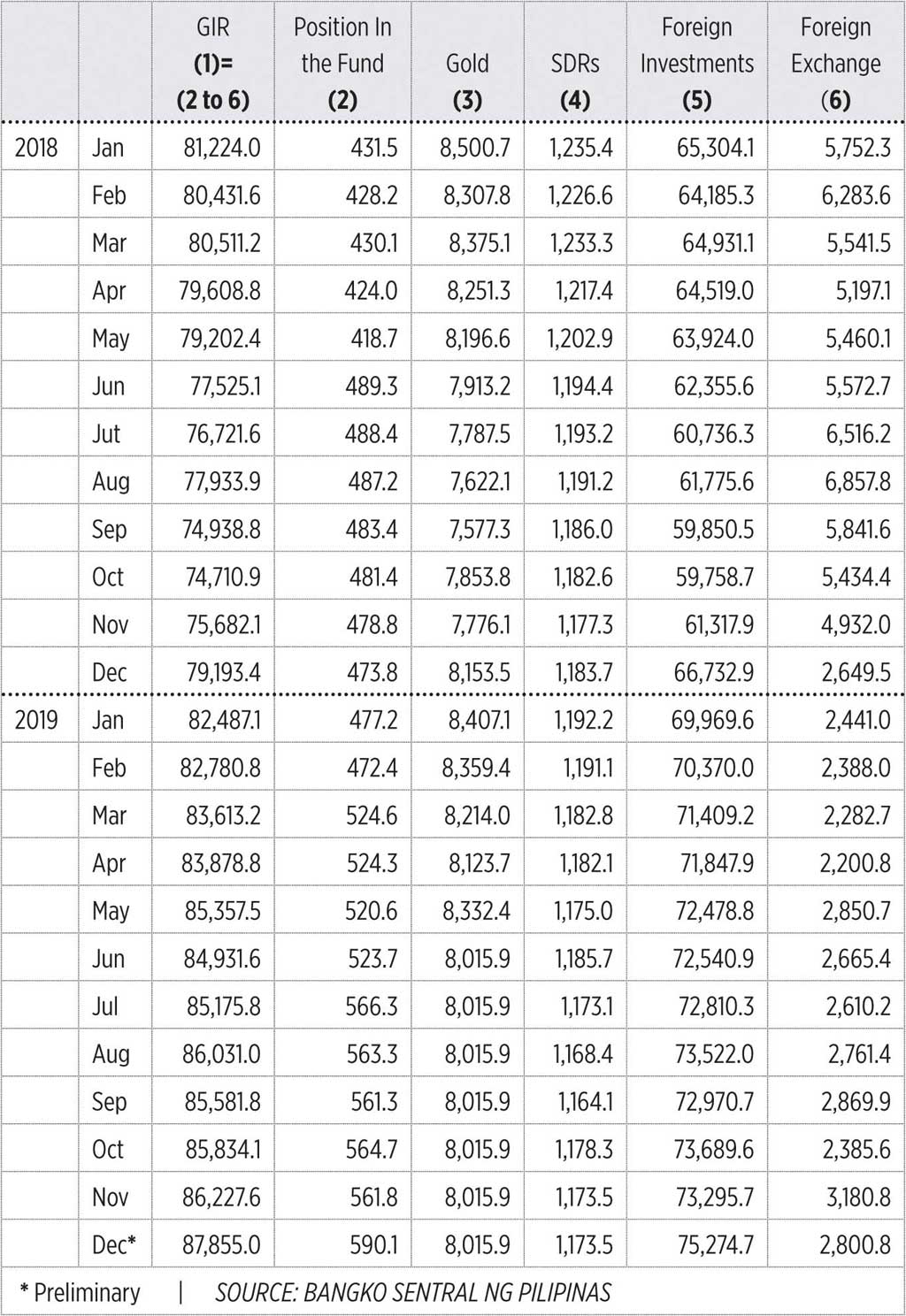