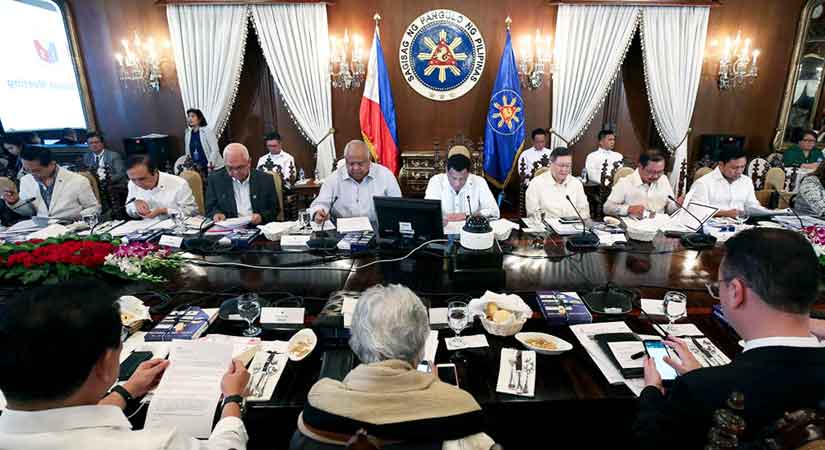 In my column of Feb. 14, 2017, I wrote, “When the chapter on the Duterte presidency is written, would there be a group perhaps known as the Marco Polo 3 (Finance Secretary Dominguez, who is said to have a stake in Marco Polo Hotel in Davao, NEDA Director General Pernia, and Budget Secretary Diokno) or a DU30 Dozen?” It was my way of asking subtly if the Duterte chapter in Philippine history would have the equivalent of Hyatt 10 or of Craven Eleven.

Philippine history’s chapters on the Joseph Estrada and Gloria Arroyo presidencies include accounts on groups known as the Craven Eleven, the infamous 11 senators who chose to hang on to the coattails of President Estrada even when his extensive involvement in illegal gambling had been exposed, and the Hyatt 10, the intrepid 10 members of President Arroyo’s Cabinet who got together at the Hyatt Regency Hotel to declare their collective resignation from the Cabinet when her attempt to influence the results of the 2004 presidential election was uncovered.

The statement was in reaction to Social Welfare Secretary Judy Taguiwalo sending to Congress a position paper opposing an administration proposal to lower the minimum age of criminal liability. Ms. Taguiwalo did not resign in spite of her strong opposition to one of President Duterte’s pet bills.

Some political pundits referred to her clinging to her Cabinet post as a case of riding the tiger. That was in reference to the Chinese proverb that “he who rides the tiger is afraid to dismount or finds it hard to get off it.”

I did not find Ms. Taguiwalo’s remaining at her post as a case of riding the tiger. She did not withdraw her opposition to the lowering of the criminal age of criminal liability. Besides, she was not in the Cabinet at the pleasure of the President. She was a nominee of the National Democratic Front of the Philippines (NDFP), a coalition of leftist political parties. The President accepted her and two other NDFP-affiliated persons into his Cabinet to gain the support of the NDFP.

But when skirmishes between Communist rebels and government troops erupted in remote areas, the détente between President Duterte and the NDFP turned volatile, leading eventually to the President’s political allies in the Commission on Appointments rejecting Ms. Taguiwalo’s appointment as Social Welfare Secretary.

The issue of staying in the Cabinet while opposing the President’s stance came up again the following year. When Secretary Carlos Dominguez III and NEDA (National Economic and Development Authority) head Ernesto Pernia told the Senate that a shift to federalism could wreak havoc on the Philippine economy, Charter Change Consultative Committee member Fr. Ranhilio Aquino said, “If (Duterte) favors federalism, let him sack Dominguez and Pernia or command them to keep their traps shut. Freedom of expression does not apply to Cabinet officials in respect to policy.”

Mr. Dominguez, Ms. Taguiwalo, and Mr. Pernia were chosen for their respective positions in the Cabinet because of their expertise in their area of responsibility, expertise gained through intensive training and extensive experience, although Mr. Dominguez is both a townmate and former classmate of Mr. Duterte.

In his third State of the Nation Address, President. Duterte admitted that it was hard for him to let go of his friends. He said he values friendship but it also has limits. “I have friends and political supporters whom I appointed to public office and then dismissed or caused to resign.”

The President said that though in reference to his friends who have been tainted with corruption. However, he also called on his friends to help him in his cause to maintain their friendships. “This is a lonely place I am hemmed in. Do not make it lonelier by forcing me to end our friendship because you gave me the reason to end it. It pains me to end the loss of friendships,” he said.

Actually, Department of Information and Communications Technology (DICT) Undersecretary Eliseo Rio, Jr. was the first member of the Duterte Cabinet to resign on his own volition. He filed his letter of resignation on Jan. 31, giving as reason his conflict with other officials in the department. “I cannot work with the undersecretaries and assistant secretaries. I’m supposed to be Undersecretary of Operations, but they are not involving me in decisions. Operations and intelligence work are very close, so whatever intel we get, Operations must be involved. I might as well get out, the salary being given to me would be a waste.”

Mr. Rio also questioned the need for a ₱400-million confidential fund for the agency in 2019. “As far as I’m concerned, DICT does not need any confidential funds. It is not our mandate to conduct surveillance and intelligence activities,” Rio said.

However, Mr. Rio said that if the President turned down his resignation, he would accept the position of Head of National Broadband Plan Backbone and Free Wi-Fi Internet Access in Public Places offered to him by DICT Secretary Gregorio Honasan. In a way, he hesitated to get off the tiger. The President finally accepted his resignation last week. I ask, did he dismount the tiger or did he choose to stay on the tiger but was thrown off?

Anyway, indications are the Duterte chapter in Philippine history would include mention of a DU30 Dozen or even DU30 Dozens. There are still many individuals in the Duterte Cabinet who serve at the pleasure of the President, having been appointed to their positions simply because they were schoolmates, provincemates, or whatever. Either they openly hail the President’s policies and programs or hold their peace, as Mr. Alvarez and Fr. Aquino suggested, to remain in the Cabinet. They go along with the President lest they draw the wrath of a man with the reputation of a cold-blooded punisher. They are afraid to dismount the tiger.

But as John F. Kennedy said on his inauguration as president of the United States, “Remember that in the past those who foolishly sought power by riding the back of the tiger ended up inside.”