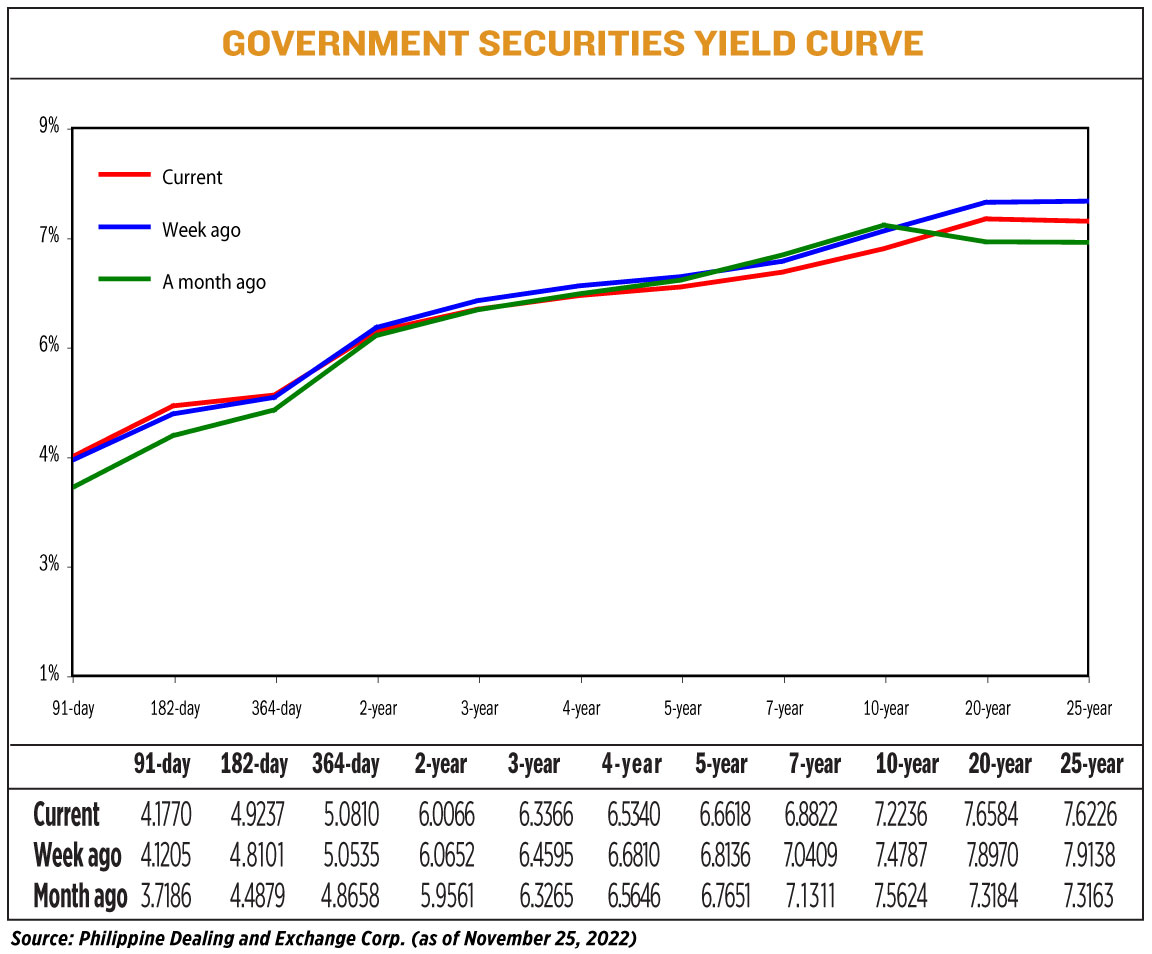 YIELDS on government securities (GS) went down last week due to dovish signals from the US Federal Reserve and following the release of the Treasury bureau’s borrowing plan in December.

GS yields, which move opposite to prices, dropped by an average of 11.15 basis points (bps) at the secondary market week on week, according to the PHP Bloomberg Valuation Service Reference Rates as of Nov. 25 published on the Philippine Dealing System’s website.

Treasury bills (T-bills) rose while Treasury bonds (T-bonds) retreated at the end of the trading week.

Minutes of the Fed’s policy Nov. 1-2 meeting where they fired off a fourth straight 75-bp hike showed a “substantial majority” of policy makers agreed it would soon be appropriate to deliver smaller increases.

The Fed has raised rates by 375 bps since March to rein in elevated inflation. Its next meeting is on Dec. 13-14.

“The move was sparked by expectations that US Fed policy rate hikes would continue but at a more measured pace,” Mr. Mapa said.

“The downshift in global yields was enough to push local yields lower,” he said.

Reuters reported last week that US Treasury yields went down following the release of the Fed meeting minutes.

For this week, the bond trader expects yields to continue seeing a downside bias, but this could be tempered by profit taking ahead of the release of Philippine November CPI data on Dec. 6.

Headline inflation stood at 7.7% in October. For the first 10 months, inflation averaged 5.4%, higher than the central bank’s 2-4% target but below its 5.8% forecast for the year.

The Bangko Sentral ng Pilipinas (BSP) has hiked borrowing costs by 300 bps since May to keep in step with the Fed’s tightening and temper rising inflation.

BSP Governor Felipe M. Medalla last week ruled out further outsized or off-cycle increases, but said they will need to keep on raising borrowing costs as the Fed’s tightening cycle continues. The Monetary Board’s next review will be held on Dec. 15. — Lourdes O. Pilar with Reuters