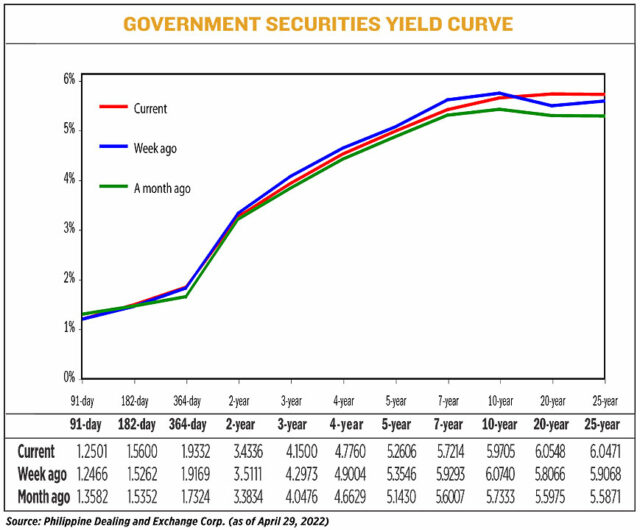 YIELDS on government securities (GS) were mixed last week after the Bangko Sentral ng Pilipinas (BSP) signaled it could start unwinding its pandemic-driven easy policy as early as June.

Bond yields, which move opposite to prices, fell by 2.84 basis points (bps) on average week on week, based on PHP Bloomberg Valuation Service Reference Rates as of April 29 published on the Philippine Dealing System’s website.

Analysts and traders said the slight drop in last week’s GS yields was primarily due to hawkish comments from the BSP chief.

“GS yields fell minimally over the week due to mixed signals from prospects of a potential BSP policy rate hike in June 2022 and increasing global growth concerns mainly from the ongoing Russia-Ukraine conflict and the waning economic activity in China from its aggressive counter-COVID measures,” a bond trader said in an e-mail.

“Market participants remained broadly cautious over the week as expectations of aggressive hawkish policy actions by central banks appears to be limited by the waning post-pandemic global growth from geopolitical tensions and inflationary worries,” the trader said.

BSP Governor Benjamin E. Diokno said in an interview with Bloomberg TV last week that the central bank may consider hiking its record-low interest rates at its June 23 meeting.

This marks a departure from Mr. Diokno’s previous statements that the central bank would only consider normalizing its stance in the second half or when the Philippine economy’s recovery firms up.

The BSP has kept its policy rates at all-time lows since November 2020 to prop up an economy severely affected by the coronavirus pandemic.

Security Bank Corp. Chief Investment Officer for Trust and Asset Management Group Noel S. Reyes said in a Viber message that the 10-year auction was the main reason yields rose initially then recovered by the end of the week.

He said traders initially focused on the shorter dates prior to the 10-year bond auction as they anticipated higher yields for the new issuance.

“Additionally, BSP advancing the possibility of the next rate hike to June rose adding to the sidelined interests for most buy-side investors prior to the auction,” he said.

“However, post-issuance saw good demand despite coming out at higher yields and this established a strong support level as a result,” Mr. Reyes added.

On Wednesday, the Bureau of the Treasury raised P17.6 billion through the reissued 10-year T-bonds, less than the programmed P35 billion even as bids reached P56.41 billion.

The papers, which have a remaining life of nine years and eight months, were awarded at an average rate of 6.313%, higher by 22.1 bps from the yield quoted on March 29, which was the last time the series was offered.

For this week, the bond trader expects local yields to move with an upward bias amid expectations of elevated inflation in April and a 50-bp rate hike by the US Federal Reserve at its policy meeting on May 3-4.

“Likely strong US labor reports might also fuel market sentiments over more hawkish policy action from the US central bank,” the trader added.

“Aside from this, the PSA (Philippine Statistics Authority) will also release the inflation report for April [this] week. A higher-than-expected print may fuel inflation expectations further, which could exert additional upward pressure on local rates,” BPI’s Mr. Neri said. — Abigail Marie P. Yraola