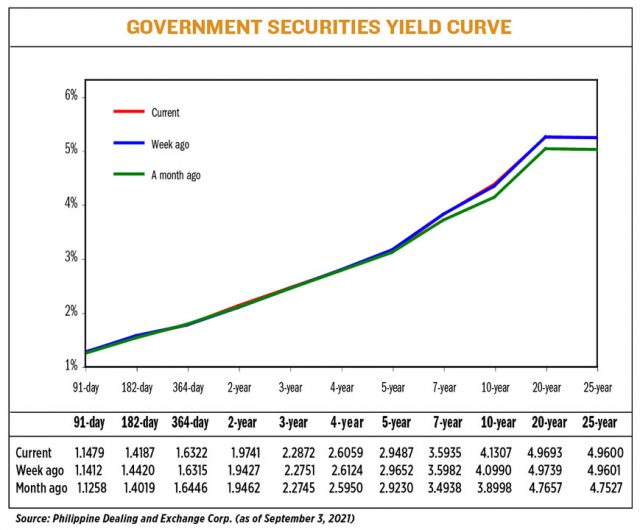 YIELDS ON government securities (GS) ended flat on Friday from their week-ago levels as investors wait for fresh leads.

GS yields inched up by an average of 0.24 basis point (bp) week on week, based on the PHP Bloomberg Valuation (BVAL) Service Reference Rates of Sept. 3 published on the Philippine Dealing System’s website.

“GS yields increased…after the BSP (Bangko Sentral ng Pilipinas) projected a higher domestic inflation for August 2021 [at] between 4.1% to 4.9%. However, the increase was limited as [US Federal Reserve Jerome H. Powell] failed to provide a clear policy guidance on a potential asset taper plan during his speech in the Jackson Hole meeting,” a bond trader said in an e-mail.

In a separate e-mail, Security Bank Corp. Chief Economist Robert Dan J. Roces  said yields were flat due to a “lack of local catalysts” and some relief on the back of Mr. Powell’s dovish comments. He added that the five-year T-bond auction was “well-received.”

Mr. Powell on Aug. 27 said they are not in a hurry to hike interest rates. He also did not hint on a specific timing for their plan to taper asset purchases, although he said they could start by this year.

Inflation averaged 4.4% in the first seven months. The BSP expects it to average 4.1% this year.

On the other hand, the Bureau of the Treasury on Wednesday raised P35 billion as planned via its offer of reissued five-year T-bonds, which have a remaining life of four years and seven months.

The notes attracted total tenders worth P76.167 billion, more than twice as much as the initial offer and slightly higher than the P75.72 billion in bids recorded when the bond series was last offered on May 6. The reissued five-year bonds fetched an average rate of 2.746%, dropping by 54.9 basis points from the 3.295% logged in the previous auction.

“Domestic yields might also increase from expectations of a higher Philippine inflation report for August 2021. However, the increase in yields might be capped by lingering worries over the global and local COVID-19 (coronavirus disease 2019) situation,“ the trader added.

Inflation picks up in July