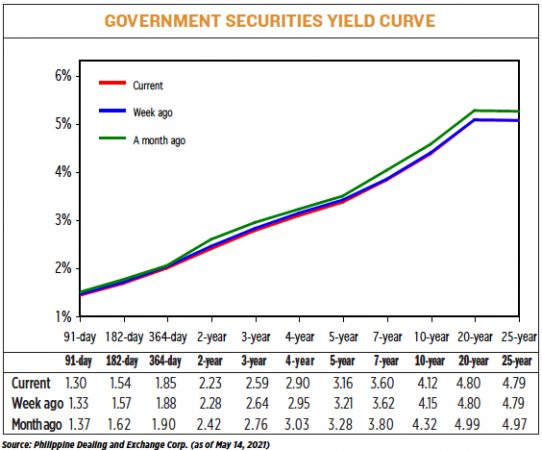 YIELDS on government securities (GS) fell across the board last week following the worse-than-expected decline in economic output in the first quarter and the central bank’s downward revision of its inflation forecast for this year.

GS yields fell by an average of 2.99 bp (bps) week on week, based on the BVAL Reference Rates published on the Philippine Dealing System’s website as of May 14.

Financial markets were closed on Thursday in observance of Eid’l Fitr.

At the secondary market on Friday, yields of all tenors were lower than week-ago levels.

“Moreover, the Monetary Board of the BSP (Bangko Sentral ng Pilipinas) kept its policy rate as widely expected by the market but lowered its 2021 inflation forecast to 3.9%, which helped improve appetite for local GS, pushing bonds yields lower week-on-week,” he added.

“However, inflation pressures from across the globe put a cap on [last] week’s rally,” the bond trader said in a Viber message.

The BSP held its key interest rate at a record low for a fourth straight meeting on Wednesday, as it continues to support the economy’s recovery from the pandemic.

The Monetary Board maintained the overnight reverse repurchase rate at a historic low of 2%, in line with expectations of 15 out of 17 analysts in a BusinessWorld poll last week. Both the lending and deposit rates were also kept at 2.5% and 1.5%, respectively.

The BSP’s decision to keep rates steady came a day after release of disappointing first-quarter GDP data. For the first three months of 2021, economic output shrank by an annual 4.2%, keeping the economy in a recession for a fifth consecutive quarter.

Meanwhile, the central bank lowered its inflation outlook this year to 3.9%, from a previous estimate of 4.2%. On the other hand, the forecast for 2022 was raised to 3%, from 2.8% previously. This will put inflation back within the BSP’s 2-4% annual target range.

Yield will likely move sideways this week and track developments here and overseas, the traders said.

“For [this week], yields may continue with its consolidation phase given the mixed developments we have onshore and abroad,” Robinsons Bank’s Mr. Palma said.

He said Monday’s T-bill auction should “guide direction” for the shorter-dated papers. Meanwhile, those in the belly and long end of the yield curve would be driven by the reissuance of seven-year bonds on Thursday and the release of the minutes of the US Federal Open Market Committee’s April 27-28 meeting on May 19.

For the bond trader: “We expect yields to trade sideways with an upward bias [this] week as market reassesses the fate of the economy amid new quarantine classification.”

Metro Manila and nearby provinces are under general community quarantine with “heightened restrictions” from May 15 to 31. – A.M.P. Yraola