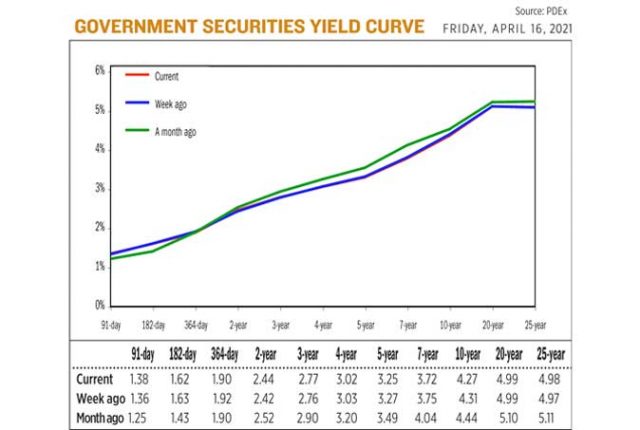 YIELDS ON government securities (GS) ended flat last week on mixed trading as the market continued to track domestic inflation and US Treasuries.

GS yields, which move opposite to prices, went down by 0.46 basis point (bp) on average week on week, based on PHP Bloomberg Valuation Service Reference Rates as of April 16 published on the Philippine Dealing System’s website.

Mr. Liboro said the slight decline in US Treasury yields “also contributed to the improvement in buying interest.”

Inflation eased to 4.5% in March following five straight months of acceleration amid a slower increase in food prices, the Philippine Statistics Authority reported earlier this month.

This brought the year-to-date headline inflation average to 4.5%, beyond the Bangko Sentral ng Pilipinas’ 2-4% target and 4.2% forecast for 2021.

Meanwhile, the yield on US 10-year Treasuries rose 6.6 bps in a late surge to 1.594% on Friday, rebounding from multi-week lows hit the prior session, Reuters reported.

For this week, the market will monitor the Bureau of the Treasury’s auction of seven-year bonds.

“Market will take its cue from [this] week’s bond auction with the market likely to nudge yields lower with inflation expectations more tame than a few short weeks ago,” ING’s Mr. Mapa said.

“We expect rates to adjust slightly higher… and then settle into a consolidation range over the next few weeks. Investors will likely wait for the next inflation print [on May 5] before positioning too aggressively,” ATRAM Trust’s Mr. Liboro added.