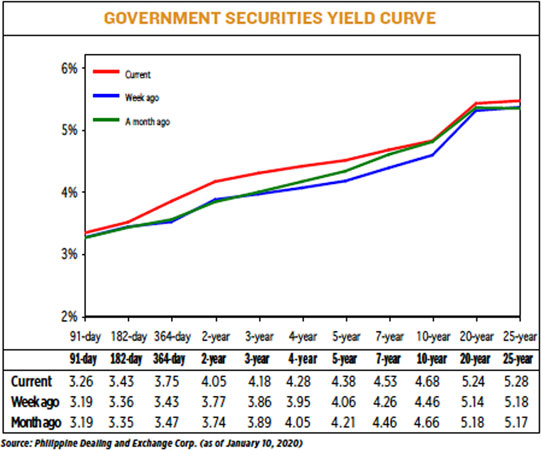 YIELDS ON government securities (GS) increased across-the-board last week amid developments abroad and at home, namely the escalation of tensions in the Middle East and faster domestic inflation.

GS yields went up by an average of 21.9 basis points (bps) week on week, based on the PHP Bloomberg Valuation Service Reference Rates as of Jan. 10 published on the Philippine Dealing System’s website.

“Local yields rose on inflation concerns amid a potential uptick in oil prices from escalating tensions in the Middle East following the release of stronger-than-expected Philippine inflation report for Dec. 2019,” a bond trader said in an e-mail interview.

For Security Bank Corp. First Vice-President and Head of Institutional Sales Carlyn Therese X. Dulay, debt yields were higher “mainly due to a wide risk-off tone in the global markets that spilled over to the GS [market]. “

“This was exacerbated by banks trimming positions, thus the exaggerated move,” Ms. Dulay said in a separate e-mail.

Headline inflation clocked in at 2.5% in December, which is the fastest in six months or since June’s 2.7%.

The December reading brought the 2019 average to 2.5%, which is well within the central bank’s 2-4% target band for the year but was faster than the full-year forecast of 2.4%.

Economists interviewed last week noted that the government’s inflation target of 2-4% may be breached if tensions in the Middle East continue to escalate and would lead to an increase in the global price of oil.

Tensions between Washington and Tehran escalated after US President Donald J. Trump authorized a drone attack at Baghdad airport that killed the Iranian military commander Qassem Soleimani earlier this month.

In retaliation, Iran responded last week through a missile attack on two Iraqi military bases that housed US coalition troops. Mr. Trump and the Iraqi military initially claimed zero casualties from the attack.

For the bond trader, yields are seen to further increase this week “as possible strong US inflation and retail sales data might heighten bets of steady US policy rates this year.”

“The signing of the first phase US-China trade deal this week might also support higher yields,” the trader added.