INFLATION likely accelerated in February due to the spike in global oil and commodity prices after Russia’s invasion of Ukraine, analysts said.

A BusinessWorld poll of 15 analysts yielded a median estimate of 3.3% in February, well within the 2-4% target set by the Bangko Sentral ng Pilipinas (BSP). If realized, it will be faster than the 3% in January, though slower than the 4.2% a year earlier. 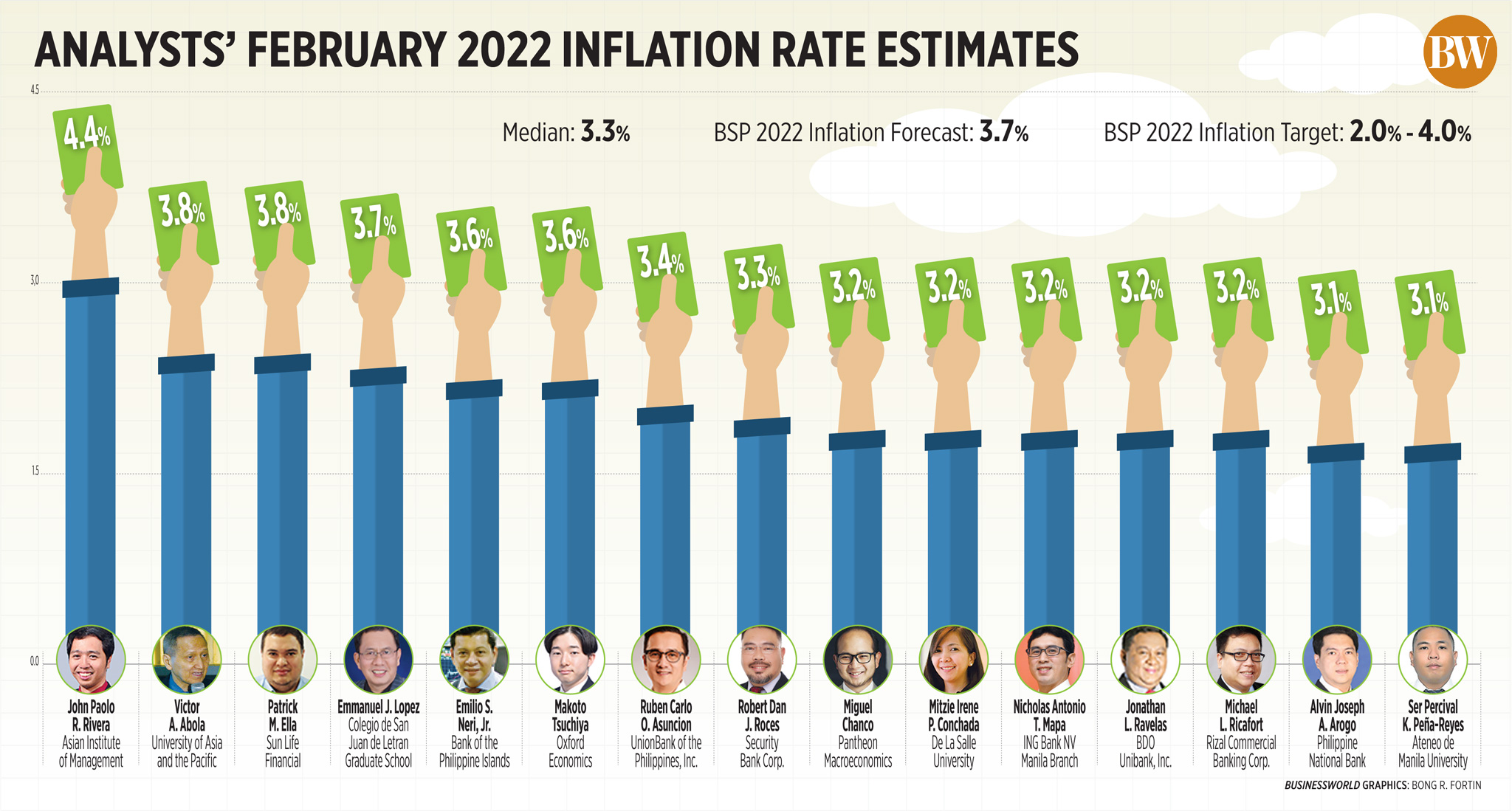 “Basically, all petroleum by-products had an average increase of P10 since January 2022. And since oil is a basic production input, it severely affects the cost of production,” Mr. Lopez said in an e-mail.

Global oil prices continued to climb in February amid tight supply and geopolitical tensions. As Russia invaded Ukraine, Brent crude on Thursday surpassed $100 a barrel for the first time since 2014, although prices eased on Friday.

Latest data from the Department of Energy showed gasoline, diesel and kerosene have increased by P8.75, P10.85, and P9.55 per liter, respectively, since the year started.

Nomura Global Markets Research on Friday said that the Philippines is among the Asian countries that will be impacted the most by the Russia-Ukraine conflict through inflation. It noted every 10% increase in oil prices could add up 0.40 percentage point to inflation. This is because of the country’s “high oil import dependence and its immediate pass through to consumers” amid the absence of subsidies, it said.

Potential supply disruption concerns in the Black Sea will not be limited to oil as it may also cause prices of other commodity prices to edge up, Security Bank Corp. Chief Economist Robert Dan J. Roces said.

“The Philippines remain one of the largest importers of wheat and soybean meal, which are used as both food production inputs and farm animal feed. These global price movements may pressure production costs, in turn costs could get passed on to consumers in the near term,” Mr. Roces said.

Russia and Ukraine are two of the biggest exporters of wheat in the world.

Mr. Roces noted looser mobility curbs as the Omicron surge subsided may have also caused faster inflation as economic activities picked up. Metro Manila and some provinces were placed under a more relaxed Alert Level 2 in February.

“For instance, the Restaurants and Accommodation Services and Personal Care and Other Services baskets may have picked up by around 0.3-0.5% on the back of a retail footprint improvement,” Mr. Roces said.

Amid likely faster increase in oil and other commodity prices, Rizal Commercial Banking Corp. Chief Economist Michael L. Ricafort said base effect will continue to be an offsetting factor as was seen since the latter part of 2021.

The central bank earlier this month raised its inflation forecast for the year to 3.7% from 3.4% previously, after officials warned of the impact of higher global oil and nonoil prices on domestic inflation.

Inflation went beyond target at 4.5% last year mainly due to higher food and oil prices due to low supply.

Despite the possibility of faster inflation in the next few months and the looming policy tightening by the US Federal Reserve, the BSP is likely to retain its stance of focusing on supporting growth and thereby keeping its accommodative stance, analysts said.

“So even if monthly inflation prints start to hover above the policy rate either in March or April…There is unlikely to be any adjustment since the next gross domestic product (GDP) growth figure is not due out till around the Presidential elections,” Bank of the Philippine Islands Lead Economist Emilio S. Neri, Jr. said.

“The BSP’s main focus when reviewing its monetary policy is GDP growth rather than inflation and the move of the US Fed. As the economy is recovering lost ground by third quarter per our estimate, we believe that the central bank becoming comfortable to start tightening the monetary environment by the middle of the year,” Philippine National Bank economist Alvin Joseph A. Arogo said.

The economy rebounded by a 5.6% growth in 2021 after the record 9.6% contraction in 2020. The preliminary first-quarter GDP report will be released on May 12, a few days after the national elections on May 9.

For ING’s Mr. Mapa, monetary policy makers may have to take lessons from the inflation upsurge in 2018 which coincided with a Fed tightening at that time. Inflation went beyond target in that year and reached a multi-year high of 6.7% by September and October, mainly due to higher rice prices.

“2022 is starting to show shades of 2018, when BSP was ultra-dovish in the face of a hawkish Fed, inflation accelerated and the peso went into freefall. Perhaps we could learn some lessons from that very recent episode as well,” he said.

Signals from Fed officials point out to a high possibility of a rate hike in March in order to quell a four-decade high inflation that has reached 7.5% in January.

The BSP has kept policy rates untouched since December 2022 as it stressed it will keep supporting economic recovery.

At its previous policy review on Feb. 17, the Monetary Board said that while they see it prudent to keep rates on hold, the BSP is planning a careful exit strategy and will implement appropriate interventions when necessary to arrest potential second-round effects amid increasing volatility in global oil prices.

The Monetary Board will have its next rate-setting meeting on March 24.