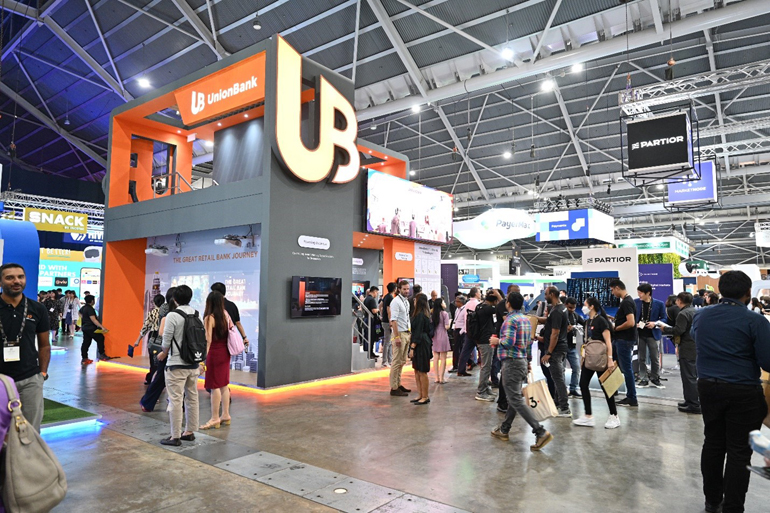 By Adrian Paul B. Conoza, Special Features and Content Editor

The Philippines is proudly represented in the global financial technology (fintech) space as Union Bank of the Philippines (UnionBank) once again joined the Singapore Fintech Festival (SFF), which returned on-site this year at the Singapore Expo Hall last Nov. 2 to 5.

Held since 2016, the SFF is considered as the premier platform for the global fintech community to engage, connect, and collaborate on issues relating to the development of financial services, public policy, and technology. This year’s edition was expected to draw participants from more than 110 countries and 2,000 organizations.

With an exhibition booth that stood out among various banks, financial institutions, and fintech players in and outside of Singapore, UnionBank showcased its digital journey toward powering a solid future for banking in the Philippines.

Throughout the three-day SFF, UnionBank gave attendees a broad view of its evolving ecosystem, which brought forth financial solutions and innovations that are beginning to draw and benefit a wide range of clients.

Foremost of these products that the Abotiz-led bank showcased in its booth is its digital banking subsidiary, UnionDigital.

A year and a few months after it was given a digital banking license by the Philippine central bank, UnionDigital announced during the first day of SFF that it has acquired 1.73 million customers, reached US$70 million in loan book size, and collected US$50 million in deposits from its first four months of operations.

Mike Singh, chief lending officer of UnionDigital, attributed the digital bank’s initial growth to how it was able to leverage customers within UnionBank’s ecosystem.

“We were starting with UnionBank’s several million customers. Some of them need additional banking services like credit; some of them fall to the middle to lower part of the income pyramid,” Mr. Singh shared in a media roundtable.

“The benefit of the digital bank is we have a very low cost to serve. So, that allows us to serve the lower half of the income pyramid with lower average loan tickets,” he added.

Maria Gaitanidou, UnionDigital’s chief product, CX, and operations officer, added that the digital bank’s progress validates its strategy of focusing on communities, particularly underbanked ones, which could benefit from UnionDigital’s offerings.

“We know that we will keep executing on that basis, and we know we can unlock additional potential portfolios,” Ms. Gaitanidou said, adding that the UnionDigital is very open to collaborating with more communities that they can serve by bringing out solutions that will meet their needs the best.

Mr. Singh also attributed UnionDigital’s recent performance to its utilization of alternative data and machine learning in predicting the credit risk of borrowers.

“The ability to predict risk for someone where you don’t see their inflow of cash, that’s really the opportunity. And we believe we have an edge there because of our data science capabilities and our access to various data sources,” he said.

Further showing the bank’s growing ecosystem, startup White Cloak Technologies, Inc., the bank’s partner behind the UnionBank Online and The Portal apps, is a major part of the development team behind UnionDigital.

Donn Carlo Gamboa, chief executive officer of White Cloak, expressed his appreciation for the bank’s continuing partnership with them since they won UnionBank-supported U:HACK hackathon.

“We’re drawn to their disposition about innovation and their compassion [being integrated] to technology. It’s been such a proud moment to see UnionDigital being so successful, and we want to be part of that journey all throughout,” Mr. Gamboa said.

UnionBank’s booth also showcased the lender’s strides in enabling and realizing open finance in the Philippines through its own open finance platform, UBX.

Jaime P. Garchitorena, managing director for payments and commerce of UBX, explained that open finance promises to bring all of the entities that a consumer transacted and give them the ability to communicate with each other so that they can attest to the consumer’s “individual-ness.” As a result, when one wants to deal with a third party, he or she does not have to gather manually all the data, since open finance has already brought those data together.

Seeing these possibilities open finance can give to consumers, UBX seeks to create a space where its ecosystems of merchants, lenders, and other participants can interact with each other.

“We’ve developed a community already, so now we’re developing the layer that will allow these communities to interact with each other and their data subjects, both at an identity and a transaction [level],” Mr. Garchitorena said.

Mario R. Domingo, global chief technology officer of UBX, added that these connections are grounded on the technologies the UnionBank ecosystem is utilizing, such as blockchain and artificial intelligence (AI).

“It’s built on performance, trust, and, most importantly, privacy and information security,” he said.

In addition, Mr. Garchitorena announced on the first day of SFF the launch of the Philippine Open Finance Foundation, which intends to bring in stakeholders from both technology and user ends to help build the policies that will define how open finance will be used in the Philippines.

“The whole point of the foundation is to make sure that the adoption of open finance, whether as a technology or a function of customers, is premised by a well-educated and trustworthy set of participants. When things go wrong, all of the participants, particularly the consumers, [should] have a strong dispute resolution mechanism to be able to help them solve the problem,” he said.

Open finance could also allow banking functionalities such as remittances, mortgages, and payments to be accessible to business partners on whatever platform they are using.

“This time, we try to make it open to them not necessarily while being inside the bank, but being in their platforms of choice, [like e-wallet or e-commerce apps,]” said Pauline Limgenco, who leads UnionBank’s Open Finance & Digital Services Center of Excellence.

“The goal is to dive more and be more proactive in bannering the open finance space, where you want to embed not only backend functionalities but different financial services and products into different platforms,” Mr. Lozada said.

UnionBank’s Digital Business Solutions, another area showcased in the bank’s booth, gives space for synergy between banks and other businesses with the goal of bringing digitalization to our consumers.

“UnionBank already has its own powerful tools, but we want to share that with our partners. We partner with experts in other industries, and we try to make them part of our accredited functions so that our clients can have access to more digital solutions,” Ms. Limgenco said.

UnionBank also showcased its capabilities in data science and AI during the SFF, particularly in terms of hyper-personalization.

Julie Anne C. dela Cruz, data science solutions head of UnionBank, shared that using data and AI enables the bank to personalize offers specific to what they look for.

“We are able to use the information that we have on them to be able to develop products that cater to their needs and address financial inclusion in terms of offering more [choices] to our customers,” Ms. dela Cruz said during the second day of SFF.

Dr. Adrienne Heinrich, head of the Artificial Intelligence and Innovation Center for Excellence at Aboitiz Data Innovation, added that through data and AI read through piles of customer feedback, they can now understand customers in a more personalized way.

“We’re using natural language processing to automatically analyze all these texts, even in such a way that we understand which customer group has which concerns and feels very happy about which experiences,” Ms. Heinrich said.

CitySavings, the thrift bank subsidiary of UnionBank which is notable for its lending to teachers and lending of motorcycles, is also benefitting from UnionBank’s data innovation capabilities, its president, Lorenzo T. Ocampo, noted.

“We work a lot with Aboitiz Digital Innovation; they create models for us. We’ve been able to build up enough data from lending that they can already create predictive patterns that will allow us to either approve or disapprove very quickly,” Mr. Ocampo said.

UnionBank’s Supply Chain Finance (SCF), which facilitates credit and payments between businesses, is also being further powered by technology as the bank launched SCF on the blockchain.

“It provides that level of assurance, and it does it in a way that’s very transparent to us,” Mr. Duarte said.

“You have the blockchain to dictate smart contract, or basically it dictates how invoices will flow from a supplier and the buyer, and how payments will go from there,” UnionBank Senior Product Manager and Squad Lead for Digital Supply Chain Finance Ronald Gerard M. Arceo said.

Recalling how their area has progressed since 2019, Mr. Arceo shared that SCF started out proving blockchain’s capability in mitigating risks by rolling out payable discounting for corporations. Then, as they proceeded to dealer financing, which specifically caters to MSMEs, they were able to expand the ecosystem SCF can serve.

“It’s proof of how reaching MSMEs through an ecosystem of communities is really something that the bank could look into. That’s the power of ecosystems: You bring in an established anchor and use their relationships with MSMEs to help them digitize and to get access to financing products,” Mr. Arceo said.

“The best way to lend unbanked segments, particularly the MSMEs, is really through working through the relationships that they have with bigger names or anchors in the ecosystem,” Mr. Duarte added.