A curious mix of relief and trepidation (plus exasperation over the lack of transport) has attended the dialing down of Metro Manila’s lockdown from “modified enhanced” to now only a “general” community quarantine. While most people are obviously pleased with the chance to return to work, a feeling of unease still hovers over them owing to the health risks they must face in their simple desire to earn a living.

The reason is that what is reputedly the world’s longest COVID-19 lockdown (two and a half months) was imposed and lifted without any clear milestones having been set and passed. No transparent, publicly announced basis has been given as to how and why it is now deemed safe to go out. What seems to have occurred instead is that sufficient political pressure — from local officials and the business sector — was finally brought to bear for the administration to overcome its indecision and temporizing on health grounds enough to worry about the quarantine’s economic cost.

Lobbying is fine, except that the administration was always insisting that science and data would guide its decisions. So, exactly what data or science was cited in relation to relaxing the NCR quarantine? After enumerating some figures on cases, recoveries, and mortality, the president on May 28 said, “So you would see that the Philippines has ratio and proportion vis-à-vis with the population, we have a low rate of mortality here in this country.” Then came the definitive statement: “All in all, para sa akin, hindi naman masama ito.” (So, ayos na. Ganu’n lang.)

The president referred to an apparent low case and mortality rate, an implicit comparison with other countries. In fact, however, the picture is hazy at best. With 188 cases per million (Table 1), the country at first glance seems to fare better than others like Malaysia or even South Korea, the latter often cited as a model of prompt response and effective control. Confirmed cases in Malaysia are 36% more and in South Korea 21% more than in the Philippines on a population-adjusted basis (Table 1). It is telling, however, that the country fares worse than Indonesia — a close comparator in terms of population age-structure, ethnicity, climate, and economic level — in both prevalence and mortality per million people. Indeed, even as Asian countries have generally fared better than Europe or North and South America in terms of mortality, the Philippines is probably the worst performer in Southeast Asia.

SEEK AND YOU SHALL FIND
A real objection to such comparisons is that not all countries have tested equally assiduously for cases, and it is likely the high case rates in Malaysia and South Korea are simply due to their far higher testing numbers. But this only makes the case worse for the Philippines, since its testing rate is also among the lowest — India does more and Indonesia even much more. This means case numbers here could actually be higher if testing had been more extensive. Hence the call for “mass” or “massive” testing. So, how much of the Philippine number is due to poor testing coverage and how much is due to the actual prevalence of the disease? No one really knows. Anyway, “para sa akin, hindi naman masama ito.”

The biggest confounding factor of the type of testing used thus far is that it focuses only on those who show symptoms of the disease (or those who, like frontline workers, are likely to contract the disease) and who present themselves for examination when ill. In other words, it draws from a statistically biased sample. It’s a lot like giving a test only to students with current failing status and using the exam to conclude how unintelligent the whole class is. In this sense it would tend to overstate the prevalence of the disease.

Its main effect however is to actually understate prevalence, since it fails to capture the infected-but-asymptomatic portion of the population, as well the many (mostly poor) who become ill but cannot have themselves tested for lack of the means to do so (Table 2). Other studies have shown poor people tend to forego medical attention even when ill to avoid trouble and expense. Returning to the exam analogy, even if only failing students take the exam, there may be poor students who never even bothered to show up. Which means underperformance may actually be under-estimated.

There are no firm global numbers for asymptomatics: estimates range from 80% of those infected (World Health Organization, WHO) to about one-fifth (a German study by Streeck et al.). Using the conservative German figure, the adjusted number of the infected including asymptomatics might be 232 rather than 186 per million, a number closer to Malaysia’s and Korea’s. The higher WHO figure could raise the number to a whopping 900-plus per million. The bottom line is that we are probably undercounting the number of COVID-19 cases. But by how much, we just don’t know.

It was precisely to gain a complete picture of the spread of the disease and of mortality that some of my UP School of Economics colleagues [Solon, Monsod et al. 2020] proposed testing based on random sampling, rather than “mass testing,” whatever that means. That would have meant drawing from every cell of Table 2, not just the shaded ones. But this is a call that has so far fallen on deaf ears, both from the generals running the inter-agency task force (who understandably cannot be expected to appreciate science), and from among the medical establishment (who are surprisingly impervious to statistical theory).

THE BODY (NON)COUNT
If the disease is more prevalent than measured, then it must at least mean mortality is actually lower, since we are at least counting dead bodies (the numerator) correctly, right? Actually, no. Chiara Zambrano of ABS-CBN News (yes, remember them?) wrote a vivid from-the-trenches story of how many deaths stemming from COVID-19-related symptoms or complications were being missed or misclassified since no tests were ever conducted — another reason random testing should have been adopted. In Quezon City from March 13 to April 17l, only 90 COVID-19-positive deaths were registered, but there were 308 COVID-19-related deaths (e.g., from respiratory and cardiovascular diseases) that never made it to the official COVID-19 death count. That is, the real COVID-19 death toll may have been more than four times that recorded.

A similar exercise was done for Jakarta, whose cemeteries counted an excess of 2,800 burials above the normal between March and April, while its COVID-19 death toll for those two months stood at only 381.

These are approximations of excess mortality, a catch-all measure of the impact of the pandemic called. It is the surge in deaths during the pandemic over and above historical or normal levels. Counts for the richer countries are more systematic. For certain periods, Italy’s excess mortality was 97% more than its official COVID-19 death toll; Britain’s was 30% more; New York’s 1%; and Istanbul’s 98% more than the official number. No similar official count or statistic exists nor to my knowledge has been attempted for the Philippines. What is only certain is that we are undercounting the COVID-19 death toll and “9 per million” is definitely an underestimate. But was the real number rising or falling before and after quarantine was lifted? By how much or how little? We do not know. At any rate, “para sa akin, hindi naman masama ito.”

BENDING IT LIKE BECKHAM (NOT)
To be fair, the “science-based” and “data-driven” measure typically cited by the health authorities is “doubling time,” or the time it takes for the number of confirmed cases or confirmed deaths to double — the longer the better. We already registered the caveats regarding these numbers. But even the trends are not straightforward.

While it is true the doubling time for the number of cases has improved to a bit more than 10 days the trend has been slow and uneven, with the daily number of cases reported still rising (Figure 1). The classic case of “bending the curve” is that of Italy, while India thus far has obviously failed. Philippine case numbers are less clear cut. Daily numbers, even with averaging, have been rising significantly since late May and are higher now than at any time during the quarantine. (We now report more new daily cases than Italy.) What does the spike from late-May mean? Is this simply capturing the hidden spread through asymptomatics that is just being revealed through wider testing? Are these just late results? Or is this really a “second wave” of infections, as Duque alleges? We simply do not know. But in any case, “para sa akin…” 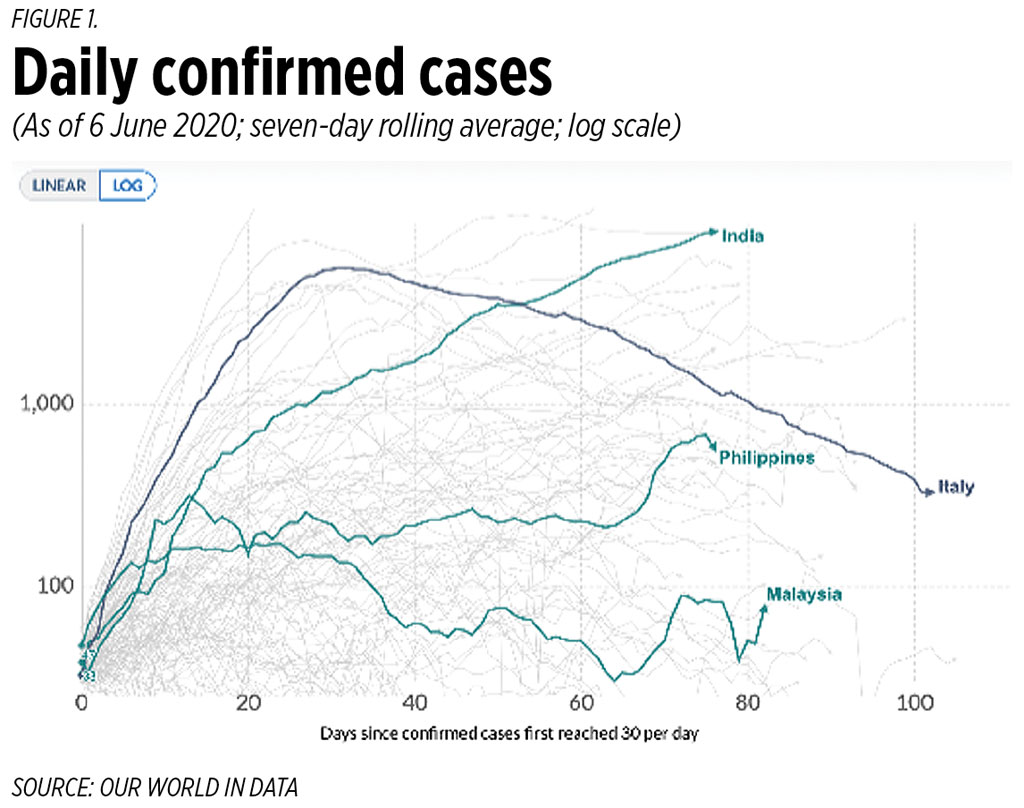 Finally, there is measured mortality, though we already know this is an underestimate. “Bending the curve” in this sense really means reducing daily confirmed deaths before the total death toll becomes too large. Malaysia essentially tamped down the daily toll to one or less around the time the total reached 100 (Figure 2). South Korea controlled it when its death toll had reached 250. Italy stabilized deaths only after these had reached 30,000, and India’s death toll is obviously still uncontrolled. The Philippines is closing on 1,000 deaths total but has not yet succeeded, although to its credit that the daily numbers are in single digits. But is this simply an artifact of poor coverage? A genuine improvement? A temporary lull? It is difficult to say. But… you know what’s next. 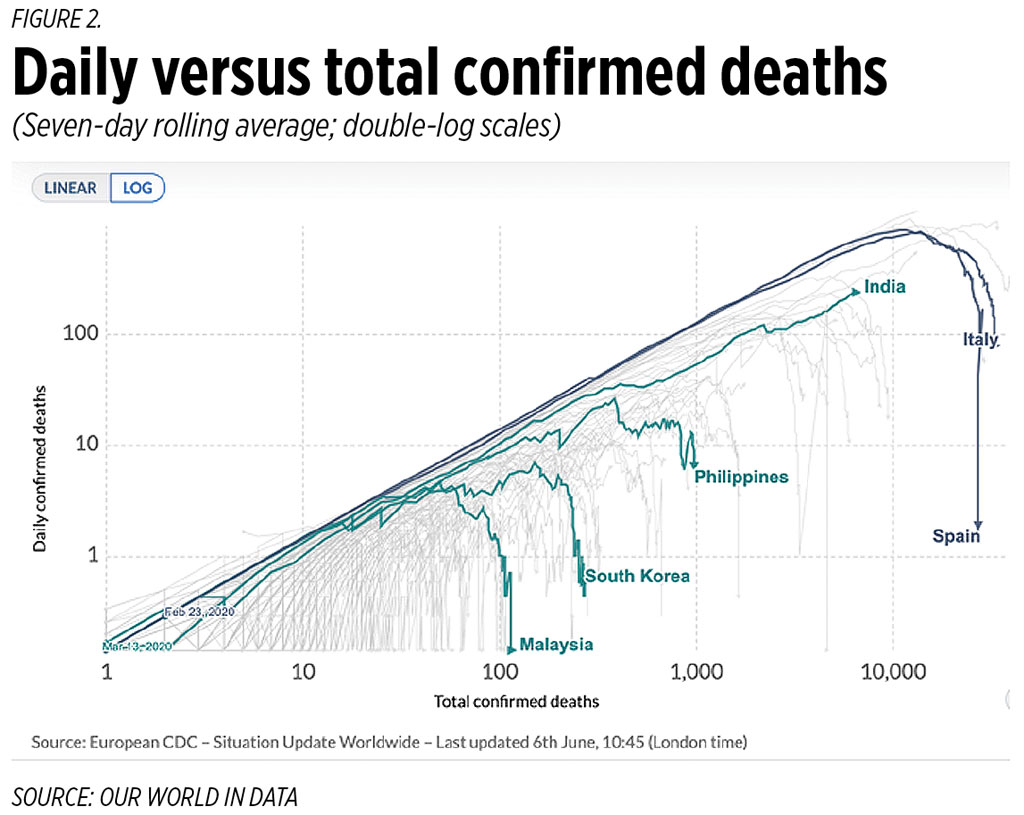 None of the foregoing by any means constitutes an argument to prolong the lockdown. It is simply to ask why and when it was sound to relax it and what role, if any, science played in the decision. Only compare this with the way Merkel’s Germany decided on their opening up based on a regular and public monitoring of their effective viral reproduction number (the so-called Rt). Similarly, with proper science, things could have gone the other way: if random testing had revealed that the prevalence rate including asymptomatics was wider but only spreading slowly or locally; if the real mortality rate was in fact lower and definitely falling; if the actual reproduction number was known and seen to be dropping — then perhaps the quarantine could have been safely lifted even sooner, thus lessening the economic damage and human cost.

But instead the quarantine was relaxed based more or less on hope and a prayer — an expected result when determined lobbying meets shaky science — with the final decision being made by the gut feel of a strongman. Have we opened up too soon, or too late? How safe or dangerous is it to go out? Who knows? We only have the say-so of authorities whose advice to citizens echoes that of Paul to the Philippians (later to haunt Kierkegaard): “Work out your own salvation in fear and trembling.”

Emmanuel S. de Dios is professor emeritus at the University of the Philippines.