The healthcare and welfare sectors have been on the frontlines in tackling coronavirus disease 2019 (COVID-19) itself as well as its impacts on the vulnerable members of the society. At the same time, the pandemic has revealed several concerns and issues that need to be fixed in order to improve the country’s healthcare and welfare systems, which the panelists in the recent session of BUSINESSWORLD INSIGHTS have looked into.

Moderated by BusinessWorld‘s associate editor Timothy Roy Medina, the recent BUSINESSWORLD INSIGHTS session, held last June 3, gathered from esteemed professionals assessments on the current state of the healthcare and welfare systems of the country in light of the pandemic and insights on how these systems can be improved to meet the needs of people amid the ongoing fight against COVID-19.

Managing risks to the vulnerable 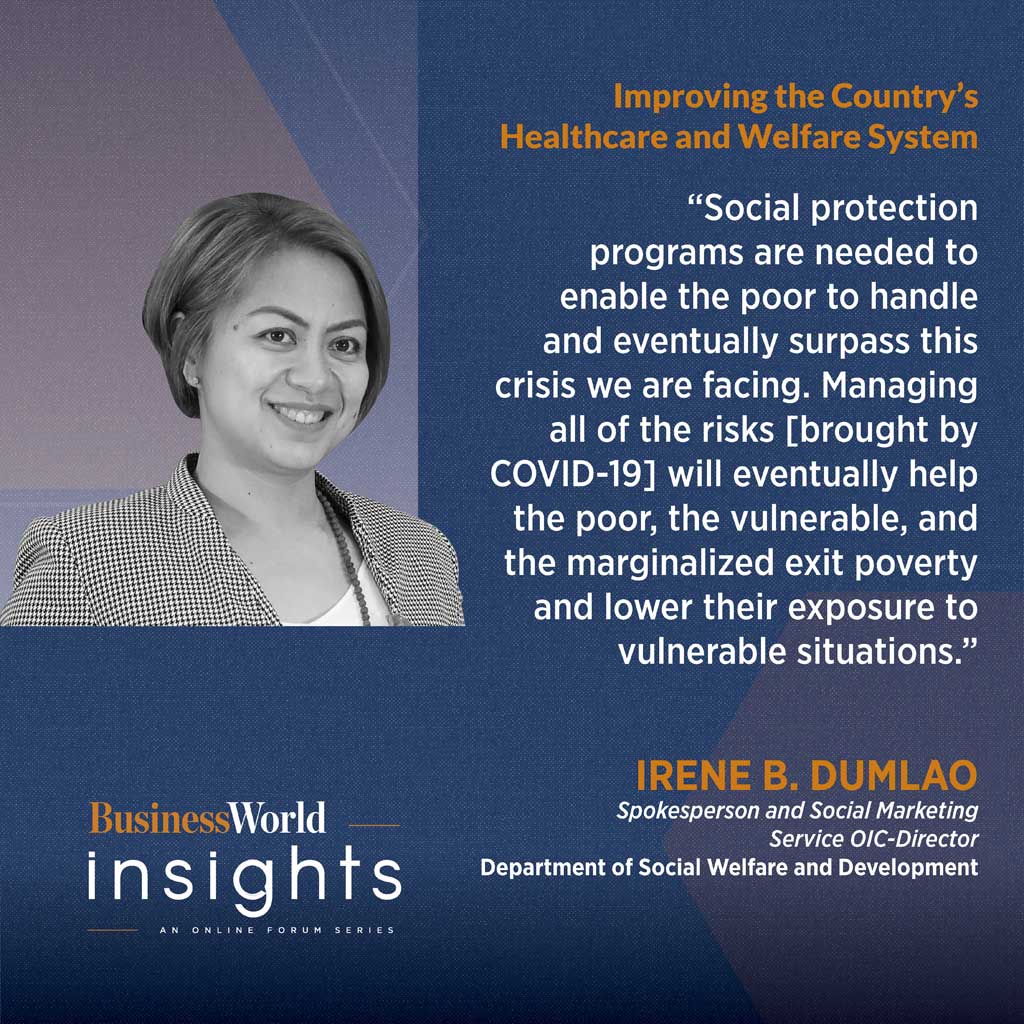 Irene B. Dumlao, spokesperson of the Department of Social Welfare and Development (DSWD) and the social marketing service head of the department, started the online forum by recognizing that the rapid spread of COVID-19 and the continued extent of quarantine measures have brought a severe long-term impact on the poor and highly vulnerable families and individuals.

In response to such impacts, social protection programs are set in place “to protect and prevent people from falling from their current income and consumption levels due to various risks.”

These are also in place to build capacity adaptability and to expand more income opportunities and improve human capital investments in the long-term, she added.

“Through SAP, we helped cushion the impact or effect of the pandemic to poor Filipino families, whose jobs and sources of livelihood have been disrupted,” she said.

The spokesperson reported that the department has partnered with various local government units (LGUs) in delivering the cash aid to Filipino families who belong to the low income and vulnerable sector, which amount to 18 million families.

For the second tranche of the distribution, Ms. Dumlao continued, DSWD would be partnering with the Armed Forces of the Philippines (AFP) and the Philippine National Police (PNP) in distributing the aid to identified recipients.

The department has agreements with several private groups, particularly financial services GCash and Paymaya, in distributing the cash aid. The department has also rolled out its Relief Agad mobile application, which seeks to fast track data gathering and aid distribution of the SAP.

However, Ms. Dumlao noted that the distribution could have been more efficient with a national ID system set in place.

“It could also have been helpful since the system would have been able to link our constituents, our clients, and beneficiaries to banking or financial institutions. That would have expedited the delivery of our aid to them,” she said.

Ms. Dumlao also noted the value in cooperation between the private sector and the government in strengthening the welfare system.

“The government has a big responsibility to promote and protect the welfare of the poor, the vulnerable, and the marginalized. But the private groups also play a significant role,” she said.

With the pandemic posing economic, environmental, and man-made risks to the vulnerable sectors of the country, Ms. Dumlao finds it important for social protection programs to manage these risks in order to prevent families from falling into and being trapped into poverty. 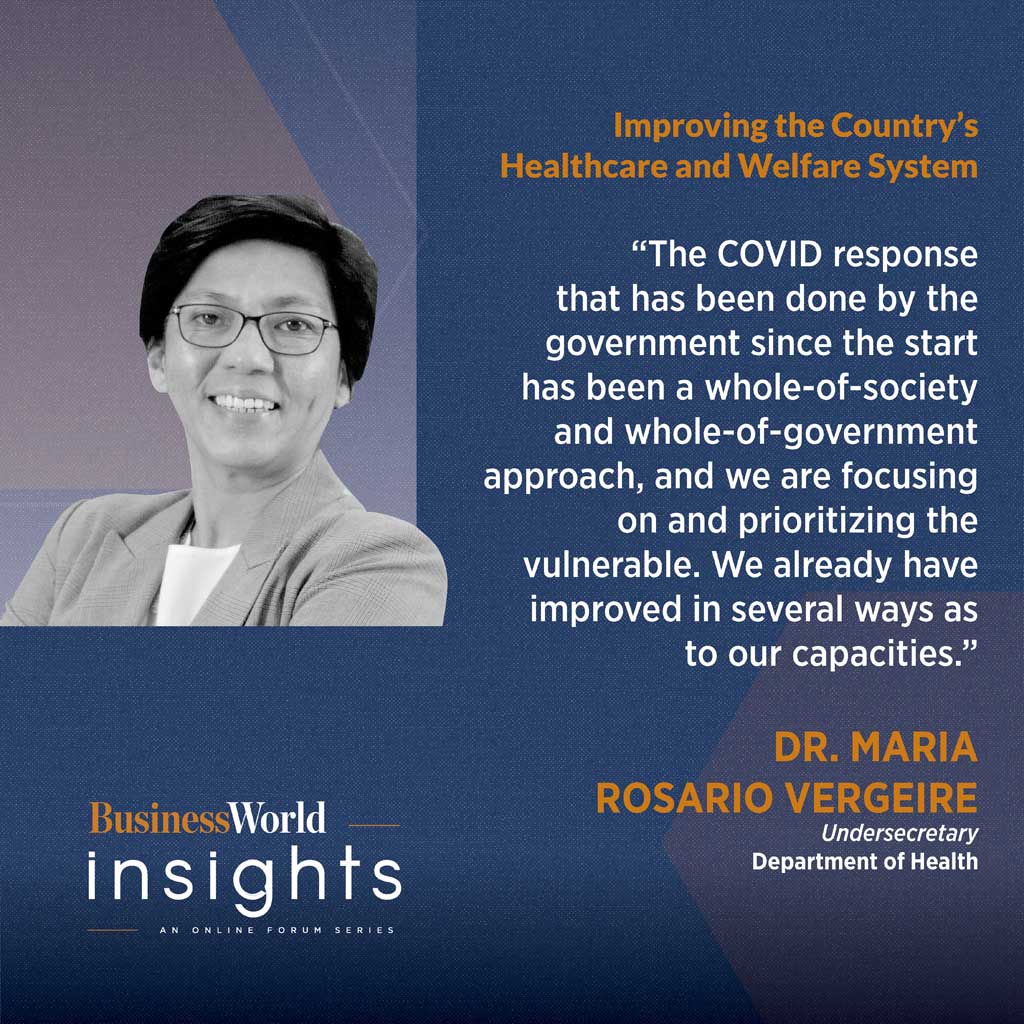 Meanwhile, Dr. Maria Rosario S. Vergeire, Undersecretary of the Department of Health (DoH) highlighted the gradual improvement in the government’s response to the pandemic.

“The COVID response that has been done by the government since the start has been a whole-of-society and whole-of-government approach, and we are focusing on and prioritizing the vulnerable. We already have improved in several ways as to our capacities,” Dr. Vergeire said.

According to the Undersecretary, from just a single laboratory at the onset of COVID-19, there are now a total 52 laboratories licensed by the DoH.

From only 300, the testing capacity has grown to at least around 34,000 rated capacity per laboratories.

The department has an emergency hiring program intended to provide and augment health human resources to our hospitals and quarantine facilities as well as our primary care facilities, she added.

Dr. Vergeire also noted that as the Universal Health Care (UHC) program has initially enrolled all Filipinos to the Philippine Health Insurance Corporation (PhilHealth), individuals who have been affected by COVID-19 has benefitted from PhilHealth rates or benefits packages.

“Prior to April 15, Philhealth covered a whole set of medical bills that only individuals affected by the COVID have incurred,” she said. “But after April 15, they have issued these new benefits packages, especially for COVID-19, [which also cover] pneumonia cases and also testing and quarantine facilities.”

“The other provisions of the law have taken the back seat, but we are very eager to push forward and implement these in the coming months as we go through this pandemic, also realizing that there are still other non-COVID services for health that our people are entitled to,” Dr. Vergeire added.

As to companies who have been doing this mass testing, the undersecretary reminded, DoH’s position still remains on symptomatic screening using the RT-PCR method of testing.

Hospitals in the ‘new normal’ 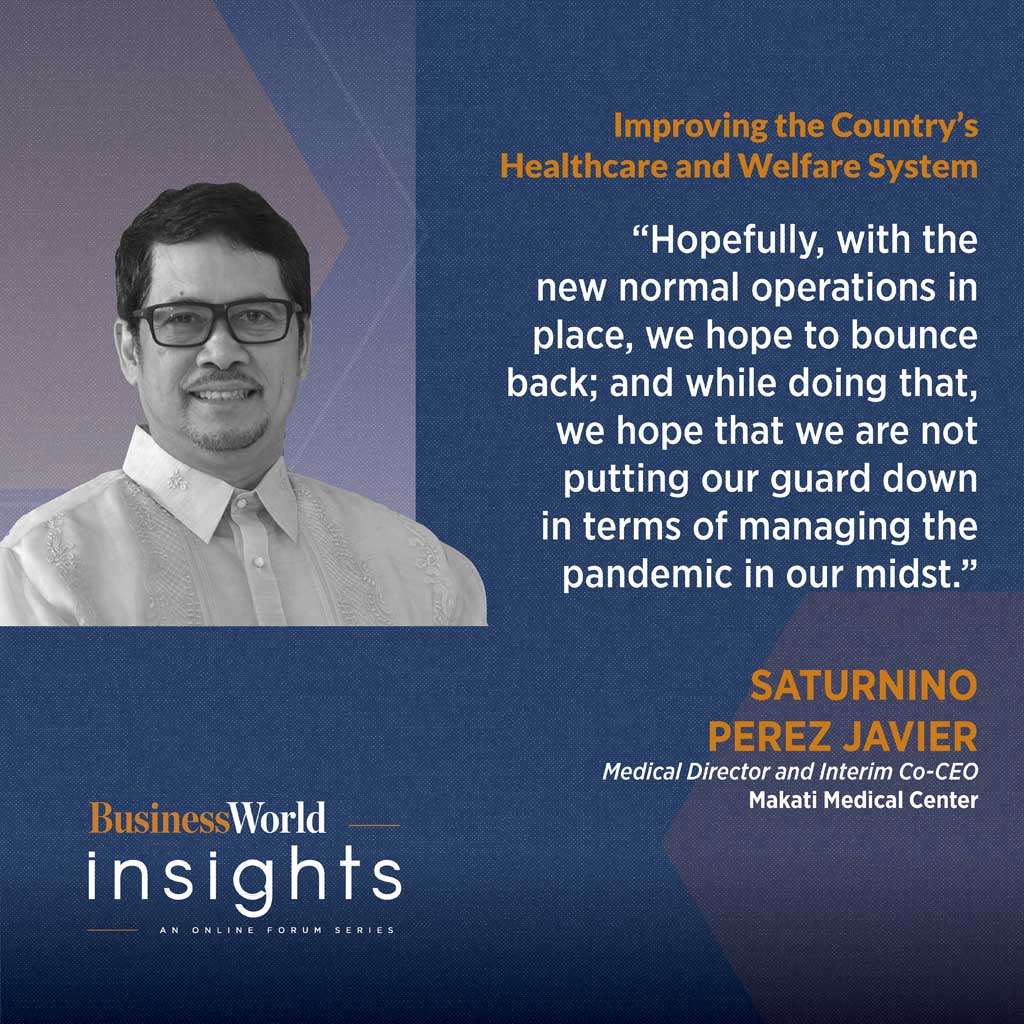 Dr. Saturnino Javier, medical director of Makati Medical Center (MMC), provided a perspective from the medical community by showing how the esteemed medical institution struggled with intensively attending to COVID-19 cases and how it plans to bounce back as it gradually reopens for other patients.

He noted the difficulties hospitals encountered in the past two months.

“You go out of the house, and it seems to be peaceful and quiet. But, it’s a different atmosphere when you’re in the hospital,” Dr. Javier said. “You have the emergency room full of patients on ventilators waiting to be admitted. You have an ICU and COVID wings which are full. Some of your nurses are being quarantined, if not admitted… And while these are happening, PPEs (personal protective equipment) and masks are being depleted, and supplies are running low.”

Hospital has had to confront other issues, he added. One of them is a decrease in occupancy, which has caused a drop in revenues will fall. There was also a halt in elective surgeries as well as closures of clinic offices. Adding to these burdens is the continuous spending in PPEs, some of which Dr. Javier found to have been exorbitantly priced.

From this chaotic situation, according to Dr. Javier, MMC has started moving to a resumption of operations in a gradual, partial, limited, and very conscious manner.

“This is a situation where we try to manage fear, and this fear cuts across sectors — fear of the patients to come back and fear among our healthcare practitioners and professionals to once again embrace clinical practice,” he added.

Ensuring the safety of patients, healthcare workers, and physicians, MMC has put in place measures such as zoning protocols across the hospital, designated traffic routes for patients, and designated hotspots, among many others.

Nevertheless, with safety measures set in place in hospitals, Dr. Javier stressed that people should still do their share in preventing others from getting infected by COVID-19.

“We have to keep in mind that the virus did not go on quarantine. It’s the people who did. The virus is just there. It did not go on vacation. Once it finds a suitable host again it will definitely be causing havoc again,” he said.

Dr. Javier also expressed his support for telemedicine as a platform for meeting patients’ needs in the new normal.

“Even during the height of the pandemic, we have encouraged many of our practitioners to embrace telemedicine to be able to connect with the patients who have no opportunity to visit them at the hospital. This is still being encouraged as we partially resume operations,” he said.

When asked whether he sees any pressure on the supply of medical professionals and nurses amid the pandemic, Dr. Javier recognized that there are manpower issues with the nursing field, while there is not much with physicians.

“When personal security or health issues are on the line, we can’t impose on anyone to stay, especially if there are offers of higher salaries elsewhere. This is a reality we confront and we’re still confronting at the moment,” he said.

For Dr. Javier, action by the government in needed in this matter.

“We really cannot compete with our European countries and the US, especially when the demand for nurses in those areas is much higher. I think that’s one area where we can be helped by the government to put some stop-gap measures to prevent the brain drain,” he stressed.

Regarding legislation that responds to the health crisis, Dr. Javier emphasized that there is no need for additional laws, but existing laws must be implemented very well. In particular, he sees the need to ensure a steady flow of medicine and testing kits as well as to ensure proper regulation of prices of PPEs and supplies. 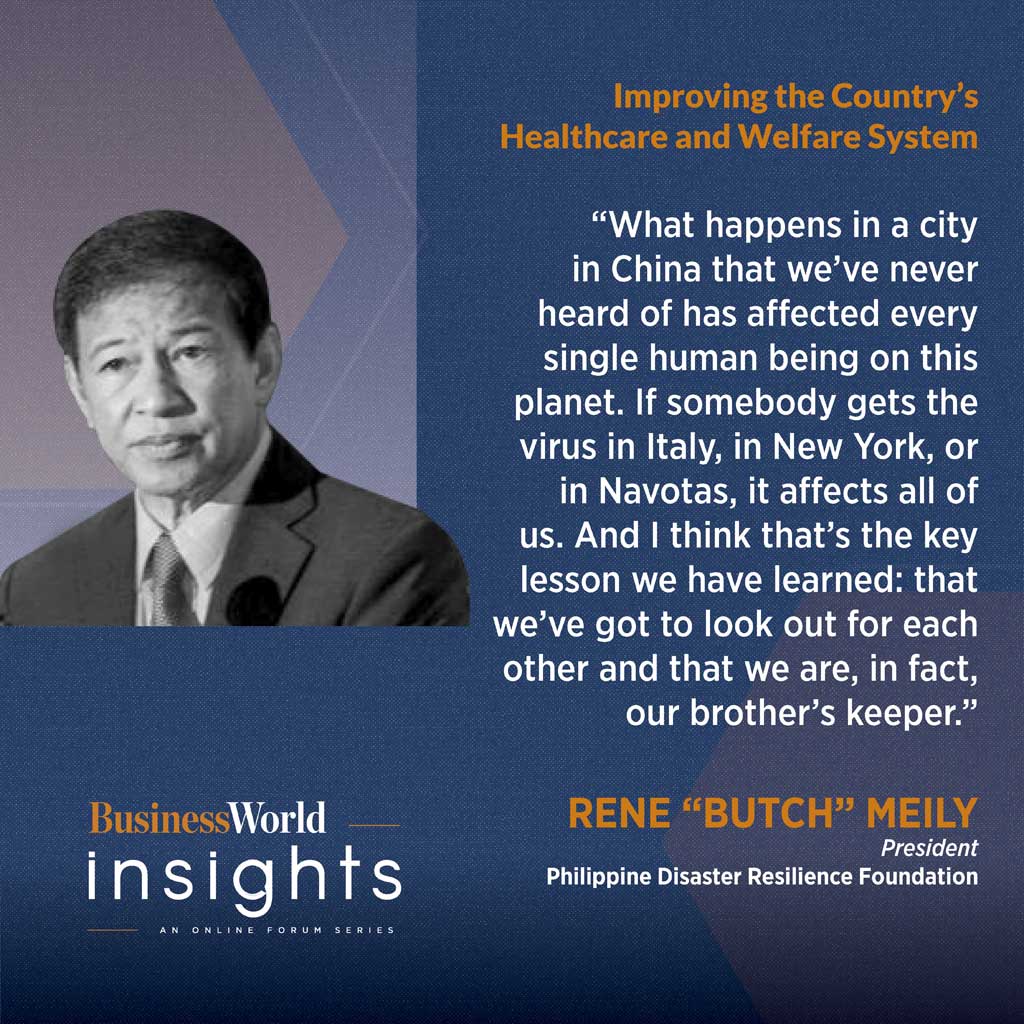 A [stark] difference from previous disasters was spotted by Butch Meily, president of the Philippine Disaster Resilience Foundation (PDRF), in COVID-19. While previous disasters have primarily affected one area of the country, the health crisis has affected the entire Philippines. A similarity, however, was found in terms of reopening the economy, especially the micro, small, and medium enterprises (MSMEs).

One of PDRF’s intiatives in this matter is Project Sikap, which launched a one-stop digital shop for MSMEs where their questions about bouncing back gets to be answered.

Moreover, similar to PDRF’s response to affected sari-sari stores after Supertyphoon Yolanda, it has started helping sari-sari stores in Metro Manila reopen after the COVID-19 crisis, as they found that up to 40% of them have closed — either for health concerns or because many consumers were not able to purchase their goods.

As the foundation interviewed sari-sari store owners, it has found out that 80% to 90% of them are women. “[S]o they play a key role in the recovery of the economy and in holding our families together,” Mr. Meily concluded.

Another lesson learned from responding to the present crisis, according to Mr. Meily is the value of having pre-agreements in place with companies.

Through its pre-agreements with private companies, the PDRF rolled out other initiatives. With the help of package delivery company UPS, it has ferried medical supplies from Manila to outside areas. Through a pre-agreement with online marketplace company Airbnb, health workers were provided with temporary shelters in residences and hotels.

Among the lessons learned from this pandemic, however, the most important to keep in mind is that people are connected, Mr. Meily said.

“What happens in a city in China that we’ve never heard of has affected every single human being on this planet,” he said. “If somebody gets the virus in Italy, in New York, or in Navotas, it affects all of us. And I think that’s the key lesson we have learned: that we’ve got to look out for each other…, that we are, in fact, our brother’s keeper.”