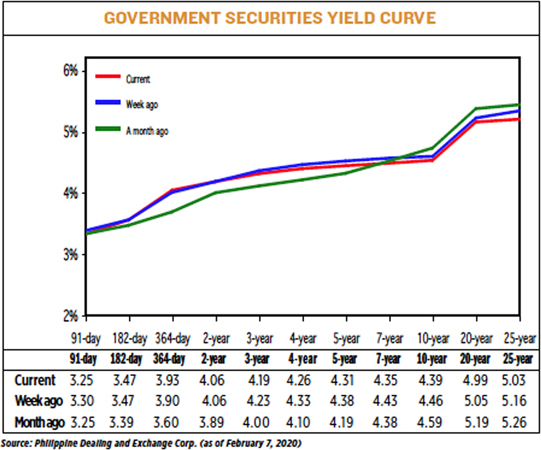 Debt yields, which move opposite to prices, went down by an average of 4.9 basis points (bps) week on week, based on the PHP Bloomberg Valuation (BVAL) Service Reference Rates as of Feb. 7 published on the Philippine Dealing System’s website.

“The decline in local yields was primarily driven by market expectations of a possible policy rate cut from the BSP (Bangko Sentral ng Pilipinas) and lingering concerns over the coronavirus outbreak, which is highly viewed to negatively impact local and global economic activity,” a bond trader said in an e-mail.

“The downward pressure on yields was largely felt toward the long-term end of the curve, mirroring investor worries over the possible economic repercussions of the latest coronavirus outbreak,” the bond trader added.

ATRAM Trust Corp. Head of Fixed Income Jose Miguel B. Liboro shared the same view in a separate e-mail: “Higher-than-expected inflation prompted some profit-taking after the market rally over the last few weeks. The reaction was muted, however, with the market correctly anticipating a cut in the policy rate during the BSP’s Monetary Board meeting on Feb. 6,” he said.

The BSP’s Monetary Board decided in its first review for the year last Thursday to cut key policy rates by 25 bps, bringing the overnight reverse repurchase rate to 3.75% and the overnight deposit and lending rates to 3.25% and 4.25%, respectively.

The Monetary Board also decided to raise its inflation forecast for the year to three percent from 2.9%, but kept its view for 2021 at 2.9%. Both forecasts still fall within the central bank’s 2-4% target.

The decision came a day after the Philippine Statistics Authority reported January headline inflation at 2.9%, its fastest pace in eight months or since the 3.2% reading in May 2019. The 25-bp rate cut also followed 75 bps rate cuts last year and 175 bps of rate increases in 2018 amid a high inflation environment.

Mr. Diokno also said central bank estimates showed the outbreak could dent the country’s economic growth in the first half by an average of 0.3% — by 0.2% for the first quarter and by 0.4% in the second quarter.

For this week, the bond trader said local yields are seen to go up “amid easing concerns” over the coronavirus outbreak, as well as “possible upward pressure in global yields” from a likely stronger US inflation that will be reported on Thursday.

Meanwhile, ATRAM’s Mr. Liboro noted the market has “aggressively priced in” a rally on the sale of the three-year retail Treasury bonds (RTBs) that ended last week, expecting it to move “from its coupon of 4.375% down to the 4.20% level.”

Mr. Liboro was referring to the Bureau of the Treasury’s sale of three-year RTBs that ended last Tuesday, two days ahead of the original schedule following strong demand. The raised amount of P310.8 billion exceeded the previous record-high RTB issuance worth P255 billion in 2017 and P235.935 billion last year.

“Current levels across the yield curve already reflect this and how the security trades upon listing will be the short-term catalyst. Should demand be sufficient to take it below 4.2%, we could see a continuation of the current rally. However, if profit-takers prevent it from moving down past 4.2%, we could see an adjustment higher on the longer-tenor securities as the yield curve reprices,” Mr. Liboro said. — Jobo E. Hernandez