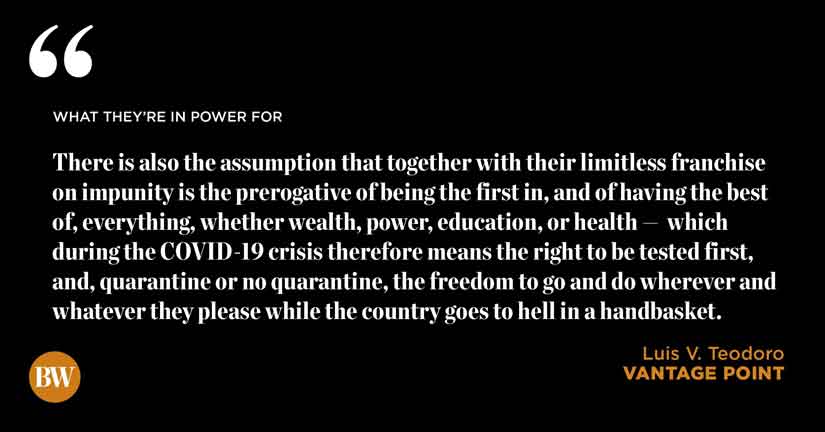 The Department of Health (DoH) has stopped the local government of Marikina City from testing its residents for COVID-19 despite the considerable efforts and costs of setting up the facility. The DoH said it should be located in a separate building all its own.

The disapproval came in the context of the growing public clamor for mass testing. It has been questioned and criticized for being seemingly driven by the intention to prevent some local government units, specially those run by the political opposition, from being perceived by the public as more efficient and caring than the national government.

Whether valid or not, the suspicion is understandable: the DoH hasn’t exactly been immune from politicking during these difficult times. It ruled out mass testing earlier, presumably and understandably because there were not enough test kits for the entire 108 million population of the Philippines. But the Department nevertheless tested President Rodrigo Duterte, his live-in partner and the rest of his family, as well as administration senators, cabinet members and others whom the media habitually refer to as “VIPs,” or “Very Important Persons.”

We can all quite safely assume that the families and kin of these worthies, and most likely even their friends and acquaintances, have also been tested, test kit shortage or no test kit shortage. But the DoH has coyly denied that it tested and has been testing “VIPs” because, well, they’re “VIPs,” and instead said that testing them was and is being done as “a courtesy.” It’s a distinction that defies understanding, since the “courtesy” was obviously extended to such people as Senator and former Special Assistant to the President (SAP) Christopher “Bong” Go because they’re “VIPs.” All have themselves, or through their accomplices and spokespersons, justified the preferential treatment they’ve been getting from DoH because of the “responsible positions” they hold in government.

He has, so far, not used his being a senator and his having once been Senate President as excuses, but both were obviously in the minds of his cohorts in the Duterte administration when they condoned Aquilino “Koko” Pimentel III’s taking his wife to the Makati Medical Center (MMC) last March 24. Pimentel had tested positive for COVID-19 (the results came in while he was at the MMC) but he may have violated existing quarantine protocols as well as those mandated by Republic Act 11332 by going to MMC while he was already under quarantine, and probably exposing its staff and other individuals to the virus. Among others, Defense Secretary Delfin Lorenzana, who heads the COVID-19 National Task Force, dismissed public outrage over the incident by saying that criticism of Duterte ally Pimentel had “gotten out of hand,” while the Department of Justice (DoJ) said it won’t file charges against Pimentel and will “temper the rigor of the law with human compassion.”

Whether the DoJ will similarly “temper the rigor of the law with human compassion” when it comes to ordinary folk for violating quarantine protocols or even for spreading false information (“fake news”) despite the provisions of the so-called “Bayanihan To Heal As One ” or Emergency Powers Act remains to be seen. But no one should bet anything of value that it will, given its and other government agencies’ enthusiasm with prosecuting the poor and the powerless and excusing the wealthy and well-connected.

The latter is a phenomenon with a long history in this country. It’s now widely known as the impunity of the powerful. As everyone knows by now, if a lesser mortal had done what Pimentel did, the Philippine National Police (PNP) would have arrested and thrown him or her into one of the filthy prisons this country is known for without a warrant and without so much as reading him his or her rights.

The preferential treatment of so-called “VIPs” and their exemption from the application of the very laws they themselves pass are based on the sense of entitlement — of having rights and privileges above others including those who voted them into power — that has always been so characteristic of the upper levels of the government bureaucracy. It’s one more symptom of the authoritarian syndrome that afflicts much of officialdom, and which has always been a threat against this alleged democracy.

Unaware that there were journalists present, in 1949, or 71 years ago, Jose Avelino of the Liberal Party (LP) summed up in a few sentences the fundamental but secret conviction of this country’s politicians that being in power means not only being above everyone else but also being exempt from the ethical and legal standards to which ordinary folk are subject.

One of his allies denied that he ever said what one of the journalists present later reported by claiming that the reporter could not understand Spanish, which was the language of choice among the Philippine ruling elite. But time has since confirmed that then Senate President Avelino did ask his partymate, then President Elpidio Quirino, what the point of their being in government was, if, like ordinary mortals, they too can be investigated if suspected of corruption and of violating the law.

During a Liberal Party caucus in Malacañang, Avelino was quoted by journalist Celso Cabrera of the Manila Chronicle newspaper as asking Quirino why he was allowing an investigation into government corruption. Translating his remarks from the original Spanish, Cabrera said Avelino went on to say that if Quirino could not permit abuses, he must at least tolerate them, because that is the prerogative of those in power.

Avelino’s subsequent “What are we in power for” bluster has since become the most indicative statement of all on what values drive the Philippine political class, together with his declaration that “We are not hypocrites,” and “We are neither saints nor angels.” Avelino also said that “when we die we will all go to hell. It is better to be in hell because in that place there are no investigations, no secretary of justice, no secretary of the interior to go after us.”

Avelino’s statements still resonate today, seven decades after they were first made. The words are different and said in what the speakers think is English. But whether it’s a president threatening to kill human rights defenders, a congressman justifying his supposed right to pork barrel funds, or a policeman berating, shooting or beating a confession out of a suspect, they still mean the same. They reek with the same entitlement to, and expectation of impunity — the exemption from prosecution and punishment the powerful believe to be their birthright whatever wrong they may commit that in various forms, words and acts the bureaucrats constantly remind us all is their prerogative.

One can imagine today’s politicians’ asking the same thing as Avelino and company did of their fellows and bosses during their closed-door gatherings, and their demanding that they be exempt from the application of the laws they themselves sponsored, approved, and signed because those are only for the observance of the poor and powerless. But beyond that is also the assumption that together with their limitless franchise on impunity is the prerogative of being the first in, and of having the best of, everything, whether wealth, power, education, or health — which during the COVID-19 crisis therefore means the right to be tested first, and, quarantine or no quarantine, the freedom to go and do wherever and whatever they please while the country goes to hell in a handbasket.

That’s what they’re in power for, and they won’t let anyone forget it.