THE Philippine unemployment rate held steady in June amid an improvement in job quality.

Preliminary estimates of the Philippine Statistics Authority’s (PSA) latest Labor Force Survey put the unemployment rate — or the share of the jobless Filipinos to the total labor force — at 6% in June, unchanged from May, as the total Filipino workforce expanded by 570,000 month on month to 49.581 million.

Year on year, the unemployment rate was an improvement from the 7.7% in June 2021. 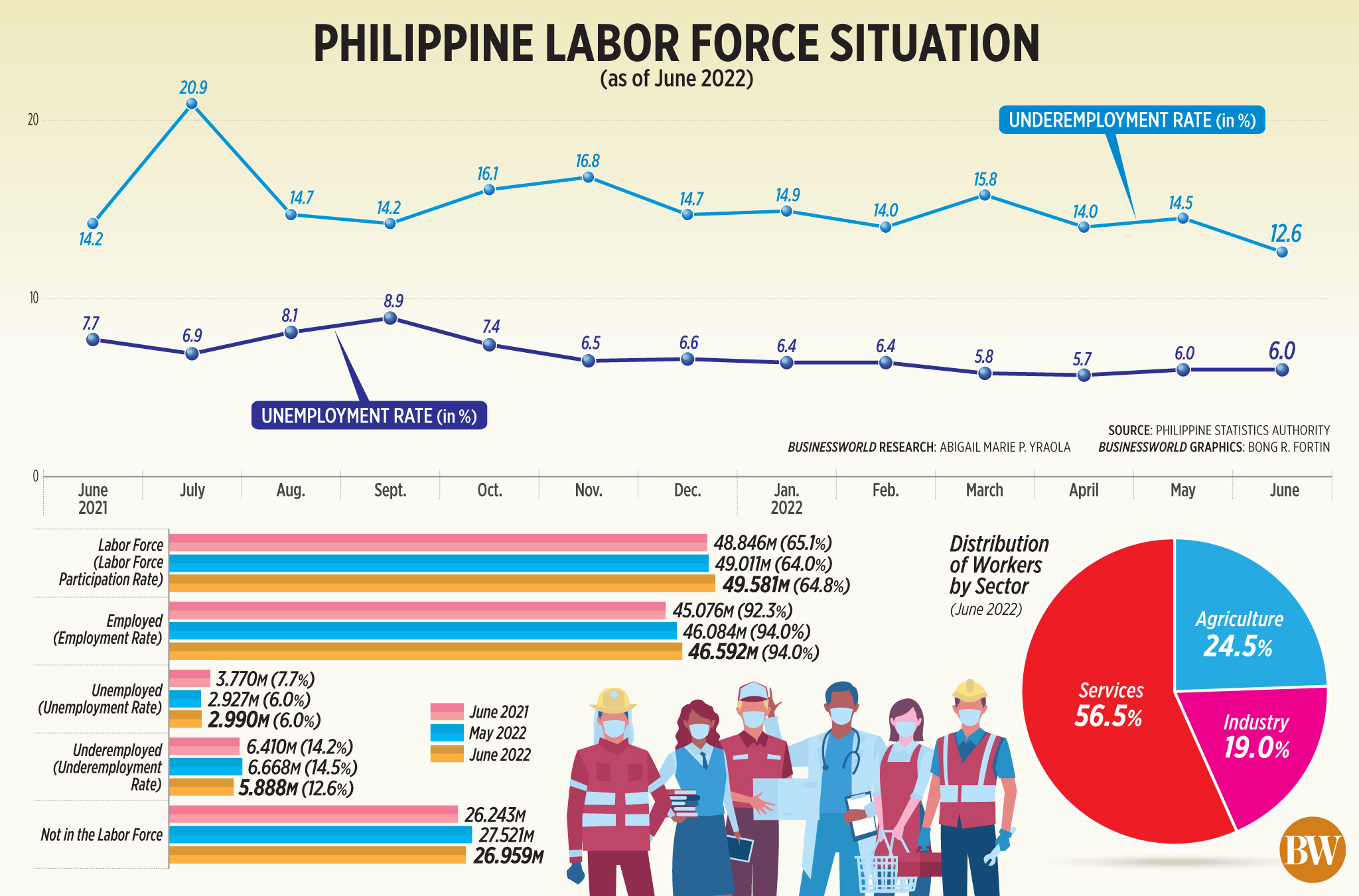 Labor force participation rate (LFPR) — the share of the Filipino workforce to the total working age population of 15 years old and over — went up to 64.8% in June from 64% in May. However, it was lower than 65.1% in June last year.

Still, the June LFPR was the highest in three months, or since the 65.4% in March.

This put the underemployment rate — the share of employed persons who expressed desire to work for more hours, an additional job, or have a new job with longer working hours to the total employed population — at 12.6% in June. This was better than the 14.2% in the same month in 2021, and the 14.5% in May.

This was the lowest underemployment rate in 13 months, or since the 12.3% in May last year.

This was equivalent to a 94% employment rate — the proportion of the Filipinos with jobs to the total workforce — steady from May but an improvement from 92.3% in June last year.

In the first semester, the unemployment rate averaged 6%, lower than 8.1% in the same period last year.

The underemployment rate also improved, averaging 14.3% in the six months to June, from 15.7% a year ago.

By sector, services remained the largest employer in June with 56.5% share, down from 59% in May. It was followed by agriculture with 24.5% (from 22%), while the industry sector remained at 19%.

Wholesale and retail trade shed the greatest number of jobs at 1.217 million to 9.724 million in June.

On the other hand, agriculture and forestry had the biggest jump in employment, adding 1.264 million jobs month on month to 9.993 million in June.

The National Economic and Development Authority said in a statement the country needs a safe reopening of the economy to return to the high-growth path and reinvigorate job creation.

“The latest data show a significant increase in the number of workers employed on a full-time basis,” Socioeconomic Planning Secretary Arsenio M. Balisacan was quoted in the statement as saying.

“While this is a good indication of the improving quality of work in our country, the government should incessantly boost its efforts towards providing an environment conducive to the creation of more and better employment opportunities,” he added.

“As such, the additional capacity required to meet a more open economy resulted in more jobs, a lower underemployment rate, higher labor force participation rate, and higher average weekly hours worked,” he said in an e-mail.

China Banking Corp. Chief Economist Domini S. Velasquez traced the agriculture sector’s jobs increase in June to the harvest season, which may not be sustainable in the coming months.

“Also worrisome is the decline in retail trade employment as it points to a worsening outlook amidst a high inflation and high interest rate environment,” Ms. Velasquez said in an e-mail.

“Decreasing demand for non-essential goods, with households prioritizing essentials amid elevated overall prices, may also lead to a reduction of jobs in non-essential industries,” she added.

INFLATION
Analysts said that inflationary pressures may drive unemployment rate higher in the next months.

Ms. Velasquez said the second semester may be “relatively worse” as businesses deal with rising costs and higher minimum wages, which may push some to lay off workers.

“[E]fforts should be focused on ensuring that Filipinos have sources of income,” she said, adding that the infrastructure program will help create jobs.

Mr. Arogo said the economy continues to recover from the pandemic, but the jobless rate may remain elevated.

“Although we expect full (gross domestic product) recovery to happen by third quarter 2022, unemployment is projected to return close to the pre-pandemic levels only by 2024,” he said.

Peso may decline vs dollar on expectations of faster Sept. inflation

Stocks to move sideways ahead of inflation data

Ayala Land plans up to P19-billion bonds to refinance debt

‘Management prerogative’ is a lazy excuse