By Keisha B. Ta-asan

NET INFLOWS of foreign direct investments (FDI) jumped by 46.3% year on year in February, as the further reopening of the economy lifted investor confidence.

Data released by the Bangko Sentral ng Pilipinas (BSP) on Wednesday showed that FDI net inflows climbed by 46.3% to $893 million in February from $611 million in the same month in 2021. 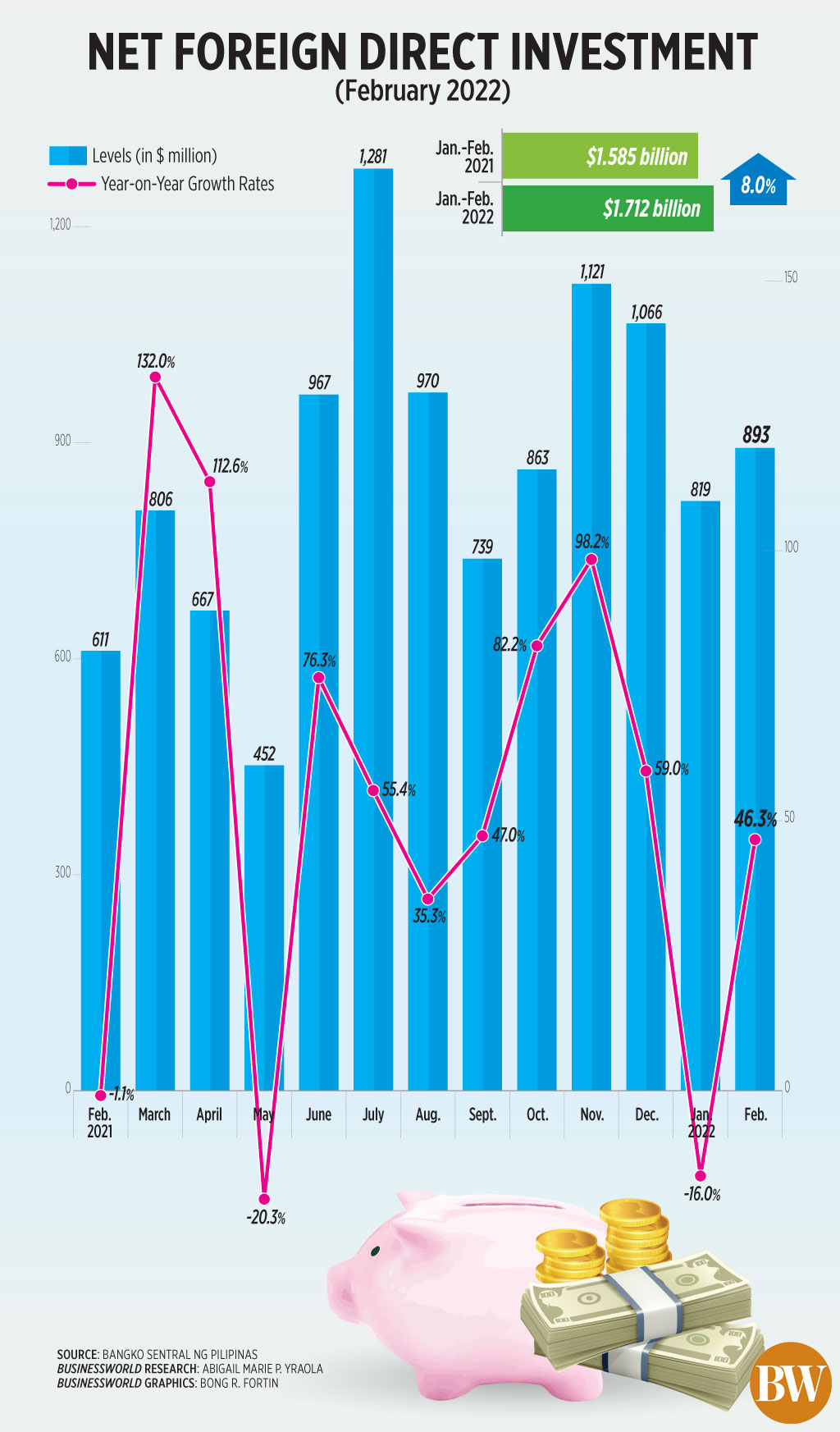 This was the highest monthly FDI inflow recorded since the $10.5 billion in December last year.

“However, just as in January, the bulk of FDI was in debt instruments while equity and reinvestment of earnings was actually negative,” he added.

The government placed Metro Manila and some provinces under Alert Level 2 in February amid the decline in COVID-19 infections.

The BSP said the higher FDI reflected the “continued infusion of funds by non-resident direct investors to their local subsidiaries.”

February data showed a 40.8% increase in foreign firms’ investments in debt instruments of local affiliates to $722 million from $513 million a year ago.

The equity placements were mainly from Japan, the United States, and Kuwait. These were invested mostly in manufacturing, financial and insurance, and real estate industries.

Reinvestment of earnings stood at $74 million in February, slightly lower than $75 million in the same month in 2021.

For the first two months of the year, total FDI net inflows rose by 8% to $1.7 billion, mainly due to the 29.3% jump in foreign investments in debt instruments to $1.4 billion. Reinvestment of earnings was flat at $152 million in the January to February period.

However, net investments in equity capital slumped by 46.7% to $204 million in the two-month period, as placements declined by 49.4% to $234 million. Equity withdrawals also dropped by 62% to $30 million.

“This suggests that although there have been improvements with regard to outlook, most investors are still on the fence on whether to put in more substantial investments into the country,” Mr. Mapa added.

Rizal Commercial Banking Corp. Chief Economist Michael L. Ricafort said in a note that FDIs could continue to go up in the coming months as global economic prospects improve “as some developed countries that are the major sources of FDIs move towards population protection/herd immunity.”

He also noted the lower corporate income tax rates and recent laws that opened up more sectors to foreign ownership would help attract more FDIs into the Philippines.

However, a potential spike in COVID-19 infections here and abroad, as well as a protracted Russia-Ukraine war may hurt FDI inflows, Mr. Ricafort added.

Investors will also be closely watching the incoming administration’s plans as the economy is still recovering from the pandemic.

“In the coming months, we will need to see more clarity on the incoming president’s plans for the economy and Cabinet lineup,” Mr. Mapa said.

“Improved foreign relations with major sources of foreign investments for the new Philippine president after the May 2022 elections would also help further boost more FDIs into the country,” Mr. Ricafort said.