THE COUNTRY’S overall agricultural output shrank by an annual 0.3% by value in the first quarter, due to a decline in fisheries, livestock and crop production, government data showed.

In a report released on Wednesday, the Philippine Statistics Authority (PSA) said the value of agricultural production at constant 2018 prices dipped by 0.3%, a slight improvement from the 3.4% contraction seen in the first quarter of 2021.

“Poultry registered expansion during the period while crops, livestock, and fisheries posted declines in the value of production,” the PSA said. 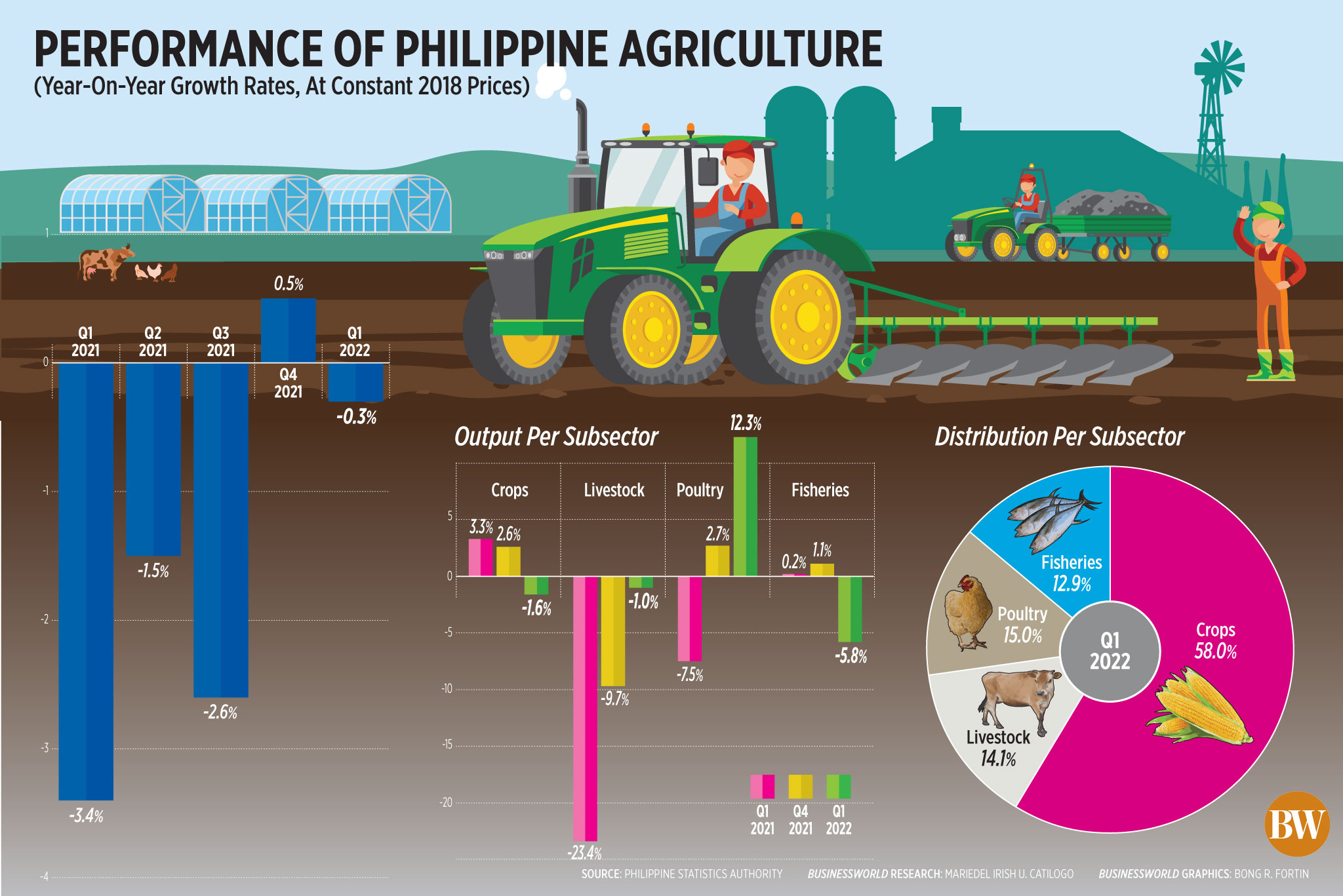 Quarter on quarter, farm output worsened from the 0.5% growth seen in the last three months of 2021.

At current prices, the value of agricultural production went up by 2.1% to P498.61 billion in the January to March period.

The PSA is scheduled to release first-quarter gross domestic product (GDP) data on Thursday morning. Agriculture usually contributes around a tenth to GDP.

Agriculture Secretary William D. Dar said first-quarter agricultural production was affected by the spike in oil and fertilizer prices that began in late February after Russia’s invasion of Ukraine.

“We will study the extent to which recent developments in the global food supply chain, which is severely rocked by the Ukraine-Russia war, have had impact on our local agriculture sector in the first quarter… Crops were affected by skyrocketing fuel and fertilizer prices,” Mr. Dar said in a virtual webinar.

Crop production, which made up 58% of the total farm output, slipped by 1.6% in the first quarter as palay (unmilled rice) and corn production dropped by 1.9% and 0.2%, respectively.

Federation of Free Farmers National Manager Raul Q. Montemayor said that the drop in palay production may be due to the initial effects of higher fertilizer prices and other production costs.

“Farmers had to cut down on input usage which led to lower yield,” he said.

Roehlano M. Briones, a senior research fellow at the Philippine Institute for Development Studies, said poor weather also affected palay and corn output. He also noted that there was “not enough growth” in other crops.

At current prices, the value of crop production went down by 0.9% to P268.13 billion from the previous year’s record.

Meanwhile, livestock production, which accounted for 14.1% of the total, dropped by 1% in the January to March period amid the prolonged outbreak of African Swine Fever (ASF).

“The hog [industry] is still suffering from ASF and unwillingness of some growers to rebuild their inventory,” Mr. Briones said in a Viber message.

However, Mr. Dar pointed to the slower contraction in hog output as a good indication that the repopulation program is working.

As of March 2022, ASF was still active in five regions, nine provinces, seven municipalities, and 12 barangays. The industry has lost three million hogs to the disease or to precautionary culls between 2019 and 2021, the PSA said.

On the other hand, dairy and carabao production rose by 22.2% and 6.5%, respectively.

At current prices, the livestock production value amounted to P89.89 billion, or 9.7% higher than the previous year’s record.

Fisheries output, which has a 12.9% share of total agricultural production, contracted by 5.8% in the first quarter.

“Aside from having an average of 20 typhoons a year, storms are now stronger compared to back then and flooding is vaster and more intense,” Rene Cerilla, Legal and Policy Advocacy Officer of Pambansang Kilusan ng Samahan ng Magsasaka, said in Filipino via Viber message.

The value of fisheries production at current prices dropped by 2.2% to P65.42 billion.

BRIGHT SPOT
Poultry production was the lone bright spot as it registered a 12.3% increase in the first quarter, thanks to higher production for chicken (13%), chicken eggs (12.4%), and duck eggs (11.8%). Duck production, however, slumped by 21.5%.

Poultry accounted for 15% of total production in the three-month period.

“Only poultry registered positive growth, brought about mainly by increased volume of production of chicken, which in turn could have been induced by high prices and low supply of pork,” Mr. Montemayor said in a Viber message.

At current prices, the value of poultry production went up 8.8% to P75.17 billion.

Moving forward, analysts said the Department of Agriculture (DA) must reevaluate its import policies if it wants to really improve local production.

“I think the government must undo its import policy because this has discouraged many farmers from investing and intensifying their production out of fear that prices will fall down when they are harvesting,” Mr. Montemayor said.

Despite the higher budget for the DA, Mr. Montemayor noted that the agriculture sector has been on a decline since 2019.

“We are hoping that the next administration will reverse all these anti-local agriculture policies and programs,” he added.

Mr. Briones said that the next administration must focus on programs ensuring crop diversification and biosecurity for the animal industry.

Energy dep’t to lay down rules for conservation program