Home The Nation Rainy weekend ahead in north, central Luzon with storm Karding 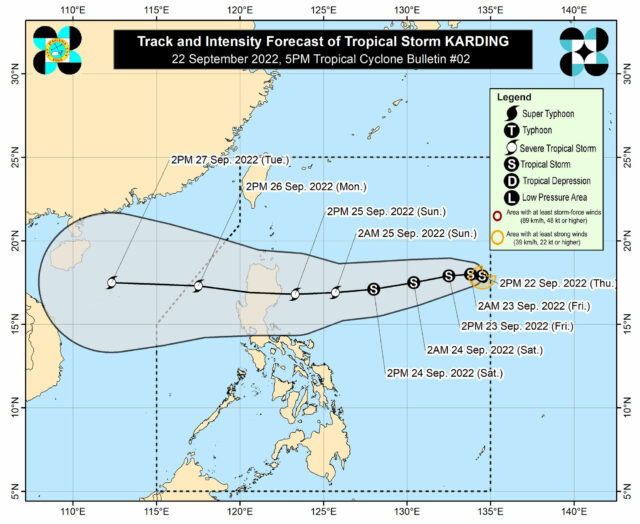 Tropical cyclone warnings up to signal #3 in a 5-level system, which means wind speed of 89 to 117 kilometers per hour (km/h), could be raised over northern and central parts of Luzon, the Philippine Atmospheric, Geophysical and Astronomical Services Administration (PAGASA) said in its Thursday 5 p.m. bulletin.

“Localities situated in the eastern portions of Northern and Central Luzon may be placed under TCWS #1 as early as Friday evening or Saturday early morning,” it said.

Karding, the 11th typhoon to enter the country this year, was located at around 1,320 km east of northern Luzon as of Thursday afternoon, and moving slowly in a northwest direction with winds of up to 65 km/h and gustiness of up to 80 km/h.

“The tropical cyclone is forecast to maintain its westward movement while accelerating until it makes landfall in the vicinity of the east coast of Isabela or Cagayan on Sunday,” PAGASA said.

The weather agency forecasts Karding to continue to intensify while moving over the Philippine Sea and said it may reach severe tropical storm category prior to landfall.

PAGASA advised the public and disaster management offices to prepare for flooding and landslides, especially in areas at high risk of these hazards as well as those that had significant antecedent rainfall.

In late August, tropical storm Florita, with international name Ma-On, passed through the same northern areas where at least four people were reported to have died and about 12,000 families were affected.

Moderate to rough seas are also expected over the northern and eastern seaboards of central Luzon beginning Sunday.

Karding is expected to leave the Philippine area by Tuesday. — MSJ