THE PHILIPPINES outranked other emerging markets in Asia as it moved up one spot to 8th place in the Sustainable Trade Index 2020, according to the Economist Intelligence Unit bi-annual report commissioned by Hinrich Foundation.

The country was given above average scores in both the economic and social pillars to earn an overall score of 55.9 out of a 100 scale in the report released on Tuesday. The Philippines ranked 9th in the 2018 survey.

Out of the 20 Indo-Pacific economies studied for economic growth, social capital development, and environmental protection, the highest ranked countries Japan and South Korea both had scores of 75.1. 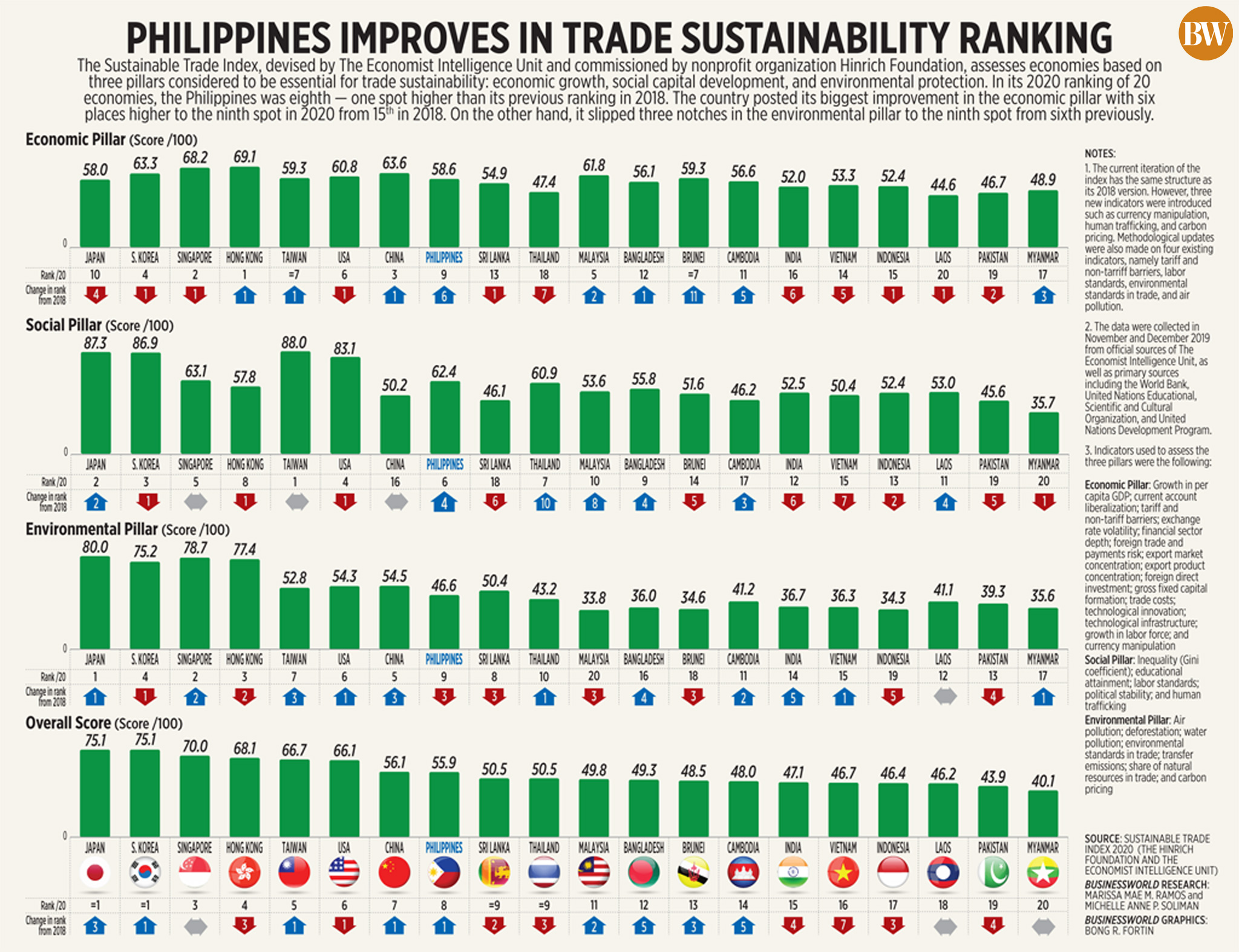 Chris Clague, The Economist Intelligence Unit managing editor and global editorial lead on trade and globalization, cautioned that the Philippines’ improved position is mainly due to holding “steady” in terms of policies and practices rather than implementing “substantial progress.”

The Philippines’ score in the economic pillar rebounded to 9th place, where it was in 2016 before falling to 15th in 2018. The report said that growth per capita GDP improved slightly, along with the depth of the financial sector and gross fixed capital formation.

The country’s economic rank remained around the same in export market concentration, trade costs, and technological innovation, which the report said are indicators where the country needs to make gains.

“Moving up by not regressing is not an encouraging trend for an economy that, like Vietnam, has been marked by many as representing the future of the Asian region,” the report said.

The Philippines also made continued gains in the social pillar, moving up to sixth place from 10th in 2018 and 19th in 2016, although the report noted that it benefited from changes in the labor standards indicator, which was expanded to measure goods produced by forced and child labor.

The social pillar measures inequality, gender discrimination, labor standards, education, political stability, and human trafficking. Under this pillar, the Philippines made advances due to the low volume of goods produced by forced labor and limited gender discrimination in hiring.

“The list of goods produced by child labor in the country, however, is distressingly long and varied, ranging from fruits and vegetables, rice and meat, precious metals and manufactured goods,” Hinrich Foundation said.

“That needs to change, and not just for sustainable trade.”

The Philippines’ environmental pillar score was around the global average, where top countries Japan and Singapore received high scores for their use of carbon pricing schemes and their low water pollution.

The Philippines was classified as a low-income economy, along with Bangladesh, Cambodia, India, Indonesia, Laos, Myanmar, Pakistan, Sri Lanka, and Vietnam.

The ranking of other Asian emerging markets dropped, including Sri Lanka which fell from 7th to 9th.

Vietnam, which Mr. Clague described as the “region’s current darling in terms of shifting supply chains,” saw the biggest decline to 16th.

“It’s probably useful to question that narrative… Vietnam has potential, to be sure, but in terms of population… and there’s a limit to the amount of global supply chains that can be diverted to the country,” he said.

Japan and South Korea shared the top rank, the first time that two countries tied in the index.

“Japan and South Korea are two of the only three countries in the index that have carbon pricing schemes in place, for that they are rewarded with a higher score in the index,” Mr.  Clague said during Tuesday morning’s press briefing ahead of the Sustainable Trade Index 2020 launch.

Carbon pricing is a new indicator included in the environmental pillar of the sustainability evaluation.

Hong Kong, which led in the 2018 index, dropped to 4th. Singapore was 3rd while Taiwan, the United States, and China were ranked 5th to 7th, respectively.

The third edition of the report also assessed the importance of sustainable trade for developing more resilient national and community-level economies in the face of the coronavirus pandemic.

“The COVID-19 (coronavirus disease 2019) pandemic has provided a stark and painful reminder of why the concept of sustainable trade is so critical,” Hinrich Foundation Founder and Chairman Merle A. Hinrich said in a statement.

“Imbalanced trade practices have played a key role in aggravating the health, economic and social outcomes of the pandemic. It is now crucial for Asia to strike a balance between short-term goals and long-term resilience — especially as it looks to recover from COVID-19.” — Jenina P. Ibañez and Marifi S. Jara

LANDBANK expects to sign SPA for stake in bourse this week