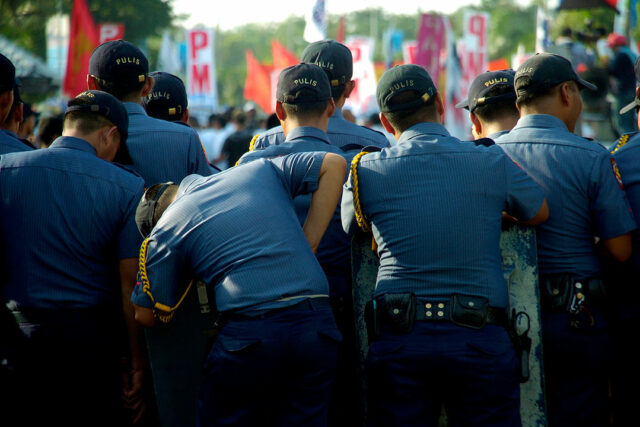 THE GOVERNMENT of President Rodrigo R. Duterte continues to commit atrocities with impunity, a human rights group said on Monday, a year after law enforcers killed nine activists in raids in the Calabarzon region.

Government prosecutors should probe the country’s anti-communist task force for the “bloody Sunday” raids that killed the activists and led to the arrest of four others, Karapatan Deputy Secretary-General Roneo Clamor said in a statement.

Government prosecutors should also probe Mr. Duterte, and his former police officers “if it wants to serve genuine justice and not merely punish a few scapegoats, he added.

The National Bureau of Investigation (NBI), after a recommendation by a task force formed by the DoJ, filed murder charges against 17 policemen allegedly involved in the raids last year.

The killings and arrests during the operations were reminiscent of police executions of unarmed civilians who were sleeping during similar raids, Mr. Clamor said.

“Even when they pleaded for their lives, they were mercilessly murdered,” he said, noting that illegal weapons were later planted in their homes to make it appear like the victims had fought back. This had been used by police in Mr. Duterte’s anti-illegal drug campaign, he added.

Despite the charges filed by the NBI, Karapatan stressed that Mr. Duterte and officials of the country’s anti-communist task force should be held accountable for the “rampant impunity.”

The raids last year were dubbed as “bloody Sunday” and were based on 24 search warrants issued by trial courts in Manila and Quezon City.

“The Philippines will remain positively engaged with the international community and all human rights mechanisms on all issues concerning rule of law and institutions in the country,” he said. “But we will draw the line between parties that engage in good faith, and those that abuse and exploit these mechanisms to make demands of accountability with little or no factual basis,” he said.