Home Editors' Picks Police let workers in essential sectors to be driven to, from work 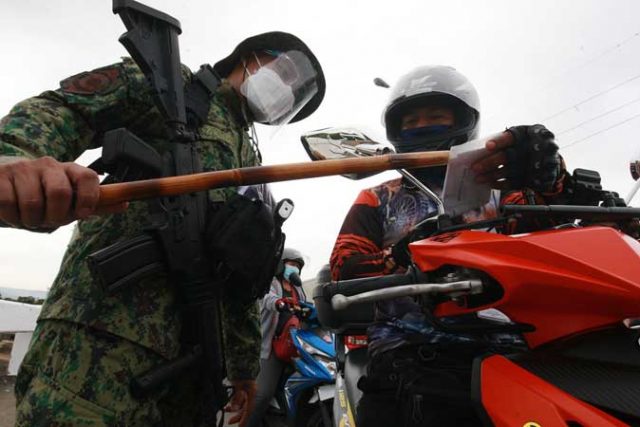 PHILIPPINE police on Thursday said nonessential workers would now be allowed to drive and fetch people working in essential sectors during the two-week enhanced lockdown in the capital region.

Drivers of private cars must show proof that they will fetch essential workers such as a certificate of employment of the woke or a copy of his employer’s business permit national police chief Guillermo Lorenzo T. Eleazar told radio.

On Wednesday, the police chief said frontliners would be barred from being driven to their work places, and should instead drive the car on their own, or take public transportation. The rules apply when they go home.

He said they would not allow the practice because it could be abused by nonessential workers who might use it as an excuse to unnecessarily go out of their homes during the strict lockdown.

Mr. Eleazar had noted that public transportation would still be available during the enhanced community quarantine on Aug. 6 to 20.

The Commission on Human Rights (CHR) on Wednesday police to review the ban, which it said “jeopardizes (essential workers’) ability to carry out their crucial roles in combatting the pandemic.

The prohibition also exposes them to higher risk of infection because there was no guarantee that there would be enough public utility vehicles during the lockdown, CHR spokesperson Jacqueline Ann C. de Guia said.

“The negative impact on frontliners’ ability to perform their duties is far worse than the harm or abuse they seek to prevent from this policy,” she added.

She further noted that the government should focus on seeking ways to support the country’s frontliners in fulfilling their duties.

Senator Panfilo M. Lacson said the earlier ban was “impractical if not illogical.” “They may want to exert a little extra effort to find a possible win-win solution,” he said in a statement.

He added that there might be a way to satisfy both health concerns and a little convenience for people allowed to go out “to feed their families or render indispensable service to others, like health workers and other frontliners.”

Senator Ana Theresia Hontiveros-Baraquel also welcomed the change of plan., noting that legitimizing motorcycle taxis and increasing the budget for service contracting to decrease the long lines and overcrowding in transportation might help solve the problem.

“Before releasing such guidelines, our institutions should carefully discern and take into consideration the plight of ordinary workers,” she said.

Mr. Eleazar said police would conduct random checks of documents, falsification of which could lead to charges. Company shuttle services would be encouraged, he said.

The presidential palace on Wednesday ordered agencies in the Philippine capital and nearby cities to reduce their on-site workers to 20% during the two-week enhanced lockdown meant to contain a more contagious Delta coronavirus variant.

Only agencies that provide health and emergency, laboratory and testing, border control and other critical services can fully operate, according to a copy of an Aug. 3 memo signed by Executive Secretary Salvador S. Medialdea.

The palace urged offices under Congress, the Judiciary, independent constitutional commissions and bodies, and local governments in the capital region to adopt the executive memo.

Metro Manila will be under a hard lockdown from Aug. 6 to 20 to contain a fresh surge in coronavirus infections believed to have been triggered by the Delta coronavirus variant from India. — Bianca Angelica D. Añago and Alyssa Nicole O. Tan