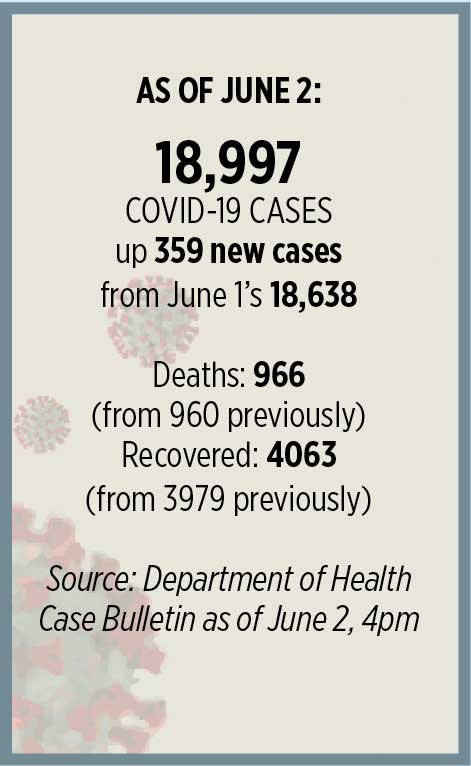 SENATORS on Tuesday asked the Department of Transportation (DoTr) to provide clearer plans for the public after the easing of quarantine restrictions on June 1 left commuters in the capital in a crisis. Senator Ma. Lourdes Nancy S. Binay slammed the DoTr for failing to plan accordingly for the expected number of people reporting back to work. “DoTr knew that Metro Manila and the rest of the regions will soon be transitioning to the new normal. They knew that 30% of those in NCR (National Capital Region) will start going to work by June 1,” she said in a statement. She also hit the department for deploying a truck as free transport for commuters stuck on the road, which compromised health and distancing protocols. Senator Risa N. Hontiveros-Baraquel, for her part, recommended that the government adopt a service contracting program in partnership with the private transportation sector. “Wala ring magagawa ang pag-limit sa pasahero sa mga tren at bus, kung sa kalsada pa lang ay exposed na sila sa health risks habang sila ay nasa mahaba, dikit-dikit at matao na pila (Limiting passengers in trains and buses would be pointless if people are exposed to the risks while waiting on the road, or in line),” Ms. Baraquel pointed out. Under the service contracting scheme, the government will pay operators and drivers per kilometer of their routes to transport people. — Charmaine A. Tadalan

A DOCTOR at the Davao Oriental Provincial Medical Center is the latest coronavirus case in the province, and 58 of the hospital staff, mostly nurses, have been identified among his direct contacts and been placed under quarantine. In a statement, the provincial government said the 32-year old doctor for internal medicine was also rendering duty at a dialysis facility in Davao City. He has previously tested negative for the coronavirus disease 2019 (COVID-19) based on a May 14 result, but was subsequently subjected to another round of testing following protocols set by the province for all frontline workers. Apart from the medical staff under quarantine, seven patients who have received direct care from the doctor have also been isolated at the hospital. Contact tracing is ongoing for another seven of his patients who have been discharged. “(T)he contacts of the COVID-19 positive case will be swab tested between June 2-4, 2020, given that the seventh to tenth day from the last exposure is the ideal time to get more accurate results. However, those who are already exhibiting symptoms have to be swabbed immediately,” the provincial government said. The hospital has also undergone disinfection measures. Davao Oriental had three cases, all of whom recovered, until May 28. It recorded 12 new cases on May 29, with eight returning overseas workers and four locally-stranded residents.

BAGUIO
Baguio, meanwhile, reported on Tuesday that a nurse at the Baguio General Hospital and Medical Center tested positive for the disease, the city’s 35th active case. The 38-year old nurse is now at the hospital’s isolation facility and contact tracing as well as disinfection protocols are being undertaken, according to the city officials. Of the total confirmed cases, 29 have recovered. — MSJ