A GROUP of business organizations asked the Supreme Court and the Department of Justice to immediately assess the cases of inmates vulnerable to the coronavirus disease 2019 (COVID-19) for their possible early release. In a letter to Chief Justice Diosdado M. Peralta and Justice Secretary Menardo I. Guevarra, the Judicial Reform Initiative (JRI) joined calls for the release of inmates who are at high-risk to contracting COVID-19, saying that “severely crowded” detention facilities are fertile ground for the proliferation of the highly communicable disease. “The Judicial Reform Initiative is respectfully requesting your good Office with the Parole and Probation Administration, to initiate a motu proprio review and assessment of the cases of the persons deprived of liberty (PDLs) highly vulnerable to COVID-19 for possible recommendation to the President for commutation of sentence and early release,” the letter read. The group noted the report of the Bureau of Jail Management and Penology indicating that jail congestion reached 600% as of April 2018. “We understand that this would be a difficult challenge to the penal system of the country. However, we humbly urge you to expedite these measures in order to prevent further spread of COVID-19 and mitigate the risks to those who are most vulnerable without sacrificing the better interest and safety of the many,” JRI said.

SC SESSION
Meanwhile, the Supreme Court justices will hold an en banc session on Friday, April 17. “Atty. Ed(gar O.) Aricheta, the Clerk of Court En Banc, confirms the meeting of the Supreme Court En Banc on April 17, 2020,” Public Information Chief Brian Keith F. Hosaka told reporters. He, however, said he is not “privy” to the agenda of the meeting. Among the urgent cases pending before the high court include the petition of more than 20 prisoners for their temporary release through bail on humanitarian grounds due to the high risk posed by COVID-19. The SC has directed drastic reduction of work in all courts and operation of a skeleton workforce to mitigate the spread of COVID-19. — Vann Marlo M. Villegas

OVER three million families have already received their emergency subsidies from the Department of Social Welfare and Development (DSWD) to help cope with the enhanced community quarantine, a government official reported. In a briefing Wednesday, Inter-Agency Task Force on Emerging Infectious Diseases Spokesperson Karlo Alexei B Nograles said they have given nearly P1 billion worth of aid to families who are not part of the government’s cash transfer program known as Pantawid Pamilyang Pilipino Program (4Ps). “A total of P922 million worth of emergency subsidies have been distributed to 170,989 low income, non-4Ps families,” Mr. Nograles said. The DSWD has also distributed assistance worth P61.9 million to 13,135 people for concerns relating to COVID-19 under its Assistance to Individuals in Crisis Situations program. Meanwhile, 328,282 farmers have availed their P5,000 cash assistance under the Department of Agriculture’s (DA) Rice Farmers Financial Assistance Program, according to Mr. Nograles. The program aims to help 600,000 farmers affected by the ongoing lockdown. Another 46,575 farmers also received P5,000 under the SureAid and Financial Subsidy for Rice Farmers of the DA. — Gillian M. Cortez 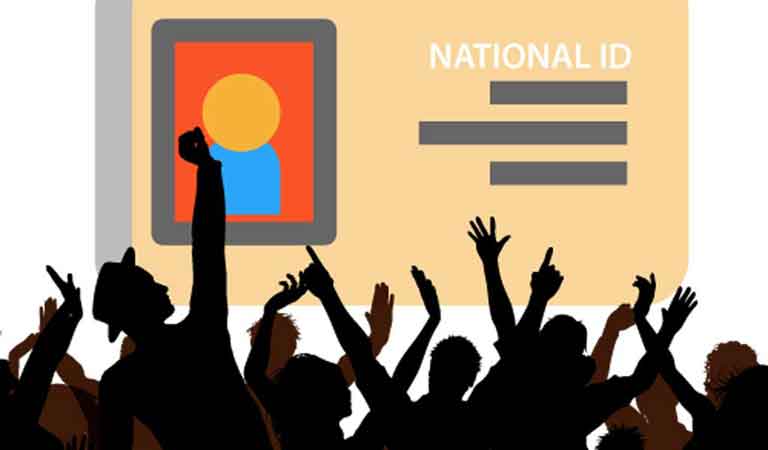 A SENATE resolution filed on Wednesday seeks to look into the rollout of the national ID system, which is seen to improve the distribution of cash assistance to families affected by the lockdown measures relating to the coronavirus disease 2019 (COVID-19) outbreak. Senate Resolution No. 352 directs the conduct of an inquiry on the status of implementation on the programs under Republic Act No. 11055, the Philippine Identification System Act, signed in August 2018. “Almost two years from its enactment into law and the approval of its IRR (Implementing Rules and Regulations), there seems to be no significant headway on its implementation,” the resolution read in part. Senate President Vicente C. Sotto III and Senator Panfilo M. Lacson noted that several elected officials are calling for the full implementation of the national ID system for a more effective distribution of the emergency cash subsidy. The government has provided a P5,000-8,000 monthly cash assistance to 18 million low-income households. Its distribution, however, has been delayed as concerned agencies struggle to consolidate a database of targeted beneficiaries. Mr. Sotto said the hearing will be conducted once sessions resume. Congress is currently on a March 13-May 3 break. — Charmaine A. Tadalan

A LEGISLATOR has asked President Rodrigo R. Duterte and the Inter-agency Task Force (IATF) against coronavirus disease 2019 (COVID-19) to direct state-owned Philippine Health Insurance Corp. (PhilHealth) to shoulder the full hospitalization cost of infected patients. “I am appealing to the President and the IATF to reverse the decision of PhilHealth to limit the treatment cost it will shoulder. It is the poor who will suffer from that decision, and I am sure the President will not allow that,” Cagayan de Oro Rep. Rufus B. Rodriguez said in a statement on Wednesday. He made the appeal citing a report that an unnamed private hospital in Metro Manila billed a “moderate case” COVID-19 patient P1.1 million for an 18-day confinement-treatment. PhilHealth initially announced full coverage for the new disease’s treatment, but this will now apply only until April 14. Under the new policy beginning April 15, set package rates will be paid for by PhilHealth based on the severity of the related illnesses. — Genshen L. Espedido

TRADE Secretary Ramon M. Lopez called on manufacturers to help produce disinfectant alcohol as demand grows with the coronavirus disease 2019 (COVID-19) pandemic. Existing local alcohol manufacturers have seen a year’s worth of demand in two months, he said in a briefing on Wednesday. “Marami nag–te-twenty four hour operation ngayon, pero sa tingin natin kukulang pa — not enough. Nakaka-supply sila pero oras na paglapag ng supply sa groceries at supermarkets, mabilis nauubos (Many are operating for 24 hours, but we think it will still fall short — not enough. They can supply but as soon as the supplies reach the groceries and supermarkets, they run out quick),” he said. He noted that there are manufacturers from other sectors that are now producing alcohol. San Miguel Corporation, Alliance Global Group Inc., and LT Group (Asia Brewery Inc., Tanduay Distillers Inc.) are among the companies that said they would produce and donate disinfectant alcohol. Media research agency Kantar Media Philippines, in a press release on Tuesday, said Philippine rubbing alcohol purchases rose by 124% in February compared to the same month last year. — Jenina P. Ibañez

Driver’s license may be confiscated for transporting unauthorized persons

DRIVERS caught transporting people who should be staying home amid the enhanced community quarantine will have their license confiscated, Philippine National Police — Highway Patrol Group Director Eliseo D.C. Cruz said. In an interview over radio DZBB on Wednesday, Mr. Cruz said they have been given authority by the Land Transportation Office to issue a ticket or temporary operators’ permit (TOP) for such violations. Penalties and fines under the issuance of TOP will apply for drivers who are caught transporting so-called “unauthorized persons outside residence,” he said. Authorized persons outside residence are those involved in the delivery of basic services, essential goods and utilities, and private individuals with a local government-issued pass to avail of these services. Members of the Executive branch’s skeleton force and capital markets are also allowed to go outside their homes. — Genshen L. Espedido